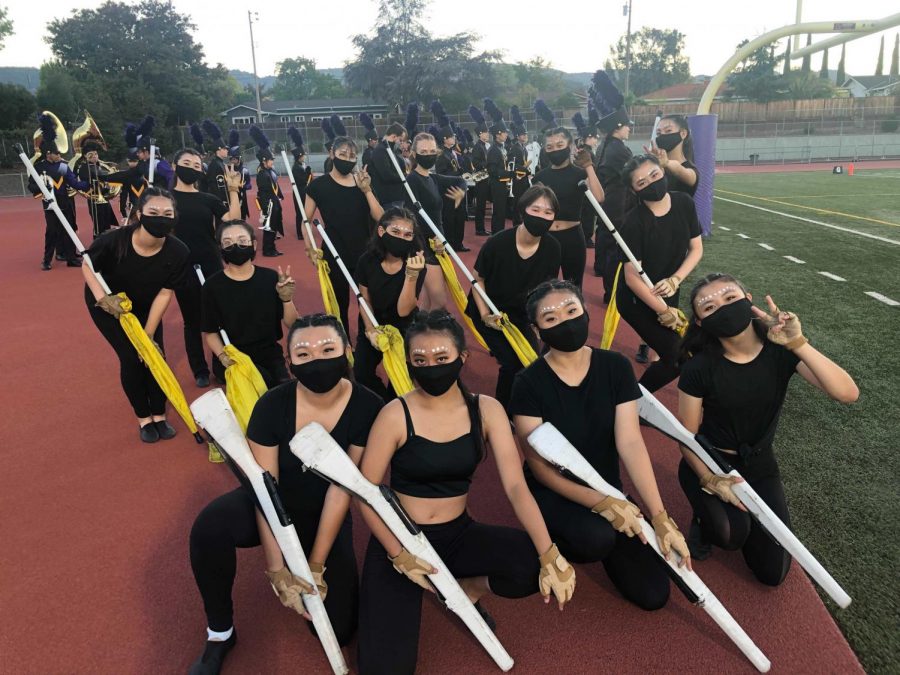 Members of the Color Guard pose for a photo before their performance in the first football game of the season.

The COVID-19 pandemic was a huge obstacle for the MVHS Color Guard team, with social distancing protocols forcing the team’s regular practices to transition online. Now that in-person practices are allowed, sophomore Medha Singamsetty, a second-year team member, compares how it was harder to learn last year than this year.

According to Singamsetty, regular in-person meetings allow members to receive more feedback from the instructors and develop the essential bonds needed to maintain a strong team.

“[We are] able to actually see and get corrections in real-time, so you know what you’re doing wrong,” Singamsetty said. “… We have a group chat so we can actually talk with each other. [Last year, it] was hard to learn. Let’s say we were doing a different type of spin: you couldn’t see what the instructors were doing.”

As a captain, senior Vy Pham said she had a hard time communicating with the members online. Another difficulty junior and lieutenant Katherine Chui faced was the lack of motivation to participate during Zoom practices.

“The good thing about being in person is that learning choreography, or just learning anything in general, is a lot easier because the coaches are right in front of you,” Chui said. “And mirroring on Zoom was not the most ideal thing.”

According to Pham, last year, the focus of the team was largely based on technique due to the lack of an audience. This year, the team is transitioning back to focusing on performances. Even though the members were able to practice in person before hybrid learning started, performances were presented to an audience through YouTube videos. Chui believes that the videos were a step up from online recording.

“We were able to film our show and actually have formations throughout our show,” Chui said. “Whereas, if we just filmed it online, it would have just been Zoom squares.”

Additionally, Pham believes that filming the show instead of performing it live had some positives, since they could take as many video recordings as they needed. While in person, they had one chance to perform for a live audience — now, they could strive for perfection.

The sudden changes as a result of this transition were rough for Singamsetty. This year, she describes an increased time commitment and a rise in rigor.

“Now they’re longer practices — three to six hours during the weekdays and another six or seven hours on the weekend,” Singamsetty said. “It’s a lot harder to transition, I would say. It hasn’t been too hard, but it hasn’t been easy.”

The transition also posed a marketing problem for the team. Pham thinks it was harder for the team to “reach out and find members” as they came back. However, she hopes that their activities in person will inspire more people to join the team.

Not only does being in person have the potential to be inspirational to those wanting to join the team, according to Chui, it also energizes those who are already in Color Guard.

“In the beginning, everybody was a bit scared, because COVID was still going on,” Chui said. “But at the same time, we’re kind of excited, because we can all see each other. It’s been probably a whole entire year since the team has been together.”

While both Chui and Pham have experienced Color Guard in person, the transition has especially increased Singamsetty’s enthusiasm and passion.

“I’m excited, especially since there’s a competitive element now,” Singamsetty said. “It’s also going to be fun to show a bunch of people what we’ve been doing, because last year [it] was only one isolated video on YouTube, but here, it’s actually a field show. There are people in the audience [now].”