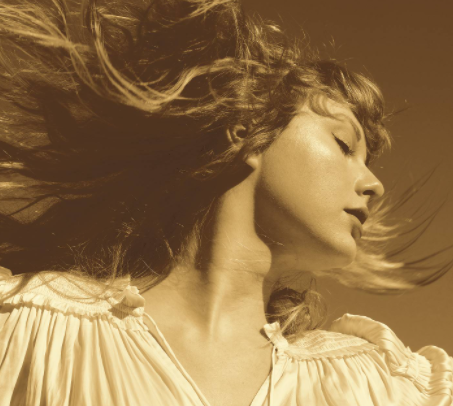 On April 9, 2021, singer-songwriter Taylor Swift released “Fearless (Taylor’s Version),” the re-recorded version of her 2008 album “Fearless.” “Fearless (Taylor’s Version)” contains 26 tracks and had the biggest release of 2021 at the time, debuting at No. 1 on the Billboard 200. 20 of the songs on the album are re-recorded, but the other six are “From the Vault” tracks — songs that Swift wrote while putting together the original “Fearless” but didn’t release until now.

“Fearless (Taylor’s Version)” is the first of five albums that Swift plans to re-record. Her former record label Big Machine Records owns the masters of her first six albums, which means they have the legal rights on the original versions of the songs. In 2019, Scooter Braun, the head of Ithaca Holdings, bought her masters for $300 million. Swift claims that Braun bullied her for years and said, “When I left my masters in Scott’s hands, I made peace with the fact that eventually he would sell them. Never in my worst nightmares did I imagine the buyer would be Scooter.”

Swift then left Big Machine Records to join Universal Music Group and decided to re-record her first five albums so that she could own her songs.

Freshman Varsha Bharadwaj has been a fan of Swift for 10 years, ever since her dad showed her the music video to “You Belong With Me,” one of the singles on the original “Fearless.” She recalls feeling mixed emotions when Swift announced she would be re-recording the album.

“There’s two sides,” Bharadwaj said. “First, I was kind of mad that she had to go through the whole re-recording thing because her masters were stolen. But then the thought of hearing all these old songs, all these country-style songs, in her now mature voice just was super exciting.”

Unlike Bharadwaj, junior Sudhit Rao became a fan of Swift this year when he was re-introduced to “Blank Space,” a single from Swift’s album “1989.” Rao then began to listen to more of Swift’s music, and he recalls being surprised when he heard that Swift was re-releasing “Fearless.”

“If you really looked into it, you would see some news about all the drama going on with her and her previous record label,” Rao said. “But I was just starting to enjoy the original ‘Fearless,’ so I was like, ‘Wow, the second one is already coming so fast,’ and I was super excited, and I hadn’t even gotten the chance to fully enjoy the original ‘Fearless’ before the re-recording came out.”

Freshman Sapphire Yang, who was introduced to Taylor Swift through the original “Fearless” album like Bharadwaj, remembers being surprised that “Fearless (Taylor’s Version)” was the first album being re-recorded, as it isn’t her debut album. Although she acknowledges the new version’s differences from the original, Yang says she still enjoys the new album.

“I don’t know why, but I expected it to be the same but there’s something that’s so different about it that I just like, besides her voice and her changing some lyrics,” Yang said. “I think maybe the [“From the Vault”] songs changed it a little more.”

Unlike Yang and Bharadwaj, Rao did not know about the “From the Vault” songs before their release, so he didn’t expect much when first listening to them. However, he ended up really enjoying the “From the Vault” tracks, particularly “Mr. Perfectly Fine” and “Bye Bye Baby.”

“It was really cool to see a different spin on the songs that I already loved,” Rao said. “It was also a little bit weird, I will say that, but weird in a good way. You’re so used to hearing a song that you’ve been playing on repeat for days and days and it’s just, it’s weird to hear it in a different light sometimes. I think that’s why it kind of struck me a little surprised, but it was definitely great regardless.”

On “Fearless (Taylor’s Version),” Swift changed some lyrics and instrumentals, and Rao says he couldn’t recognize “You Belong With Me (Taylor’s Version)” when first listening to it because it’s “completely different from the original.” Bharadwaj was also surprised by Swift’s matured voice and the new instrumentals, but says the improvement from Swift’s original album to the new one is clear.

“Since I listened to the old ‘Fearless’ album so many times, I could tell which words were changed when compared to the new one,” Bharadwaj said. “And I think her high notes on the old songs weren’t that well-executed, but then on the new version, you can tell that she’s improved so much.”

In terms of Swift’s dispute with Braun, Yang says Braun shouldn’t gain any profit from Swift’s albums nor should he receive any credit for her songs.

“I think all artists deserve to own their own work that they write in their bedrooms when they were teenagers, not owned by some man that had no credit in any of her work,” Yang said. “That man who owns her music did not have any part of writing those albums and so therefore he should not have any right to own them.”

Rao also believes that Swift made the correct decision when she chose to re-record her albums, and acknowledges how the new versions can not only help her, but also impact her fans.

“I think it’s a great decision because I think she is very empowered in the sense that she wants to have her own control over her music and she wants to be able to be proud of what she has and she should have the ability to say that she owns the music,” Rao said. “And I think when you put in so much work into something like that you should be able to call it your own. And I think it’s great that she’s re-recording it, because one, it gives the fans something new to look forward to and also she gets that satisfaction out of being able to call it her own.”

Background Music: “The Lounge” by Bensound