A day of dancing

Indian classical dancers discuss the preparation and execution of their arangetrams 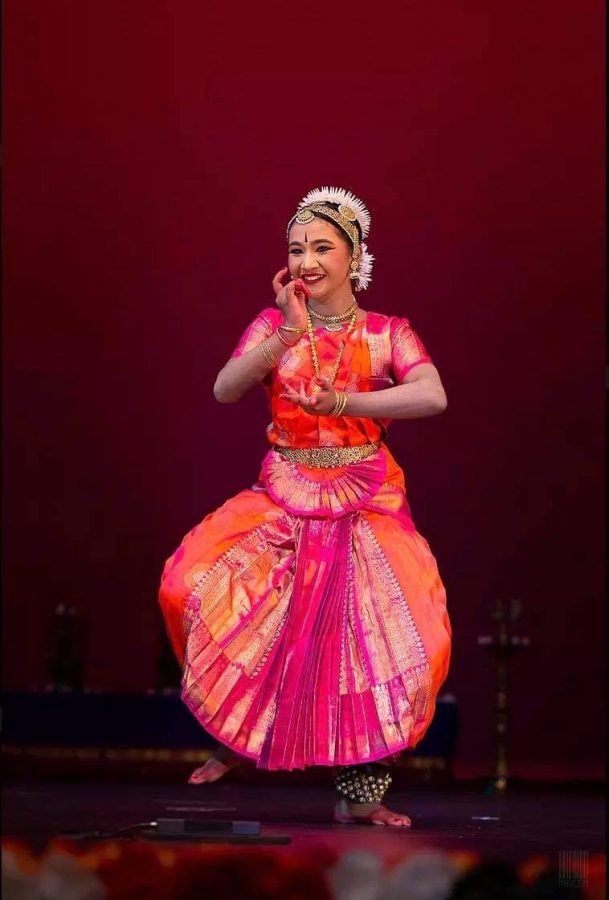 Gauri Manoj · A day of dancing

After walking off the McAfee Theater stage at Saratoga High School at the end of her arangetram, senior Harshitha Pandian was met with the smiling faces of her friends and family as her parents entered the stage to deliver the traditional closing speech. She remembers the feeling of community radiating backstage as she realized that all of her hard work had finally paid off.

An arangetram is the solo debut of an Indian classical dancer and translates to “ascending the stage” in the Indian language Tamil. Practicing the classical dance of bharatanatyam since she was eight years old, Pandian began training for her arangetram in 2016 and completed her performance on July 7, 2017. For Pandian, an arangetram signified the beginning of her independence, allowing her to perform on her own for the first time and to showcase the dances she had worked on for years. According to Pandian, the performance usually lasts about three hours, so she emphasizes the importance of practicing the pieces early to ensure that the choreography is memorized.

“When you go on stage and do it, if you do the wrong thing, nobody’s going to know but yourself,” Pandian said. “For me it was important that I understood the meaning behind each line, so even if I go on stage and I mess up something, I’m still able to go on with it and say the correct [story], even If I don’t do the exact steps I was taught.”

MVHS alumna Ananya Rajagopal, ‘20, who began learning bharatanatyam when she was seven years old, explains that while dancers train for their arangetrams for a long period of time, it is not traditionally considered to be a final performance or graduation.

“I know that one really important thing is that an arangetram isn’t supposed to be ‘end-all-be-all,’” Rajagopal said. “It’s not supposed to be the end of your dancing career — it’s supposed to be the start because you go out there and you perform for two hours on your own. It’s a huge production, it’s not just a recital. You have food for everyone, there’s hundreds of people coming, you have live music which isn’t always there when you perform at other places, and that’s a whole other thing that takes getting used to. You and your teacher worked together for so long for this. It’s the culmination of a lot of hard work, grace and effort, and you’re smiling through it all.”

Rajagopal had originally prepared for her arangetram to occur in July 2020 and six months prior to her performance date, she began taking more private lessons, scouting auditoriums and hiring live musicians. However, in the spring of 2020, as the pandemic progressed and stricter rules were enforced to prevent the spread of COVID-19, Rajagopal decided to postpone her performance, which she shares was “difficult for [her] to come to terms with.”

“In late April or early May, I was like, ‘Ananya, you have to accept the fact that your arangetram is not happening,’ and I was definitely sad about it,” Rajagopal said. “I worked as a [Door]Dasher over the summer and I remember I would drive past the Mountain View Theater, which was where my arangetram was supposed to happen, and I would just feel really sad. I was like, ‘There it is, that’s where it was supposed to happen.’ I think I just learned to deal with it, also because there’s so many other things going on during a pandemic and I still have a lot, and I’m lucky.”

Similar to Rajagopal’s intensive preparation, Pandian explains that the most stressful period of time was the two weeks leading up to the day of her performance, which she calls the “secondary week.” Since arangetrams typically incorporate live musicians rather than pre-recorded tracks, Pandian spent the two weeks in the auditorium coordinating her dances with the musicians’ music. Pandian shares that the overexertion, combined with her lack of food and water from stress, led to many difficulties during the secondary week, including fainting the Tuesday before her performance and suffering from her ongoing knee problems.

“[In] my weekend, there was a girl who did [her arangetram] on Saturday and I did my arangetram on Sunday,” Pandian said. “Both of us had a really bad day at musician practice and we were crying like, ‘What did we do?’” Pandian said. “‘It could have gone so much better.’ Our parents were like, there was a park next to the place we were practicing at, [and my parents] were like, ‘Go on that swing, and you’re going to swing there for 20 minutes until the both of you guys are happy,’ so we just swung and that gave us so much happiness. We were like, ‘Oh my god, we’re fine now,’ so just finding those small pockets of happiness throughout was really great for me. It really helped me because if it was just completely like, ‘You need to work, work, work, work, work,’ then I don’t think I would have been able to do it. I think I needed those small moments where I was like, ‘Hey I can relax. I can go to the park for ten minutes and have fun with my friend and then come back.’”

Sophomore Anusha Sainarayanan, who has been practicing bharatanatyam since she was four years old, shares that while the total cost depends on the dancer and their family, she has attended other performances that have ranged up to $100,000. With the expensive cost in mind, her parents are leaning towards having a smaller performance, yet Sainarayanan still hopes to host a more grand one before she graduates high school.

“I’ve never really had a day to myself,” Sainarayanan said. “If I’m not going to have a graduation party, if I’m not going to have a sweet 16 [party], then I might as well go all out. Obviously, I don’t want my parents to go bankrupt, but I think it’s fair if you’ve been working that hard … Doing an arangetram, you’re having to go to classes not once a week but four or five times a week. The week that you do it, you’re going to be living at the stage. So I want to do it big, but I don’t think my parents really want me to do that.”

Despite the expenses and some challenges during practices, such as major changes in choreography the week before her performance, Pandian reflects on the pride and relief she felt after finishing her last piece. During an important day of her life, she appreciated the comfort of having her family and friends supporting her in the front two rows, which she explains were the only rows she could visibly see from the stage.

“People have put so much time and effort into this — it’s not only me,” Pandian said. “My parents have put so much time driving me back and forth, staying up to help me practice, my teacher has put in so much time, everyone here has put in so much time. What if I go on stage and mess everything up? It was the fear that I’m going to make people feel disappointed in me. To overcome that was like, ‘Hey, it’s OK, whatever happens, happens there. You put your all into it.’ You can never predict what’s going to actually happen. You make sure you prepare yourself how much ever you can before, so you go out there and you [do] your best. I remember specifically, that was the one thing I had to let go of, and be like, ‘It’s OK. Go there, [if] you mess it up, who’s gonna know? You’re going to know and that’s it. You’re the only one who’s going to know that you messed up on stage.’”

Now, as more people are receiving their vaccinations and the number of COVID-19 cases in Santa Clara County is decreasing, Rajagopal is looking forward to hosting her arangetram soon. For her, 2020 was a year filled with uncertainty, yet she’s thankful that she’ll still be able to finish an important event in her dancing career, and she’s motivated by the idea that there is “always a light at the end of the tunnel.” As she is currently attending the University of Illinois Urbana-Champaign, she notices that she doesn’t have as much time to practice her pieces, but bharatanatyam still remains an outlet for her to relax and express herself through art.

“I think it’s important for everyone to explore their roots and their heritage,” Rajagopal said. “Something that’s so beautiful, and that goes for any sort of dance or music or art. I think it’s really cool that [bharatanatyam] goes back so far. I think it’s really cool that there’s so many ways to express your emotions. I think everyone should be able to try out some form of dance, theater, art or whatever it may be, just because I know especially at MVHS, which is a very STEM[-based] school, I think people don’t give enough credit to how [many] students there also pursue the arts. Because they do, and it’s a very nice release from the quantitative day-to-day stuff that we do all the time.”