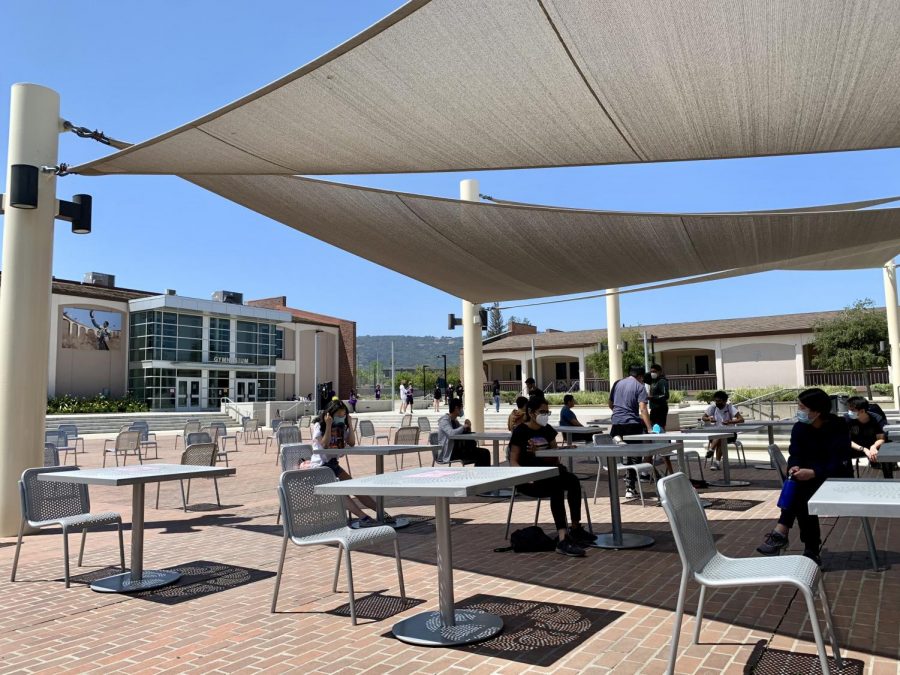 Juniors taking the CAASPP take a lunch break after their first math testing session on May 12. Photo by Sophia Chen

During two consecutive Wednesdays — May 5 and May 12 —  Assistant Principal Janice Chen cites that approximately 60 MVHS juniors returned to campus after their Advisory period to take the California Assessment of Student Progress and Performance (CAASPP) test. The first Wednesday covered the ELA portion and the second Wednesday covered the math portion. Students were given a lunch break part way through testing, where they were provided free lunches. FUHSD Coordinator of Data & Assessment Denae Nurnberg, who oversees all standardized testing within the district, says the CAASPP was scheduled for Wednesdays so that it wouldn’t impact instructional time or conflict with AP testing.

This year, students had the choice to opt in to take the CAASPP test, as the typical 95% participation accountability requirements were waived for this year. In FUHSD, 14.72% of juniors took the CAASPP test. Chen, who was in charge of overseeing CAASPP testing at MVHS, says she was surprised by the number of students that opted into taking the test.

“I didn’t think there would be a lot of students that would be interested in taking it if it was optional,” Chen said. “I just estimated 20, maybe because their parent probably was making them take it.”

Junior Renee Ou says she thought that taking the CAASPP test would allow her to “feel accomplished” and that she “did something productive on [her] Wednesdays.”

According to Nurnberg, planning for the CAASPP test began early January, but plans kept shifting as the district continued to receive updates regarding state requirements. The district also expected that the incoming Biden administration could potentially change state CAASPP testing requirements.

Nurnberg said that the test was initially scheduled for mid-March, but then “things started to pop up in terms of the state thinking about testing a little bit differently.” CAASPP testing was then scheduled for the week before spring break, but that was canceled as well.

“And so I think it was the Friday before spring break, that I was able to actually meet with the CAASPP coordinators and say, ‘Here’s what we’re doing, and we’ll meet after the break and figure out logistics,’” Nurnberg said. “But it was a really tight turnaround to be able to get out the letter to 11th grade families … and [then] get those student lists back out to the site so that they can make plans for proctors and facilities and all that stuff.”

While the California Department of Education (CDE) and Educational Testing Service (ETS) recommended in-person testing, remote testing was also an option. Nurnberg tested the idea of downloading the secure testing browser onto personal laptops with a class from Cupertino High School, but was met with limited success. Chen says another potential idea was to distribute school Chromebooks with the testing browser to each junior and have them take the test while being on Zoom on their personal computers in order to receive instructions.

Overall, both Nurnberg and Chen thought that CAASPP testing went smoothly, despite some challenges caused by the FUHSD WiFi issue during the first testing session on May 5, which prevented in-person learning on Tuesday, May 4 and Thursday, May 6. However, Nurnberg said that the tech team was able to move all the testing Chromebooks to a separate WiFi system, resolving the issue.

Despite the lower number of students that took the CAASPP this year, Nurnberg thinks there will be minimal impact on data collection, as the data from CAASPP testing isn’t used instructionally but rather gives the district an overview of the overall performance of students. The data is also used for the Early Assessment Program, the State Seal for Biliteracy and the Golden State Merit Diploma, though Nurnberg anticipates that many of these programs will waive their CAASPP requirement. She also predicts that this year will not impact future testing and that “students should expect to be tested in a regular kind of cycle next year.”

Chen acknowledges the challenges that came with planning for CAASPP testing as a result of the pandemic and thanks everyone involved for adapting to said changes.

“I think that’s been how this whole school year has [been] — there’s a lot of unknowns, and that’s really hard to plan for, which leaves, a lot of times, schools having to scramble last minute to get things done once we know what we need to do,” Chen said. “But I would say that it’s really helpful to have people chip in [and] help out. And just understanding that it is a really different year. And I really appreciate families, students [and] staff who are just super flexible and just understanding that we’re doing the best we can with the information that we [have] … and hopefully, next year we can be back in person everybody, and things will go back to normal.”