Online petitions, albeit performative, should not be classified as purely apathetic 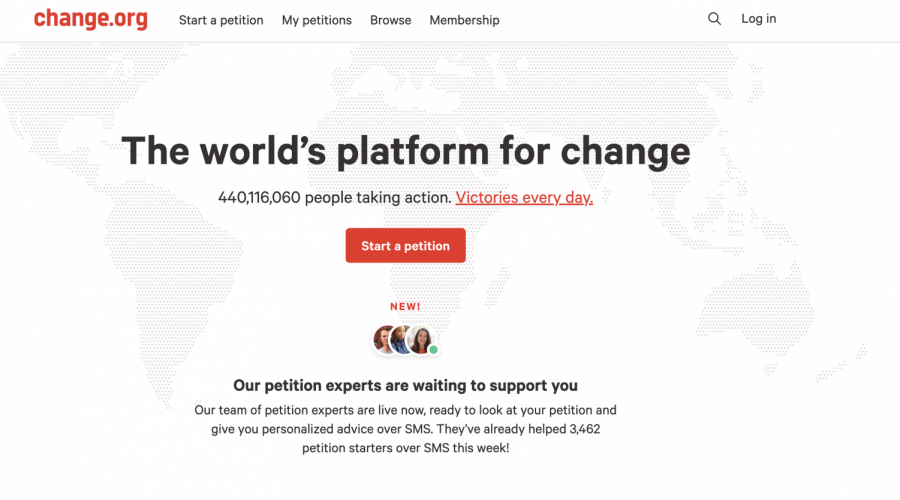 Change.org is a platform that allows users to create online petitions and request leaders to make change

In March of 2020, a couple days before school shut down and a pandemic transformed the world into an indefinite state of desuetude, a www.change.org petition began circulating in my AP Physics I group chat. The petition called upon the Fremont Union School District Administration to close schools in what appeared to be a thinly veiled attempt at an officially issued early spring break. As soon as the link popped up on my screen, encased in a grey Messenger bubble, I rolled my eyes — and it appeared that I was not alone. Seconds after the message was sent, 15 angry bubbles followed, echoing my skepticism.

But in spite of myself, I clicked the link and signed, because even though I was nearly certain that the petition would likely have no effect, I could not pass up the opportunity to perhaps, possibly contribute to this microcosm of a movement. Of course, only days later, the irony of those incredulous messages (and, dare I say, the efficacy of the petition) was illustrated to us when school did indeed close indefinitely, far surpassing the duration of the spring break we’d initially expected.

A few months later, in the wake of the resurgence of the Black Lives Matter movement, change.org petitions began to pepper my Instagram feed in droves — a phenomenon I observed across multiple social media platforms in the months following. From TikTok stars that raised awareness about the police brutality in Nigeria to colorful graphics that urged users to get educated about the Rohingya crisis in Myanmar, it seemed to me that those petitions and posts were the apathetic activist’s best friend — a way to assuage guilt about remaining disengaged while still continuing to remain disengaged.

But perhaps, the saliency of the change.org petition exists for a reason. To understand why a change.org petition might work, we first need to examine the goals of protests and petitions in general. Let’s take the BLM cry heard around the world, “Defund the police!” Contrary to what certain politicians suggest, the movement does not aim to abolish the police, rather, it aims to reallocate the enormous amounts of money spent on the police by municipal and state governments into other parts of the public sector, such as healthcare or education.

According to Columbia Business School Professor Dan Wang, successful protests such as BLM are able to “articulate a united and focused vision” that is ubiquitous among the movement and has clear calls to action by the federal government or any other institution. By articulating this goal in protests, conversations with lawmakers and political campaigns, activists are able to create an environment in which it is politically dangerous for individuals in power to not make change — and from there, change is born.

How does this translate into the efficacy of change.org petitions? They’re methods of voicing public opinion, which, when coupled with the vast array of other actions taken by activists, can indeed help further a movement.

They are also, quite often, a means by which people alleviate guilt about being disengaged with a particular cause. In spite of that, signing those petitions is far from an internecine affair. According to The New York Times, people who sign those petitions as their only course of action are usually those who would otherwise choose not to get involved with a movement at all. By signing the petition, they have not only engaged with the issue, they have also been added to an email list that will continue to alert them of social, political and economic movements occurring both locally and internationally on the platform. Furthermore, while signing that petition itself may not result in the immediate formation of a social justice warrior, individuals who do sign online petitions are more likely to research the issue, donate to non-profit organizations that support that cause and increase their engagement with the issue overall, according to Rosemary Clark-Parsons, the associate director of the University of Pennsylvania’s Center on Digital Culture and Society.

These petitions create a single platform with a clearly articulated goal and an identifiable actor of change while remaining accessible to an incredibly vast audience. A change.org petition called “Justice for George Floyd” that was addressed to the Minnesota Attorney General garnered over 19 million signatures in an attempt to hold Derek Chauvin accountable for the murder of Floyd. While it is difficult to measure the impact of such a petition, especially when the ultimate verdict was determined by a court of law, it is equally difficult to state that the signatures of 19 million individuals from around the world had no impact whatsoever.

My interest in these petitions was not, however, piqued by domestic activism, but rather the aforementioned desire to “raise awareness” about appalling human rights violations abroad. In countries that exist under an authoritarian regime, such as Saudi Arabia, or Myanmar, where the government was recently overthrown by a military coupe, it remains difficult to imagine that change will be invoked by an online petition.

In fact, that assertion is also not completely accurate. There are three main avenues by which international advocacy for human rights operates: first, through non-governmental organizations (NGOs) such as Amnesty International and UNICEF, second, through aid via the United Nations and finally, by way of the U.S. foreign policy, although there have been debates on the efficacy of all three. NGOs, when funded by governments, can serve more to exercise that government’s foreign policy than humanitarian aid. The U.N. has repeatedly been ineffective at creating any kind of measurable change and U.N. peacekeepers have gone as far as to exacerbate those violations. Economic sanctions, the U.S. foreign policy of choice for condemning international human rights violations, have raised speculation that they can have the unintended consequence of causing more harm than good.

In spite of these apparently bleak prospects, international advocacy — and positive change — continues to to prosper. Amnesty International recently freed a mother and son, Marilin and Yunior, after a year contained in a detention facility in the U.S., and the U.N. is making progress towards a stable, peaceful national government in Libya. And of course, there remains the preservation of human rights through U.S. foreign policy, which is where change.org petitions come in. Those petitions can occasionally prove to be one helpful action among the many taken by activists to hold politicians accountable for exercising U.S. soft power to enforce compliance with international law abroad.https://www.unicef.org/

Fostering international change can be immensely challenging. Fatigue and a disconnect from those issues can prove to be large obstacles when participating in international advocacy. However, even for those without the money to donate to organizations that are transparent about the ways in which they allocate their funds — such as UNICEF and Amnesty International — can engage in advocacy that extends beyond signing a petition. That includes joining one of the aforementioned organizations and volunteering with them, writing letters to lawmakers in organized groups about human rights violations and even doing research and consuming brands with a sense of awareness, such as not shopping for clothing from corporations that mistreat their outsourced labor forces.

Advocacy is difficult — change can only truly be fostered by individuals who are passionate enough about making a difference to overcome challenges and make a statement about an issue. And the agent of change that pushes our world to an ever more equitable tomorrow will hardly be an online petition. Yet, dismissing the online petition ignores the ways in which those petitions do in fact increase the accessibility of activism. Because ultimately, the inalienable right we have to express an opinion about a certain issue in whatever way we so choose is one of the great miracles of our democracy, whether that’s on change.org or not.