Derek Chauvin found guilty for the murder of George Floyd 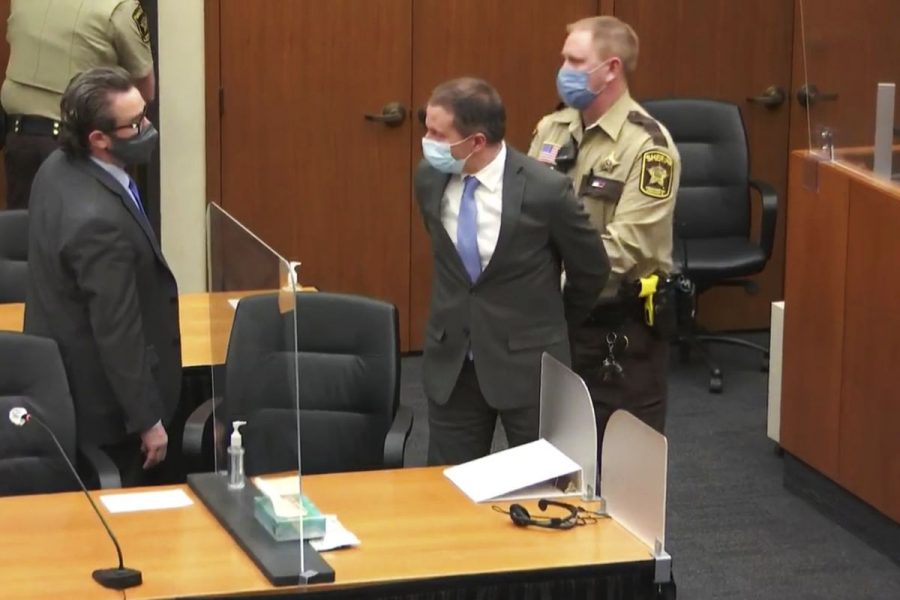 Former police officer from Minneapolis, Derek Chauvin, is escorted from the trial hall where he was found guilty for the murder of George Floyd

This case began after Chauvin was recorded with his knee on Floyd’s neck, holding Floyd down for nine minutes and 29 seconds on May 25, 2020. The video was made public on YouTube, followed by a wave of backlash regarding police brutality against people of color, especially those who are Black. Several protests were seen using the “#BlackLivesMatter”  and it was one of the biggest strides for the Black Lives Matter movement.

Chauvin pleaded not guilty to all charges against him and the case that followed has been broadcasted online in order to follow COVID-19 restrictions, while also letting the public witness the legal process.

A jury consisting of five men and seven women found him guilty on all charges, after discussing their decision for more than four hours on Monday, April 19, as well as some time before the verdict on Tuesday, for a total of 10.5 hours.

“It’s great that [Chauvin] is finally charged for everything that happened last year,” junior Ritvi Ranka said. “The only thing is that it’s surprising how long it took and how long the trial went. But at the end of the day it’s great to hear that he’s finally found guilty.”

Judge Peter A. Cavill read out their decisions at around 2:15 p.m., remanding Chauvin into immediate custody and stating that his sentence will come out in a few weeks.

Chauvin’s defense attorney Eric Nelson claimed that Chauvin did not use inappropriate force on Floyd and that his decision was affected by a multitude of bystanders who incidentally also recorded the event.  Using evidence from post mortem scans of Floyd, Nelson also argued that Floyd died not of Chauvin’s force but rather because of the dosage of drugs found in his system.

Video from said bystanders showed Chauvin kneeling on Floyd as he struggled to breathe,  even calling out, “I can’t breathe” more than 20 times.

Prosecuting attorney Steve Schleicher mentioned this video in his closing statements: “This case is exactly what you thought when you saw it first, when you saw that video,” Schleicher said. “It is exactly that. You can believe your eyes. This wasn’t policing. This was murder.”