Examining the internalized misogyny behind using “bitch” to denote empowerment 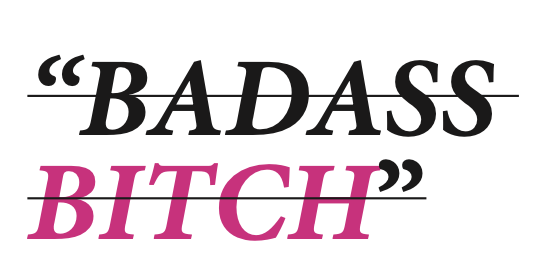 Examining the internalized misogyny behind using “bitch” to denote empowerment

This quote by Laurel Thatcher Ulrich has materialized as stickers on laptops, posters on walls and on who knows how many Pinterest boards. Most interpret it at its surface level, declaring that women need to stop being well-behaved in order to make history.

And this sentiment often emerges through phrases like “own your inner bitch” or “be that boss bitch.” Essentially, the term “bitch” — previously and often presently used as a derogatory term towards women — has been reclaimed by some feminists and marketed as an empowering term. But why are we reclaiming it in the first place?

The etymology of “bitch” reveals that the term means “female dog” in Old English. Its origins date back to 1400 A.D., when it first started being used “as a term of contempt applied to women,” and subsequently appeared in writing to describe a “a lewd, promiscuous woman … a prostitute.” In 1975, author Muriel Schultz explained that rhetoric pertaining to women often follow this trajectory — beginning as a term with innocent or neutral connotations and eventually evolving into a derogatory, pejorative sexual slur (wow, patriarchy!).

But in 1970, feminist author Jo Freeman kickstarted a movement to redefine “bitch” to mean “empowered” after writing the essay “Bitch Manifesto.” In subsequent years, several notable figures have followed suit in changing the connotation, with celebrities like Tina Fey and congresswoman Alexandria Ocasio-Cortez claiming “bitches get stuff done” and Madonna proudly identifying as an “unapologetic bitch.”

Obviously, though, “bitch” is not used in an exclusively empowering context. A person will say a woman they don’t like is “such a bitch,” and the next day, that same person will admire their friend’s confidence and call her a “badass bitch.” This relentless tug-of-war between insult and empowerment is inherently problematic — it is representative of our own internalized misogyny. Our rhetoric has become muddled; by calling women who appear either evil or empowered “bitches,” we are conflating confidence and assertiveness with hatred and hostility.

It’s time to fix our rhetoric.

I am not shy about my accomplishments.

And why should I be? I’ve done my part; I’ve failed, I’ve succeeded and I’ve worked hard to get to where I am. So when I am good at something, I want people to know it and give me my due respect.

But — and I suspect this happens to me often, simply because I don’t have the luxury of being a man — I am often called “bitchy” or “toxic” when I own my achievements. And now, since I have come to expect these labels, I try to beat everyone to the punch — when I say I’m good at something, I follow up with: “I know I’m toxic” or “I know I’m a bitch.”

Society has normalized women hating themselves, so much so that I have internalized that a powerful woman is also a bitchy one.

So next time a Pinterest board tells me to “own my inner bitch,” I’ll ignore it. There is no bitch to own.

Stop being a bitch frequently runs through my mind (self-criticism is unfortunately one of my fortes).

I have a somewhat incessant need to be perceived as a “good person” (what does this even mean?) — someone who is kind, intelligent and actively works to better society. And whenever I deviate from these goals, my mind instantly jumps to bitch. Stop being a bitch.

I’ve internalized that the worst possible thing to be is a bitch, that whenever I make a mistake or think a negative thought, I’m the word that the patriarchy uses to reduce women to lesser beings.

But maybe I should rethink my internal rhetoric. Maybe the next time I mess up, I won’t tell myself to stop being a bitch. I’ll tell myself to learn and to do better.

Isn’t that all we can do?

Trying to morph the word “bitch” to have an empowering connotation is a quest we should have abandoned a long time ago. When it comes down to it, by labeling women who are smart, strong and confident as “badass bitches,” we are associating positive characteristics with an inherently negative word, revealing layers of internalized misogyny. A woman who is confident is not a “badass bitch,” she’s confident. A woman who is not confident shouldn’t be told to “own her inner bitch,” she should be encouraged to recognize and celebrate her worth.

We shouldn’t feel the need to “reclaim” the word “bitch.” Often, hateful rhetoric is reclaimed for the purposes of diminishing the language’s impact and subsequently decreasing its harm. And while this has been true (to an extent) in cases like some members of the Black community choosing to use the N-word or the LGBTQ+ community adopting the word queer, there are simply better ways to describe women than using the term “bitches,” even if it’s the “empowered version.”

Ulrich’s quote — Well-behaved women seldom make history — is actually often misinterpreted. Ulrich wasn’t advocating for women to stop being “well-behaved,” she was criticizing how society neglects the history made by women who largely served in domestic roles, as if domesticity should not be respected, as if domesticity is not a compelling enough topic to discuss as a facet of femininity.

Not only should we stop renaming confident and ambitious women as “bitches,” but we should also be highlighting the accomplishments and contributions of all women, regardless of what they choose to do.

Because actually, well-behaved women do make history — but they are seldom recognized for it.