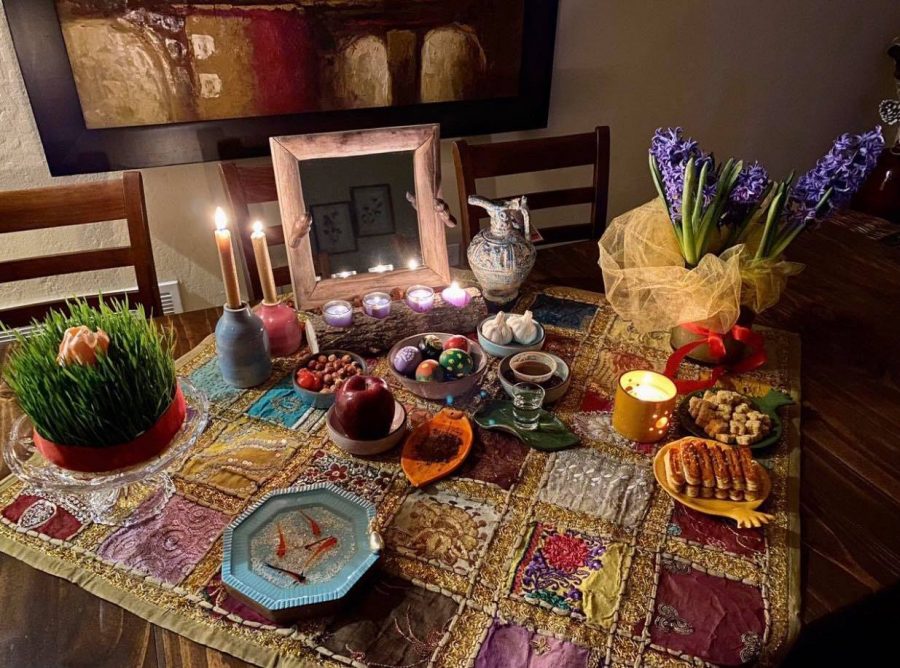 For the second time, the Persian New Year Nowruz occurred on March 20 during the COVID-19 pandemic, restricting the extent to which families could celebrate. Prior to the pandemic, typical Nowruz celebrations included large groups of families and friends celebrating through several back to back events throughout March. This year, however, local Iranians found alternative ways to carry out the holiday’s traditions.

For Sophomore Liana Khorasani, March is her favorite time of the year due to the various Persian celebrations relating to the new year. She says that since it is the biggest Persian holiday, her family “celebrates it in the most extravagant way” and that she has “the most positive memories” associated with Nowruz since it’s the one time of year when all of her family and friends come together.

Chaharshanbe Suri, which translates to “Scarlet Wednesday,” is the first celebration in March and takes place on the eve of the last Wednesday before Nowruz. Families and friends gather for a fire-jumping festival, which is meant to burn away all the negativity prior to the new year.

“[Chaharshanbe Suri] is definitely the most fun and amusing festival as a kid,” Khorasani said. “We would have these huge parties with our family and friends and we basically [all jump] over fire. When you tell your foreign friends ‘Yeah, I’m gonna go jump over fire tonight,’ [they’re] always like ‘Oh my God I want to do that too’ so it’s [also] a really good opportunity for other people to learn about our culture while they’re doing something fun.”

This year, however, what Khorasani describes as usually a “a huge and elaborate party” ceased to exist. In fact, junior Arvin Ebrahimzadehkoochesfahani says that he spent the evening at home doing homework.

“I [was still able] to FaceTime my relatives in Iran and wish them [a happy Chaharshanbe Suri], but it’s sad to not be [able to see] my relatives in America either,” Ebrahimzadehkoochesfahani said. “I wouldn’t say it’s less meaningful because you still get to be with your [immediate] family, but it’s definitely less fun because there are less people to celebrate with.”

Following Chaharshanbe Suri is Nowruz, which is on the first day of spring. Senior Paniz Arefi describes the time leading up to Nowruz to be joyous and filled with lots of love as families tend to “change [their] mindset” by doing spring cleaning around the house and “clear[ing] all the negative thoughts in [their] minds.”

An important tradition of Nowruz is setting up a Haftseen, which translates to “Seven S’s.” This entails creating a spread on a table with at least seven items that start with the letter “s” in Persian. Each item has a special significance and Arefi remarks that Persians take lots of pride in the design and creativity of their Haftseens.

This year, Khorasani, Ebrahimzadehkoochesfahani and Arefi all set up their Haftseen’s, and Khorasani says that creating it is a tradition that “is never going to change,” no matter the circumstances.

Before moving to the U.S., Arefi shares that she had fond memories of Haftseen preparation in Iran and claims that Nowruz in the U.S. is much different from Nowruz in Iran, even without the pandemic.

“One or two weeks before Nowruz, there is a very exciting vibe in [the entire] country,” Arefi said. “If you go out to the streets, you [see] people selling fish and sabzeh [which are wheat or lentil sprouts] and it’s super crowded. The one thing that I really love about Nowruz is going out and buying things in the streets because everyone is truly happy — you see smiles on everyone’s faces and the entire country is so cheerful.”

In an attempt to capture the festive feeling that Nowruz brings Arefi and her family, Arefi planned a Zoom call with her relatives in Iran this year so that everyone could enter the new year surrounded by their loved ones. Virtually counting down to the new year with all her family, she felt a “beautiful connection” and says it was a memorable experience for everybody.

For the next 13 days after Nowruz, Iranians take the time to visit family and friends. Commonly, elder relatives and friends gift “eidi’s” to younger children, which is typically cash.

The last day of celebration is known as Sizdeh Bedar, which translates to “Out with the Thirteenth,” hence the celebration being on the 13th day after Nowruz. Because the number 13 is considered unlucky, Iranians gather with friends and family to picnic outdoors, since staying indoors is considered bad luck.

When he previously lived in Iran, Ebrahimzadehkoochesfahani states that his family hosted Sizdeh Bedar at their home for the past five years and around 300 people would come. He says that everyone would bring food to share with others and that he “loved seeing all of [his] friends and family in one place at one time.”

In the Bay Area, before the pandemic, hundreds of Persians would congregate at Vasona Park in Los Gatos to celebrate Sizdeh Bedar. Food kiosks would flood the park as families played various games such as Backgammon (a board game from the Middle East tracing back at least 5,000 years), cards and soccer.

Khorasani notes that she would always meet new people since everyone was welcoming of others joining their picnic, even if they didn’t know each other.

Although unable to gather with large groups of people anymore, Arefi and her immediate family members are still planning to go picnicking on Sizdeh Bedar at a small local park, believing that the significance of the day lies with the people she’s spending time with, not the quantity of people.

While Khorasani agrees with Arefi, she expresses both sadness and anger about the inability to celebrate Nowruz as notably as past years.

“I [get bothered sometimes] because I’ll open TikTok and see some people [having] huge gatherings,” Khorasani said. “[Nowruz] is something so important and the one thing we really celebrate [in America] as Iranian-Americans, so knowing that doesn’t exist this year because some people couldn’t be responsible enough makes me angry.”

Nonetheless, Khorasani and Arefi are hopeful that in the following years, health guidelines will gradually allow for the comeback of large Nowruz parties.

“Even though it’s very sad, it’s beautiful to see how even in these hard situations, we can still find ways to connect with each other,” Arefi said. “I’m seeing it in a positive way and hope that we can actually see each other next year.”