On the tennis court 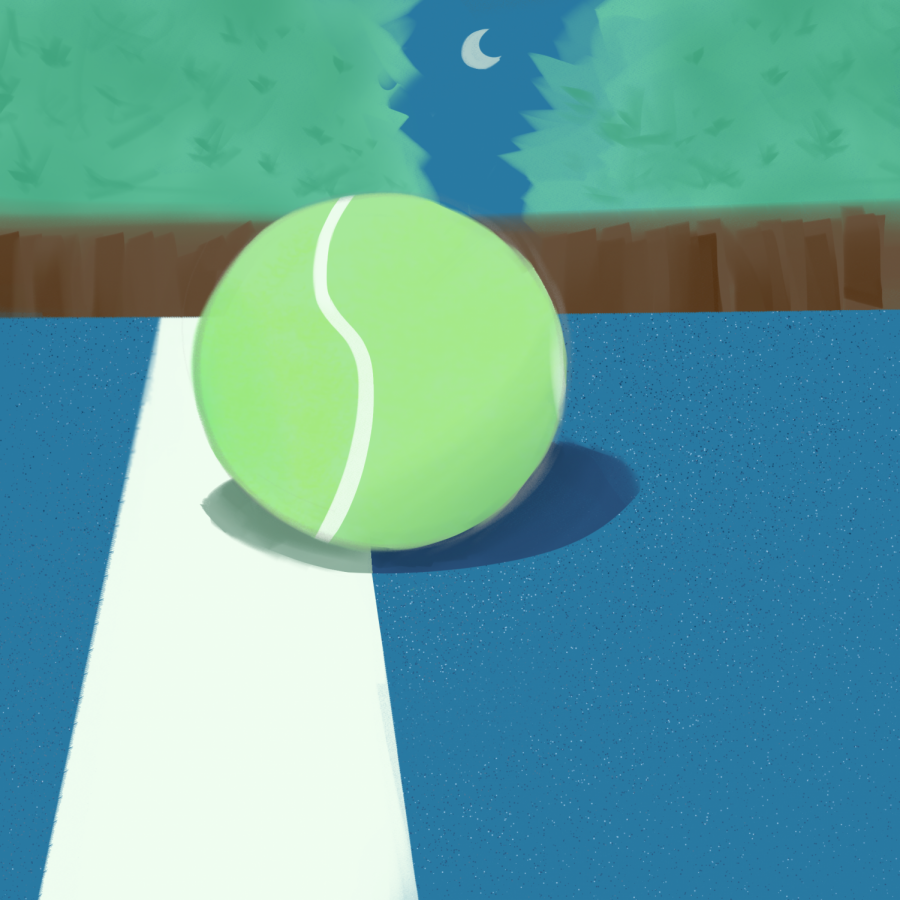 An illustration of a stray tennis ball on a tennis court

The resounding thud of ball against racket, the squeak of chunky shoes on asphalt and the metallic scent of sweat under the sun are familiar yet ambivalent sensations to me. I can’t pinpoint the exact moment I discovered the world of tennis, but somewhere along the way, I fell in love with the sport.

As I immersed myself in tennis, I experienced many firsts accompanied by vivid emotions. My first rally ― the awe that enveloped me when we reached 10 consecutive shots. My first serve ― the feeling of satisfaction when I angled my body, tossing the ball to allow for the perfect moment of contact. My first set ― the surge of pride when I delivered the final blow and my opponent raced after the ball only to find it out of reach. Each day I played, I experienced something new and my passion for tennis only grew.

Yet after I entered high school, my once unconditional love for tennis began to waver.

One Monday afternoon at the end of summer, I stepped foot onto MVHS for the first time, gripping my new racket with sweaty hands. Girls filed onto the court, and once a decent crowd gathered, the coach gave an introductory speech and instructed us to begin warming up.

Despite the casual conversations and friendly atmosphere, everyone couldn’t help but notice the coach standing on the sidelines, surveying our performance with hawk-like eyes. That’s when it first sunk in. High school tennis would add a factor I’d never experienced in my few years of playing ― competition.

The first game of the season came as a shock ― two sets blurred by and suddenly, it was match point. My opponent aimed their shot right on the line and won the rally, leaving me disappointed. I had never felt so overpowered.

This trend continued for the next few months, and with each devastating loss, the ecstasy of playing tennis diminished. I fixated on my mistakes — Was I not working hard enough? Each time I gripped my racket, I no longer felt excitement ― rather, my usual joy had been replaced with unshakable terror and dread.

As much as I hated to admit it, relief washed over me when my first season drew to a close. When sophomore year rolled around, I found myself facing a whole new set of issues — ones rooted in my seniority. Since I was assigned to play singles at the beginning of the season, it was inevitable that other players would challenge me to move up to better positions. 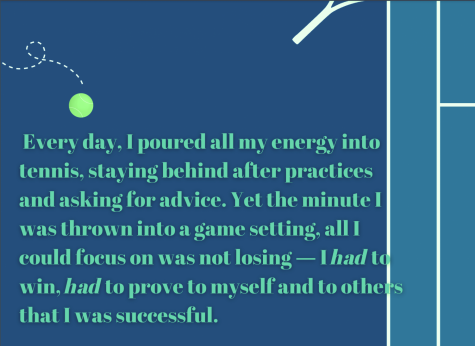 The first challenge match I played was jarringly reminiscent of my first game freshman year. In addition to the fear of losing the position I’d earned, my seniority raised the stakes ― I couldn’t lose to someone younger than me. Fears of the match’s outcome gnawed at me and led to my eventual loss.

Recognizing the detrimental mindset I was slipping into, I became determined to improve and win consistently. Every day, I poured all my energy into tennis, staying behind after practices and asking for advice. Yet the minute I was thrown into a game setting, all I could focus on was not losing ― I had to win, had to prove to myself and to others that I was successful.

My inability to win, which I had associated with lack of improvement, manifested itself as aggression. Each time I picked up a ball, I dug my nails hard enough to puncture it; each time I ran into a shot, I swung with all the force I could muster; each time I missed a shot, I became overwhelmed by the urge to throw myself onto the ground.

A few months into quarantine, I was perusing through Netflix for something to watch when I decided on “Haikyuu!!” What initially seemed like a light-hearted Anime about volleyball resonated with me, mainly because of the character Oikawa Tōru.

At first, Oikawa appears to be a flippant, superficial person without much skill. However, when we see him play for the first time, his skill becomes evident — he is able to analyze situations, determine the best move and bring out the strengths of his teammates. Despite Oikawa’s talent, he is deeply insecure about his abilities.

He consistently loses against the same team — called Shiratorizawa — throughout middle school, and therefore sets his sights on improving at volleyball until he can accomplish this victory. However, this eventually leads to rather self-destructive behavior, and due to excessive practice, Oikawa permanently damages his knee. Eventually, his high school volleyball career comes to an end and despite all the matches he did win, he is never able to accomplish his dream of beating Shiratorizawa.

While I related greatly to Oikawa, it wasn’t until months later that his story’s message sunk in. One day, while having a friendly rally with my father, I made the perfect shot. The recoil as the ball collided with the sweet spot, the shifting of weight onto my front foot and the angle of my elbow as I followed through with the swing brought back a rush of sensations ― ones that were familiar and satisfying. Without the factor of success versus failure, I was able to remember what made tennis important to me in the first place.

Living in a society where we equate tangible accomplishments to success, it is easy to fall into the dangerous mindset that without victory, our efforts are meaningless. We don’t need to capitalize off of everything we do ― it’s OK to participate in activities simply because they’re fun.

The story of Oikawa Tōru serves as a reminder for me, and many others, that sometimes we should stop caring so much about our successes and instead, focus on the aspects that really matter. The next time I’m on the tennis court, whether it be for fun with my family or for the school team, I’ll concentrate on enjoying tennis for what it is rather than simply winning.