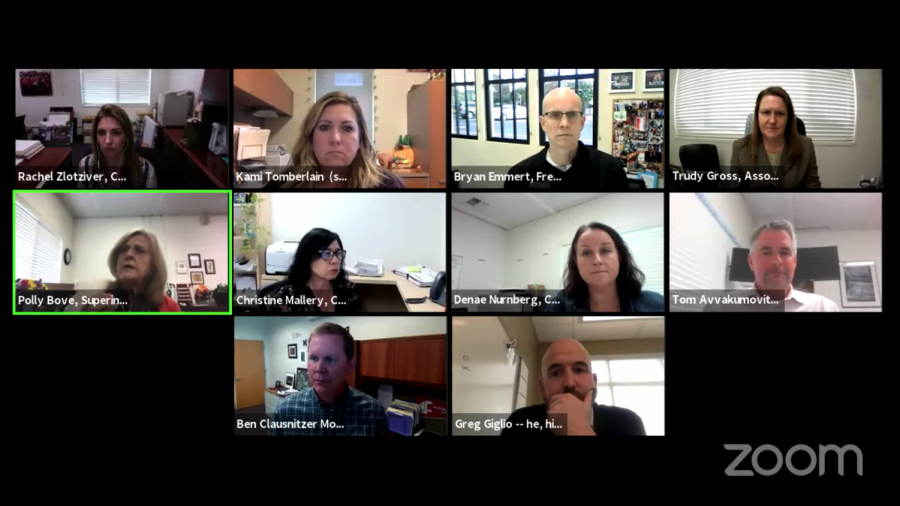 On March 8, FUHSD hosted a Parent & Community webinar to provide updates about a potential return to in-person school during the 2020-21 school year, in light of recent events at the district, county, state and national levels.

A Distance Learning and COVID-19 Resources webpage is available on the district website, and is constantly being updated with new information. 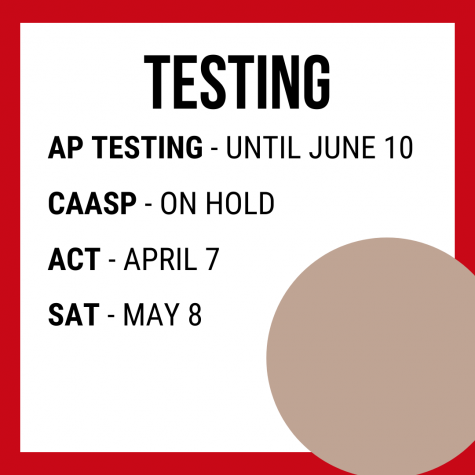 Because the Biden administration has offered flexibility and delays for state standardized testing, FUHSD has decided to put the CAASPP/Smarter Balance testing for juniors and seniors, originally scheduled for April 5-9, on hold. In terms of other testing updates, an AP testing schedule was sent out on Feb. 22 (the district is working on technical accessibility plans since all testing will occur digitally with the exception of AP Music Theory and language AP exams) and an ACT and SAT will be administered on April 7 and May 8, respectively.

CA Governor Gavin Newsom announced recently that if counties in the Red Tier, like Santa Clara County as of March 3, open “elementary grades and at least one middle or high school grade” by April 1, they will receive $2 billion in grants and will incrementally receive less money if they reopen later. The grants are for the costs associated with safely reopening schools.

Currently, a survey about a potential hybrid instructional model has been sent out for parents to complete before March 11. In the near future, FUHSD Superintendent Polly Bove says there will most likely be another formal Parent Commitment survey where parents would choose to commit to sending their children back or continue in distance learning. To address concerns from both parents and teachers, Bove says that in the case of a return to school, the content for students learning virtually and students learning in person would be the same, but requests that the community be understanding of any potential disparities.

“[We] can’t promise that there’s going to be the same kind of concentrated effort that there’s been on Zoom,” Bove said. “We are going to do our best to balance the demands of teachers trying to do something that’s very challenging, which is to deal with the students in front of them and the students who are at home.”

Bove explains that as of now, “one of the things that we’re seeing so far in our survey is that there’s a pretty even split between people who want to come back to school and people who do not, and our goal is to be serving both groups of individuals.”

The district’s early February announcement stated that distance learning would be in place until at least April 9, with the exception of small cohorts of students that have been going to campus for academic support since the start of second semester. Bove says these cohorts have been working well and “they’re seeing students back on track.”

Homestead High School Principal Greg Giglio says that as of now, there are students on campus due to academic support pods, athletics, band and other clubs requesting in-person meetings, and there are new regulations in place pertaining to singing outdoors. Fremont High School Principal Bryan Emmeret adds that they are looking to bring current freshmen on campus and are planning to reach out to current Link Crew leaders who may be willing to lead orientation activities. MVHS Principal Ben Clausnitzer, as well as Lynbrook and Cupertino High School’s principals, echoed Giglio and Emmeret’s statements, and Clausnitzer also says that they’re considering re-orientation for current MVHS sophomores, since they were on campus for a short amount of time before school closed.

California counties are assigned tiers based on test positivity, adjusted case rate and health equity metric, and schools may reopen if they have been in the Red Tier for 14 days. Since Santa Clara County is in the Red Tier, schools may reopen with a six-foot distancing requirement, meaning classrooms would be at half capacity. Teachers — most likely the same teacher as distance learning — would be present in classrooms. Recent events and conversations have led to negotiations between the district and the Fremont Education Association (FEA). Additionally, the limitation of two-cohorts per student changed from required to recommended on March 3, meaning that students would be able to attend different periods in different classrooms throughout the day.

Avvakumovitz explains that the Santa Clara Valley Athletic League (SCVAL), which consists of 14 schools in total including the 5 FUHSD high schools, have adopted a three season model due to easing restrictions, which “maximizes opportunities for students to play and compete.”

Because the district reached an agreement with the state on March 4 about resuming indoor sports, Avvakumovitz says that Boys and Girls Basketball and Wrestling may be possible additions to Season three sports, and also adds that despite the three season model, P.E. credit for students will still be offered in the same manner.

“I’d like to thank the coaches and athletic directors and other staff who have made this possible,” Avvakumovitz said. “Many of them contributed many hours when competition wasn’t allowed [because] we were allowed to do some training, some coaching and without the dedication of our coaches we wouldn’t be having this conversation.”

In terms of staff vaccinations, a recent survey was sent out with responses from approximately 50% of FUHSD employees. Around 82% of respondents have had one vaccine dose, 4% have had both doses and 9% have scheduled a first dose appointment. Zlotziver has communicated with the Santa Clara County Office of Education (SCCOE) and Santa Clara County Public Health Department (SCCPHD) to secure vaccine availability for teachers living within and outside of the county.

“Getting vaccinated gives us a sense of relief and real protection,” Bove said. “The things that still need to be done are we must wear masks, we need to keep the distance and we also need to be mindful of the airflow in our classrooms. We have been working over a year, not only through our modernization process, but in other ways to ensure we have quality ventilation systems that process the air thoroughly so there’s enough circulation of oxygen and outside air in the classrooms to feel that we can safely have students indoors.” 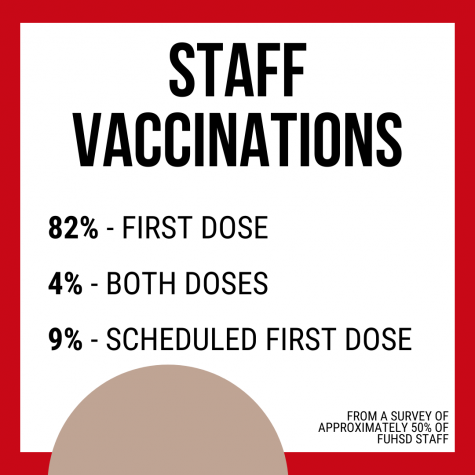 The facilities department is also working to implement MERV 13 filters in all the systems to ensure that every classroom can accommodate students safely.

During distance learning, all five FUHSD schools have been under construction to accelerate bond projects, which Bove says has saved money and will reduce disruptions when in-person instruction begins. Despite ongoing construction, there remains an adequate number of classrooms — Bove says they will work to minimize sharing rooms — if students come back this school year.

Gross explains that the district has collaborated with the company Qualtrics to launch a health screening tool that all staff members are required to fill out daily, whether on campus or remote. It includes questions about COVID-19 symptoms and staff are given a green check if they are eligible to be on campus and a red x if they need to stay home. Additionally, there is human-to-human contract tracing in place — if someone has been in close proximity to an individual with COVID-19, has symptoms or has tested positive, they report it to a COVID designee (one individual on each high school campus). The MVHS COVID designee is Janice Chen, and she looks through the timeline and ensures that the individual receives and follows the self-isolation quarantine guidelines, as well as analyzes any contact that person may have had with others.

Regarding sanitary and protective equipment, Mallery explains that community members have donated disposable masks, Governor Newsom has sent the district personal protective equipment (PPE) and the district was able to eventually procure sufficient amounts of PPE and develop a system where these are stored in a warehouse. Also, the custodial staff has implemented all the new guidance pertaining to cleaning and sanitization, such as cleaning bathrooms three times each day.

Gross also emphasizes the mental health supports in place, including the Mental Health & Wellness Check-In form, Student Wellness & Resources webpages on each school website, as well as email support from teachers. Additionally, the district has a partnership with Care Solace, which operates 24/7. Gross cites that over 500 people have searched for resources on the site, and there have been over 50 cases of people working with a Care concierge. Gross says that to access these resources, students or staff may reach out to School Linked Services Specialist Jasmine Kroner or contact concierges directly from the website.

Additionally, last month, in partnership with El Camino Health, FUHSD hosted a parent webinar focused on suicide prevention. They are hosting another parent webinar on March 8 about using validating language when addressing their teenagers and working with them towards mutual goals. 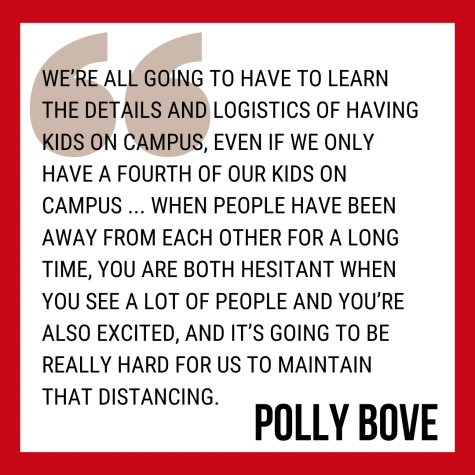 As far as planning for the remainder of the school year, Gross says the district has been actively discussing graduation since December. Gross has been working closely with the County Office of Education and County Public Health to confirm the size of gatherings, which has been increasing as the County advances tiers.

“There’s anywhere between 200 and 400, but our goal is to have a safe, in-person graduation ceremony,” Gross said. “We continue to work on what those details look like, and we are hoping that the directives and tiers continue to move in a positive direction … the number is an ‘all in’ number, meaning that we have to think about how many students, family members and staff can be part of the ceremony.”

In terms of immediate next steps, Bove says that by the end of the week, the district will be sending out invitations to form a Return to School Committee for this year to handle further research and decision-making.

“We’re all going to have to learn the details and logistics of having kids on campus, even if we only have a fourth of our kids on campus — how do we handle passing periods? How do we handle lunch? How do we handle brunch?” Bove said. “When people have been away from each other for a long time, you are both hesitant when you see a lot of people and you’re also excited, and it’s going to be really hard for us to maintain that distancing.”

“I feel very confident that our students understand and are committed to wearing masks … our whole goal here is to make [reopening] safe and to commit to as much of a comprehensive high school as we can for those kids that are ready to come back and then to work with our staff to do something that seems almost impossible, which is the combination of working with a few kids in the classroom and the kids at home and try to balance that.”