Off the market: How Robinhood’s mission to democratize trading highlights a bigger problem of financial illiteracy 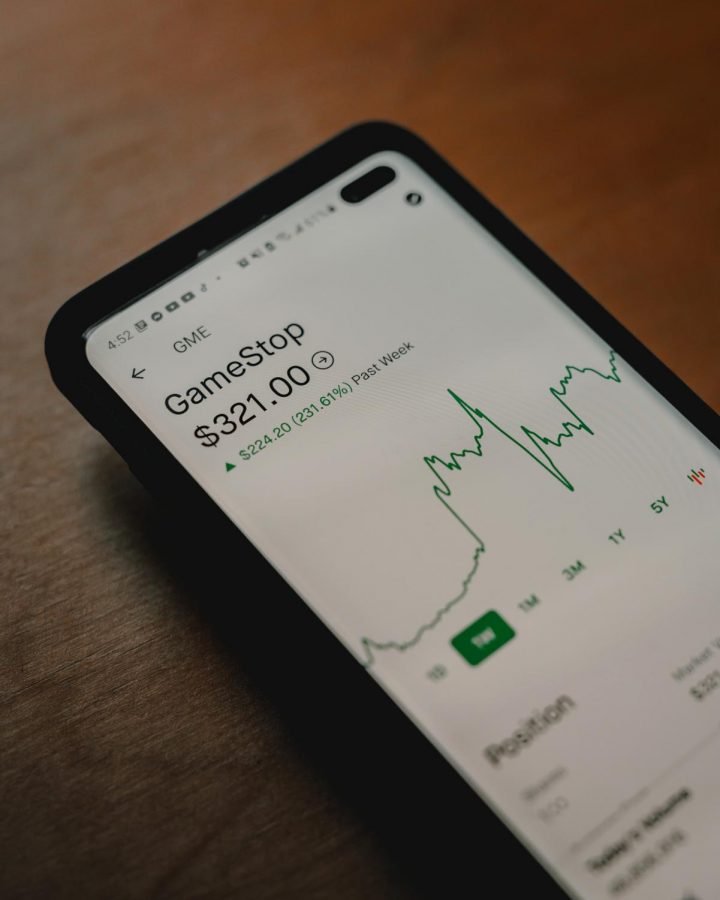 Late in January of 2021, news of the “GameStop incident” dominated headlines as people across the country witnessed a group of retail traders — individuals who buy and trade stocks for personal accounts — on the Reddit group WallStreetBets push the price of GameStop stock to increase by as much as 14,300% at one point, causing large hedge funds that had been been betting on a fall in GameStop’s stock price to lose billions. These retail traders were driven by their desire to upend the powerful Wall Street firms that had been shorting the GME stock, or essentially betting that the stock price would fall and attempting to make money on the difference. Large hedge funds such as Melvin Capital lost 53% of its investments and received a $2.75 billion emergency transfusion from Citadel LLC, a peer hedge fund.

This trading frenzy was in part enabled, and then disabled, by Menlo Park based financial services company Robinhood. Robinhood was founded in 2015 by Stanford University alumni Vladimir Tenev and Baiju Bhat to increase the access of the everyday trader to financial markets. Robinhood quickly gained traction for its commission-free trades, a commodity that is only recently being used by investing firms, according to Eamon Fry, an associate financial consultant at the Cupertino branch of Charles Schwab, another financial services corporation.

“When you look back [at] the 70s and 80s, you would have $100 commission fees for trades,” Fry said. “[There were] really exorbitant fees that our industry would have, but that’s been reduced a lot. Those barriers [to investing] have really been broken down because one of those hot button issues would be commissioned fees, or just the cost of investing.”

Perhaps as a result of Cupertino being an amalgamation of the risky investment ideologies of venture capital firms in neighboring Palo Alto and having resident families with relatively high median incomes, many MVHS students are involved with investing in and trading stocks. Junior Anant Somani, who started trading in eighth grade, explains how Robinhood made trading more accessible to his fellow, less experienced student traders. Somani’s platform of choice is TD Ameritrade, which he says offers a more complex range of trading services despite being more “clunky” than Robinhood.

“Robinhood is extremely convenient and the user experience is incredibly fun, but when you know what to do, it’s useless, it’s completely useless,” Somani said. “A lot of [my friends] use Robinhood to trade options, which is one form of stock investment, and I got started with options using Robinhood too — it’s a good way to start. But again, once you realize what other applications can actually do, and what they can get you compared to Robinhood, Robinhood is completely useless — it’s just a fun experience.”

Somani and his friends’ experiences touch on Robinhood’s driving philosophy — to democratize trading. The stock market is overwhelmingly controlled by a very small group of people — approximately 85% of stock is held by the wealthiest 10%, according to a Survey of Consumer Finances by the Federal Reserve Board. Increasing wealth gaps are one of the major barriers of entry into the stock market, and Robinhood, living up to its namesake, uses its commission-free trading platform to ease the grip that massive Wall Street hedge funds have over the stock market because “not participating in the markets ultimately contributed to the sort of the massive inequalities that we’re seeing in society,” Tenev said in an interview with The New York Times.

However, making trading so readily accessible also comes with drawbacks. Twenty-year-old college student Alex Kearns committed suicide on June 12, 2020 after a Robinhood software malfunction that caused him to believe that he had a negative balance of $730,000. Just a month later, San Diego resident and inexperienced trader Richard Dobatase lost $860,000 on the app.

Fry believes that the benefits of democratizing trading are tremendous and outweigh the drawbacks, but emphasizes the importance of getting educated about the stock market before investing. He often refers inexperienced clients to Schwab’s MoneyWise, an online collection of resources aimed at increasing financial literacy, before providing financial services to them. This sentiment is echoed by AP Economics teacher Scott Victorine, who believes a lack of knowledge about the stock market is one of the biggest barriers faced by potential traders.

“I’ve been a big advocate for personal finance in high schools for a long time,” Victorine said. “It’s not part of our curriculum, it’s not required, but it blows my mind that we don’t teach it. I’ve seen memes about how students [will say] ‘I spent all this time on A, B and C in high school but I don’t know how to do my taxes].’ I think that it’s a real shame that we don’t [teach personal finance].”

Victorine also taught AVID for the class of 2020, and explains how when he conducted a seven week personal finance unit covering topics including filing taxes, budgeting and managing student loans, he was met with an overwhelmingly positive response.

in a single semester causes the curriculum to be less extensive than he would like.

“The fact that [financial literacy] is not taught in schools is a real disservice to students,” Victorine said. “Even if we just spent six weeks on personal finance and budgeting, learning about that would be so critical. I’ve had students come back and tell me that too, like, ‘I wish I had learned how to do this in high school.’ I’m happy to teach it, and I tried to work it in [from] time to time, but there wasn’t a set curriculum for that.”

However, the lack of school curriculum on personal finance need not prevent students from getting involved in trading, Somani, Fry and Victorine explain. Somani cites a wealth of online resources, from Khan Academy to Investopedia, which provide digestible material to form a solid foundation of knowledge before getting started. Somani explains that even though Robinhood can provide a deceptively simple user experience that can sometimes cause individuals to forget that they are dealing with vast sums of money, ultimately, it is up to a trader to understand the extent of their financial risks, a sentiment that Victorine and Fry also share.

“The bare minimum [of knowledge] that I would steer towards is being knowledgeable about the risks associated with any kind of investment style, which is something you can work with a professional on,” Fry said. “At [Schwab], one of our core principles is making sure you’re familiar as well with the big picture — what your goal is for investing and what your strategy is and it’s pretty ambiguous. Identifying what your needs are for any kind of funds you’re wanting to invest [and] what it is that you’re investing for is hugely important.”

“the actor Ashton Kutcher, who has invested in Robinhood, attended one of the company’s weekly staff meetings on Zoom and celebrated its success by comparing it to gambling websites.” https://t.co/sRlvGPxXkU

Victorine compares investing in the stock market to a form of “legalized gambling,” a sentiment echoed across diverse groups of traders, from actors like Ashton Kutcher to opinion columnists who claim “the house always wins.” After the recent GameStop incident and the subsequent volatility in the stock market, both Fry and Victorine foresee hedge funds and individual traders alike being more cautious in their trading.

To get accustomed to the risks of the market, Somani recommends that inexperienced traders use a stock simulator app to gain experience with the highs and lows of the market without the risk of losing real money. Ultimately, however, Somani, Fry and Victorine all believe that getting involved with the market from a young age lends itself to an immense amount of positive learning experiences.

“I don’t think it’s ever too young to get involved, especially if you have the means to do so,” Victorine said. “I only caution about making sure you have the know-how and that you’re educated about your decisions, because there’s obviously a risk associated with [trading]. You know, go in small, try it out, get familiar with it — it’s never too early to learn about it as long as [you are] responsible. And I think that that’s the balance with the stock market — if you’ve got some extra money to spend, it doesn’t hurt to try it out and learn how it works.”