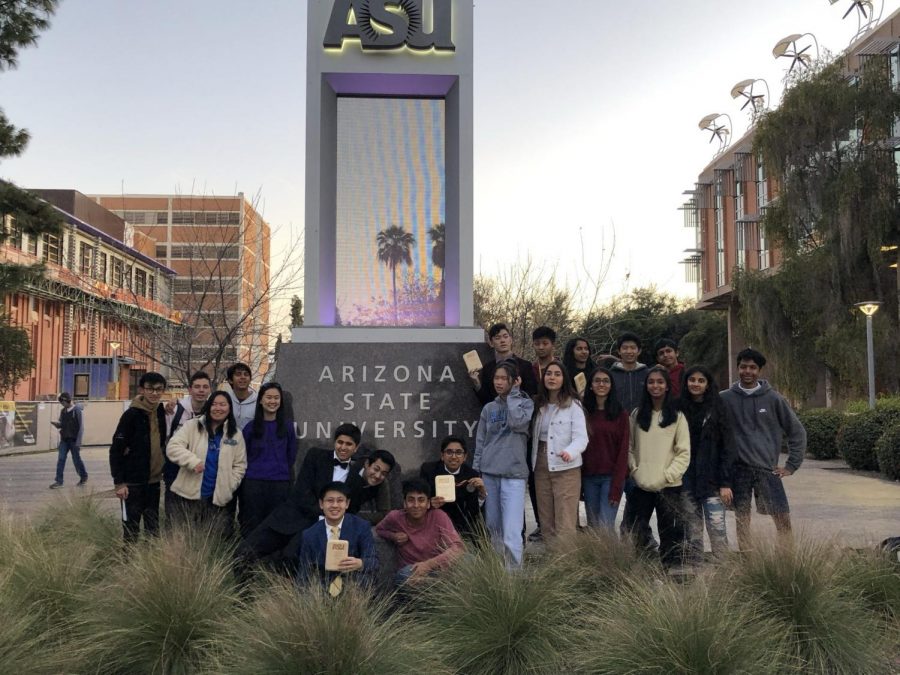 The Speech and Debate team celebrates their accomplishments at an Arizona tournament.

Distance learning may have decreased instructional time, but academic club interest has not diminished. For many competition-based clubs, officers have worked to both maintain communities formed during in-person school and forge new connections — in fact, membership has increased in some clubs where distance learning helped expand activities.

Senior Eric Lee, the co-president of Speech and Debate, says that virtual recruitment this year was more challenging logistically because the club could not hold its usual in-person events like their information sessions in the MVHS auditorium. Nevertheless, the officers managed to attract more newcomers than usual through online promotions and an online training camp over the summer.

A post shared by Monta Vista Speech And Debate (@montavistasd)

“We acknowledge and are thankful for the fact that Speech and Debate can run relatively smoothly online without much modifications because we can perform our pieces [and] speak to the camera, whereas that might not be true for other clubs or extracurriculars,” Lee said. “And as a result of that, we’re happy to say that we’ve gotten an influx of new people who may not have had the time or wanted to try speech before, giving it a shot and [finding] out that they really liked it.”

The organizing committees of many academic competitions, from Speech and Debate to Science Olympiad, have shifted tournaments to digital platforms. Although the experience can be drastically different, Lee has observed silver linings for Speech members.

“It can be difficult for someone who’s deathly afraid of public speaking [to] stand up in front of a judge an audience in a suit, be all formal and deliver [their speech] as opposed to being at home, having that comfort and being able to practice in the night before,” Lee said. “The effect is different, not actually being in the room with your competitors … the kind of friendly learning aspect is still there because you’re more easily able to spectate around and see how other people deliver [their] speech, take the best parts of that and try to add that to your own style as well.”

One challenge Speech and Debate has faced in holding online tournaments and Zoom practices is maintaining the team spirit that binds members together. Junior Atmaja Patil, the Director of Operations for Speech and Debate, misses the team chants and other hallmarks of the team’s unique culture.

“If we were in person, we would do our hype circle before [each] tournament and it would just be a really fun chant and our advisor would be hyping us all up,” Patil said. “We also do that to intimidate the other teams. [In the most recent tournament], on the second day we couldn’t even meet anyone else from the other team; we just jumped straight into our rounds. So there isn’t really that community feel, whereas speech is, at least to me, all about community.”

Senior and FBLA Director of Projects Sathvika Gopalasetty agrees, adding that staying motivated as a new team member can be difficult without the unique interpersonal tournament experiences that are often as memorable as competing in their respective events.

“Right now, they’re doing all the work but they’re missing all the fun,” Gopalasetty said. “One of the best parts of FBLA is going to conferences and spending time with everyone in your hotel room, or going to socials and meeting people. It’s definitely less fun in that sense, but we have been trying to do the best we can.”

But the importance of team bonding extends beyond just one’s club experience. Junior Tarun Batchu, an officer for the Science Olympiad club, believes that meaningful interaction with one’s teammates is essential in staying grounded throughout long-term projects. In previous years, the club offered study sessions where members could study and bond with teammates outside of school. This year, however, the club found that few people would show up to Zoom study sessions; Batchu attributes this to the difficulties of meeting and getting to know people online.

“I’ve seen people who are very motivated to sign up, but at the same time I’ve seen people who are not as motivated, [who] did sign up and seem pretty motivated to start but after taking some tests, feel a little less motivated,” Batchu said. “I feel like people were motivated to study harder [in previous years] because you’re not just taking a test — you’re going to a test and you’re taking it with one of your friends. Now, you’re taking it with somebody you barely know [and] probably met once or twice.”

Clubs like FBLA and Speech and Debate have tried different strategies to increase long-term dedication, from synchronized calendars to icebreakers. In Science Olympiad, Batchu has noticed that communication, a current weakness of the club, is essential for keeping large teams motivated throughout the long months of preparations leading up to a competition.

“It’s not very easy to find just some [communication] platform online because it takes some time to adjust to it,” Batchu said. “And in that period, you’re going to miss out on some important things; not everybody’s going to be on that platform way too often … [Science Olympiad] has a very collaborative team, and if a couple people aren’t doing the job, the rest of the people are going to have to take the weight, and it puts a burden on them.”

Despite these challenges, running clubs virtually has had its share of positives. For example, Lee says that his team could attend more tournaments than usual without having to worry about the logistics surrounding travel.

“Last year in first semester, we had five tournaments, [but] this year we’ve doubled that to 10,” Lee said. “We’ve included places like the Yale Invitational, the Princeton classic, [and] a tournament in Florida. Because it’s online, we’ve broadened our scopes, and we are thankful for that.”

Some clubs, like FBLA, have also found it easier to plan internal activities virtually without having to worry about the logistics of renting venues or obtaining school approval. Gopalasetty adds that club members can receive more individual help over Zoom.

“We were able to have more workshops, but it was harder to give teams individual help throughout,” Gopalasetty said. “So during the startup competition, instead of just the instructor, we also recruited other people to act as mentors. When we put everyone in breakout rooms, we’d have a couple mentors in each room, so that way we could get individual help in terms of workshop content.”

Lee stresses that it is important to find a balance between yearning for the in-person experience and adapting to virtual activities.

“It’s probably not as exciting, as it’s [not] in-person — there’s something special about waking up before the sunrise, getting in your suit and getting hyped with your friends to get ready for the tournament,” Lee said. “But I think that we’ve been able to strike a pretty good balance of keeping the team spirit and engagement as much as possible while also adapting to online.”