Examining how students and teachers view competition at MVHS 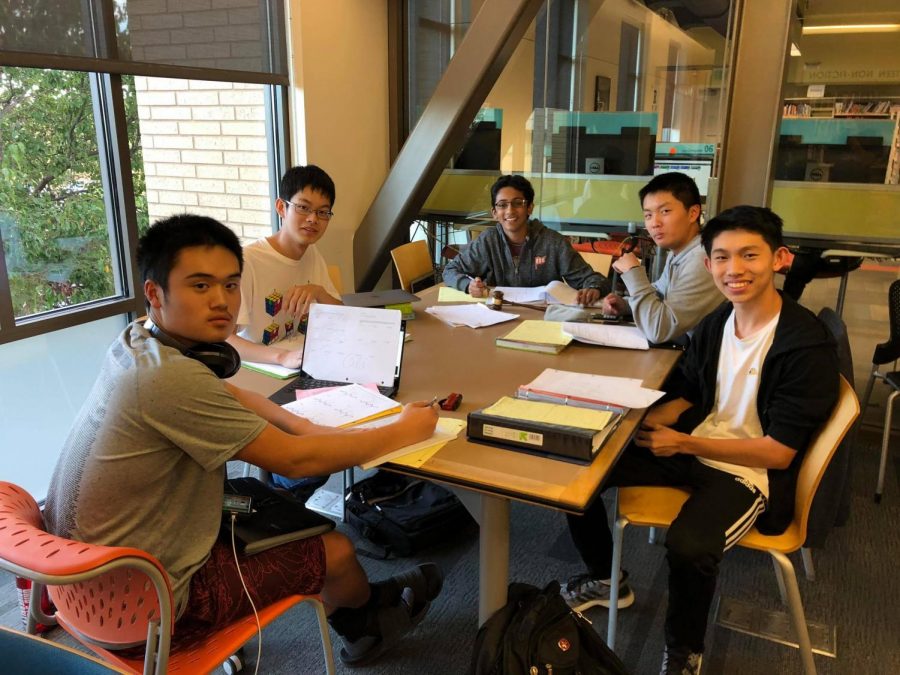 Senior Tae Kyu Kim studies with his friends for an upcoming AP Calculus BC test.

eing physically sick due to a concussion throughout the majority of 2019 and not being able to attend school, junior Prakriti Pragya remembers facing a difficult time returning to what she describes as the “competitive culture of MVHS.” As Pragya slowly reentered the school environment, she felt that she couldn’t compete at the same level as everyone else, which took a toll on her mental health. Students would often discuss receiving A’s in classes and 95% on tests in her classes and still complain it wasn’t enough, making Pragya feel ashamed for being behind.

According to Pragya, students at MVHS start and end the school year thinking about AP Tests, SAT, ACT, grades and extracurriculars, citing this as the cause of competition at school.

Pragya believes that often, students compare themselves to one another instead of focusing on personal growth and achievement.

“I think competition turns out to be trying to be whatever standard of academia [there is], in [MV this would be] the grading system, medals, certificates and entering in prestigious programs where you try to one-up, or compete with your fellow peers to make sure that you have more credentials than other people,” Pragya said. “You can definitely see it with AP tests where we try to take AP tests even if we’re not taking the class and even if you’re not interested in the class at all. We exhaust ourselves being the club president of seven different things, have 10 different extracurriculars, [and] go to competitions for everything.”

Due to this overbooking of activities, Pragya has seen many peers burn out or get extremely emotionally involved in small situations such as a math test. Pragya points out that this is an example of unhealthy competition where many students push themselves above and beyond their personal capabilities.

“Unhealthy competition is [when] you abuse your body, you abuse your peers [or] people on your team,” Pragya said. “You overwork yourself or others and make it too personal, [which can] affect your mental health. I have definitely struggled with my own like self-conscious, where I feel like I am worthless, or stupid because I don’t do what other people do and I can’t do what other people do. I’ve seen that in a lot of friends, where people who have won many competitions and medals and all this stuff still call themselves stupid, still feel like they’re never going to measure up to what they want to be because the competition at Monta Vista is hyped up too much. It’s unrealistic — it’s not a real picture of what [reality] should be.”

However, senior Tae Kyu Kim admits that competition can sometimes be fun if conducted in a healthy manner. Kim has found that the best way to compete in academics or other activities are with friends, as this allows a peaceful competition and mutual support.

“I think a healthy competition is in a way that benefits [everyone] mutually when they’re all trying to just help each other and they can just learn from each other,” Kim said. “I like to have a friendly rivalry. If you look up people’s [profile] online you’re probably gonna find the good parts of them there. [They] are going to be talking about much they work or what they have achieved, but when you’re actually working with people who you know and actually collaborating with them, [you are] able to see their flaws and their frustrations as well. You can just feel a little bit good about yourself, knowing that you’re not the only one who’s having difficulties.”

AP Physics and AP Chemistry teacher Julie Choi agrees with Kim and thinks competition can benefit students in many ways and be enjoyable if conducted correctly.

“I do have class competitions for icebreakers, and I think kids enjoy it,” Choi said. “I think it is a way to tap into people’s motivations and drive. I think it’s just a matter of how the competition is translated to the students. I think competition can be fun and sometimes the fun gets taken out. Anytime you go to a teacher meeting, and you say ‘Monta Vista is a competitive environment’ everyone’s like, ‘You got to decrease it,’ but the reason we have [competition] is because [the students are] so driven. I think a part of it is competition makes you feel like you’re part of something, it feels like you are a part of something together.”

Choi believes teachers and administration can also drive competition at Monta Vista along with students being competitive individually.  Choi claims that it is important for teachers to be flexible and establish learning objectives they want students to meet and master instead of remaining adamant on keeping the class average percentage the same.

When students don’t feel like they are in an open environment, Choi believes this can harm students’ mental health. Similarly, Kim adds that it is easy for one’s mental health to suffer due to overthinking; this repercussion would be an example of unhealthy competition.

“Even if I had the support group [with] who I could have this healthy competition, inevitably, I would compare myself to people who’ve had years of experience ahead of me,” Kim said. “There have been some times where the competition can become so stressful to the point where it’s difficult to deal with all the standards [and] expectations that I created for myself or from society. But over the years I’ve come to have a more healthy relationship with competition overall and realized that I need to give myself a break.”

Pragya suggests that when in a difficult situation where one feels overworked, the only way to get over an unhealthy relationship with the competition is to recognize personal boundaries and limits. 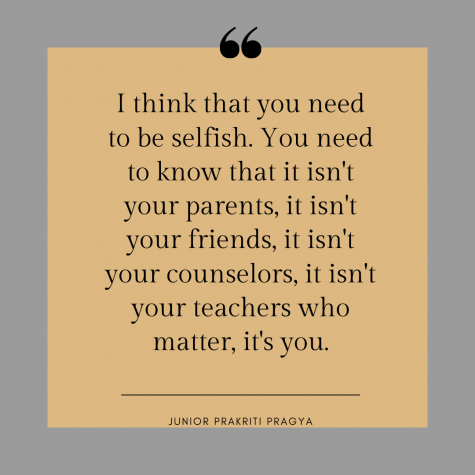 “I think that you need to be selfish,” Pragya said. “You need to know that it isn’t your parents, it isn’t your friends, it isn’t your counselors, it isn’t your teachers who matter, it’s you. So you need to be selfish and take time for yourself and say ‘no, I don’t think I can do this homework today, can I have an extension?’ Ask your parents, ‘I don’t want to do some chores today, can I do more chores on Saturday?’ Take some time for yourself and create boundaries for yourself so that you know that what you’re doing is within your abilities. Competition is good, but it has to be done within perspective. You have to compete knowing that this isn’t your entire life, and that your entire life does not hinge on this moment and whether you win or lose. It matters more about what you do with that.”