What to expect from Biden's first hundred days as President 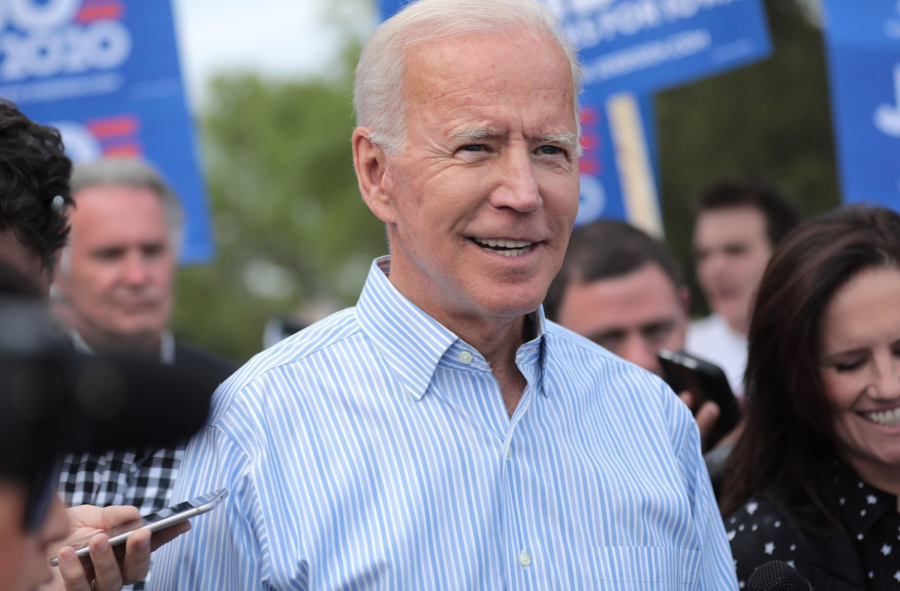 Biden speaks with attendees at an event in Iowa in 2020, || Licensed under CC

oday on Jan. 20, 2021, President Joe Biden addressed a crowd of less than a thousand people for his inauguration, considerably smaller due to restrictions related to the COVID-19 pandemic. Former President Donald Trump was notably absent, whose alleged attempts to spread misinformation about the election only further divided the country, evident through the Capitol insurrection on Jan. 6. The current state of the country and impact of the pandemic only further highlight the national conflict between America’s two most prominent political parties, the Democrats and the Republicans.

Biden will start his presidency in one of the worst recessions since the Great Depression. The pandemic has already taken over 400,000 lives in America, and as lives continue to be lost, the events of the insurrection have brought about divided feelings among American citizens.

AP Economics and World Core teacher Scott Victorine believes that Biden and his administration will push much more strongly against the pandemic and economic situations than the Trump administration did. With President Trump having focused more on claims of voter fraud and challenging the election, Victorine believes that Biden will attempt to push America out of its current inaction.

“I think that [the Biden administration is] going to have to be aggressive in how they tackle [various issues in the U.S. currently], whether it’s the pandemic or the economy,” Victorine said. “[On the topic of] social justice, and especially with all the unrest in the division, [Biden] campaigned on the idea of being a healer and bringing the country together.”

With the political party shift from Republican to Democrat, U.S. History teacher Robbie Hoffman believes that an integral part of understanding how to unite the country is through finding a way to surpass the differences between both parties and bridge the gap between them. In the current environment, he finds that it is past time that the division between the two parties is let go.

“[Both parties] have to find something that they can agree upon, something that’s going to work for everybody, and I think a lot of these solutions are going to take a long time,” Hoffman said. “It’s not going to happen within the first 100 days … it may not even happen within Joe Biden’s presidency for however long he’s president. But I think that what’s happened in the world today, especially in our country over the past week, and even in the past year has really shown that there is a great division and divide — not just within the American people, but also in our government as well.”

Senior Nelson Mu also believes that Biden will attempt to bring the country together by first creating a bipartisan political environment. While Biden has many priorities that include catering to his moderate voter base and maintaining order within the Democratic Party by listening to Progressive aims, Mu believes that he will mainly attempt to foster the development of a much more negotiable Republican Party.

“He’s probably going to try to use [his presidential] power as much as possible,” Mu said. “We’ve also seen that he’s called for bipartisanship … [what] we need now more than ever is a Republican party that’s sensible, right? He’s always kind of been this guy that’s a very centrist Democrat, only because he needed a party to join.”

Hoffman highlights that Joe Biden must resolve conflict between Republicans and Democrats if he desires an united plan to effectively and efficiently combat the COVID-19 pandemic. Hoffman also points out that Biden’s decisions about COVID vaccines will be integral in identifying when MVHS administration, teachers and students will be able to return to campus.

“[The Republicans and Democrats] have to definitely come to some kind of common ground, maybe compromise somewhere, for the sake of getting things like COVID vaccinations out,” Hoffman said. “Joe Biden, as president, is going to have to really work with both sides — not only the Republicans or the Democrats, but both of them together to figure out a common solution to these major issues that the United States is facing.”

Biden will also face one of the slimmest majorities in decades. Democrats have a nine-seat advantage in the House, and Vice President Kamala Harris must act as tiebreaker in the 50-50 tied Senate. According to Victorine, the slim majority will require Biden to work with the opposing political party to pass a lot of his key legislation, though Victorine also explains that the Biden administration will need to aggressively push for Democratic policy.

“There’s going to be certain things that they’ll be able to push,” Victorine said. “Of course there’ll be resistance from probably a majority, but I think that they will be initially aggressive. What we’ve generally seen with presidents in office is that even if they come in with a majority, typically two years later, the economy and the country tends to shift and they give the majority to the opposite party when they’re voting.”

According to Hoffman, the first 100 days is usually a period when the president attempts to accomplish a lot early in his term. Hoffman expects Biden to repeal Trump’s previous actions by re-entering the Paris Climate Accord, ending the Muslim ban and using executive action to cancel the Keystone XL pipeline. He also expects Trump’s impeachment to be a significant obstacle in Biden’s early term.

“He’s probably going to have to tackle possible issues with Donald Trump,” Hoffman said. “We know that it sounds like the House of Representatives is going through with their impeachment process. That could go to a trial. That could also impact what he does, and so there’s a bunch of big things that are on the table that he wants to probably tackle very early on, to let his American people know that it’s something that he’s concerned with.”

Mu believes that Biden serving in one of the most unique periods in U.S. history will make his first term historically significant, with issues such as racial and economic justice being brought to the forefront. In terms of how impactful Biden will be to the MVHS community, Mu believes that Joe Biden will not have a huge impact on the lives of most students. He explains that youth participation in local politics will lead to greater change than broader policies from the federal government.

“Regardless of what your political affiliations are, nothing is really going to change unless we do something about it,” Mu said. “Remember that the national government doesn’t really control much of the local government, so what goes on that will happen in the future is determined largely by what we do in our cities and our counties in our state. [Biden] can talk all he wants about changing things or not changing things, but at the end of the day, we live in Cupertino, we live in San Jose, we live in the Bay Area first above the United States because what happens here locally is much more impactful than what happens nationally.”

Ultimately, Hoffman believes that it is too soon to gauge if Biden will be a consequential president. America’s divided environment and the impact of the COVID-19 pandemic are top priorities, and it remains to be seen if Joe Biden will keep to his promises and transition the U.S. to a safer and stable country.

“It’s going to be a very interesting next four years for the United States to see what is going to change,” Hoffman said. “I think that things have to change in a lot of different areas of the United States … The economy, police brutality and health care [are] just really big topics and so it’s definitely going to be an interesting time in American history. Hopefully things change, we get some compromises and things are hammered out so that we can continue to grow as a country and make it the best place possible for people.”