How MVHS students became interested in the two popular genres 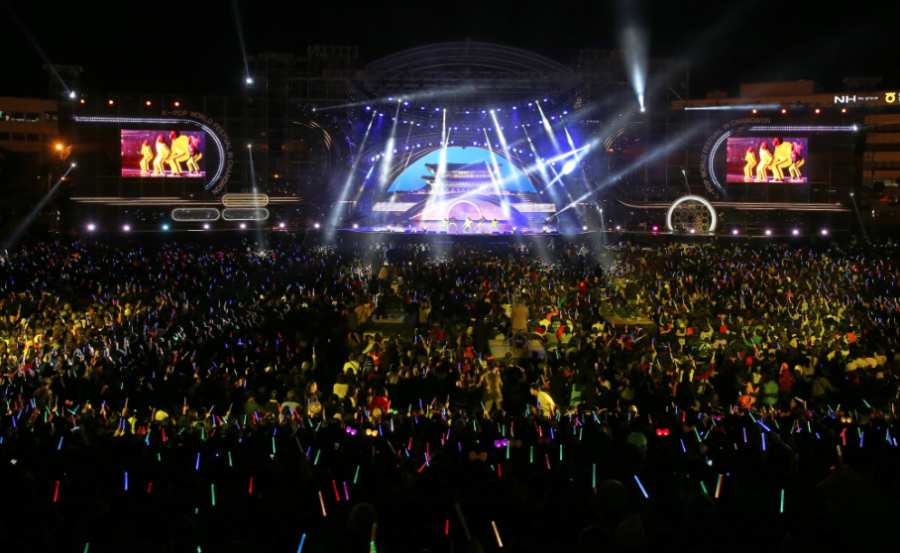 In the mid-1990s, Western bands and artists grew in popularity around the globe, inspiring musicians from different countries to incorporate aspects of Western music, such as jazz and rock, into their own pieces. Likewise, the entertainment markets of Japan and South Korea were influenced by the popularity of Western music, as many boy bands made covers of American pop songs.

While many composers in Japan simply translated the lyrics of American pop music into Japanese, others composed original songs that combined elements of Japanese and Western music into one song. For senior and Japanese Club co-president Asuka Tomonaga, this multicultural blend is what makes Japanese pop music (J-pop) unique.

“What makes J-pop interesting is that J-pop songs have different aspects from Western songs,” Tomonaga said. “I should not generalize all genres, but personally I think the use of language, which is Japanese, gives Japanese songs its own unique tone and tempo.”

Many famous J-pop groups and artists have contributed to the growth of the J-pop industry worldwide. The J-pop group AKB48 became the biggest music group in the world, and in 2003, had 130 members. Due to its large membership, AKB48 became a national sensation, performing concerts on almost a daily basis. Another J-pop group, Keyakizaka 46, expanded themselves by recruiting nearly 60 members over the years. Junior Yuke Wang also enjoys listening to the songs of Keyakizaka 46.

“So when I finished eighth grade and just started freshman [year], I was influenced by my classmates to listen to J-pop,” Wang said. “One of them liked J-pop very much and I was just curious how it was, and I just listened to myself. Some lyrics can even tell what I am thinking. My favorite band is Keyakizaka46, and their main theme is protesting injustice. They make me think about my history class, which is my favorite class.”

The growth of the J-pop market in Asia paved the way for other Asian pop music, especially South Korean pop (K-pop). Similar to the origin of J-pop, Korean pop culture started with the fusion of Western pop, hip-hop music and popular Korean songs in the 1990s. Soon, entertainment agencies began recruiting and training youth to dance, sing and perform this modern style of music. Dubbed ‘idols,’ many recruits made their debuts in groups. Sophomore Celine He shares that the idol dances first introduced her to the realm of K-pop.

“What attracted me into K-pop was the dances,” He said. “The dances are usually easy to memorize and there’s a lot of iconic dances. There’s also a lot of groups and soloists, and their songs and vocals are very nice. Most of the group songs are on beat, so they really hype you up.”

The female K-pop group “Girls Generation” first achieved global success in 2009, with its song “Gee.” Selling over ten thousand digital copies of the song, the group attracted fans from all around the world. In November of 2019, Blackpink, another female K-pop group, caught the public’s attention by becoming the first K-pop group to surpass 1 billion views on its music video “Ddu Du Ddu Du.”

“I was in seventh grade when I was on social media and saw a short video of Blackpink performing ‘Ddu Du Ddu Du,’” He said. “The music and dance really caught my attention and I went online to search for more information about them. They eventually became my favorite K-pop group.”

He believes that the popularity of K-pop and J-pop is evident at MVHS. She shares her experience with the MVHS Korean Club, where members regularly release cover dances of K-pop songs. He, who was also introduced to K-pop by her peers, now listens to K-pop as a source of motivation.

“As K-pop was getting more well known around the world, I realized that lots of my friends were also listening to K-pop,” He said. “We would discuss the new comebacks and K-pop artists. Whenever I listened to K-pop, I wondered how much effort artists put in just for more people to know them and listen to their songs. For me, I think that K-pop is a genre that can give me the motivation to do things and hypes me up all the time. ”

Similarly, members of the Japanese National Honor Society are passionate about Japanese music, according to Tomonaga. She believes that people’s interest in anime is another factor that attracts them into J-pop.

“Since every anime has an opening and ending theme song, I think that the influence of anime is very huge [in promoting J-pop],” Tomonaga said. “There’s a huge community of anime fans, so I think most of the J-pop fans learn J-pop from anime. Most of the songs that are used for anime theme songs are linked to anime stories, so that could also be a reason why people are interested in J-pop.”

Wang believes that the interest in the two pop genres is well respected in MVHS, including her passion towards J-pop and the overall Japanese music culture.

“I [don’t] see any bias in MVHS towards J-pop,” Wang said. “All of the students accept different cultures and different thoughts, and everyone respects each other. I’m hoping that one day there will be a club focused on J-pop.”

K-pop and J-pop provide entertainment to their listeners, but for some, the two music genres are more than simply a source of entertainment. Tomonaga shows personal connections with the two Asian pop cultures, and shares that J-pop is an important part of her childhood.

“I was born and spent more than half of my life in Japan, so I grew up listening to J-pop,”  Tomonaga said. “When I was attending junior high school in Japan, I took the train every morning to go to school. While I was on the train, I used to listen to J-pop songs, and that was very meaningful for me.”

He says that while some people might not be able to enjoy K-pop or J-pop because of language barriers, there is more to both genres than simply understanding the lyrics. To He, K-pop and J-pop are pathways to resonating with the music culture of different countries.

“Some people would think K-pop is a foreign language and people will be like, ‘If you don’t understand language, why would you even listen to it?’” He said. “What I think of it is that music is a way to connect people. You don’t have to be able to know [the] language in order to like this certain type of music. I think K-pop and J-pop both help people to get to know other cultures.”