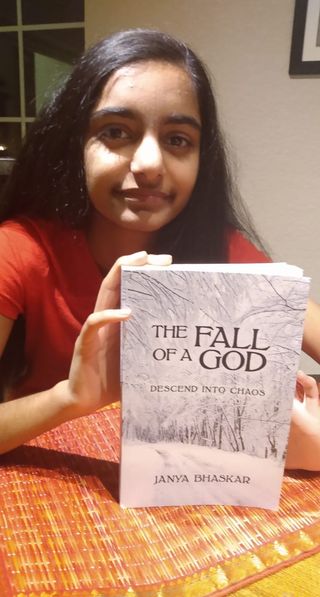 National Novel Writing Month (NaNoWriMo) is a creative writing event that takes place annually in November, which pushes participants to write 50,000 words over the course of one month. NaNoWriMo is currently a nonprofit that emphasizes creativity through writing, and is mainly a community-based event that has helped produce novels such as “Water for Elephants” by Sara Gruen.

Junior Manasi Ganti decided to participate because of her newfound free time due to the pandemic. Ganti has been writing for most of her life and has wanted to write a novel since middle school. She first heard about NaNoWriMo in sixth grade, yet she never had the chance to pursue it until quarantine.

“2020 is just sort of a ‘Why not?’ kind of year,” Ganti said. “I was going through a writing slump and I was trying to get myself to write more, and I [thought] OK, this is a good challenge.”

Junior Mahati Varanasi is currently working on her second publication. Her first book, “A Night in the Albornian Forest,” is a picture book about a forest and its animals who make peace with humans to save their forest from destruction. It was released in March of 2019.

“With [“A Night in the Albornian Forest”], I was dipping my toe into the water,” Varanasi said. “It was a quick book that I wrote in a week and a half; the illustrations were [done] in a week by my friend. I just wanted to … see what it would be like when I wanted to publish my big book or the one that I have been working on.”

Varanasi is currently writing a historical fiction novel, and she plans on publishing it through traditional publishing like she did with her first book. Varanasi learned many important lessons while trying to publish her first book, including which publishers to trust and how to hold her own as an author. She began writing her novel eight months ago, but her work has stagnated because of school.

“It’s something that [I’ve been] working on for a while — my main goal for this is just getting all my thoughts and all my writings down on paper,” Varanasi said. “It’s probably not going to be done for a little while because I have been so busy with school [and] I haven’t worked on it. [The] last time I worked on it was last week — it’s moving along a little bit slowly, a little slower than I thought.”

However, Junior Janya Bhaskar, another published author, finds that quarantine has eased the stress and workload of school, giving her more time to write. Bhaskar’s novel “The Fall of a God,” is about a teen and her friends trying to survive in a post-apocalyptic world, and she published it in June 2020. Currently, Bhaskar is working on a new series of books in a trilogy.

“The trilogy that I’m working on currently is a whole different universe, [and] for me, it’s about finding an idea and creating characters that you really, really like,” Bhaskar said. “With online schooling, there’s a lot less work than it would be in normal school. I’m getting an OK amount of sleep and I have time to do my hobbies and get an appropriate amount of exercise … so it’s made me more productive.”

Ganti also finds that quarantine gives her more time to write. Without the extra time of commute and other activities, Ganti is able to write more and increase her word count despite her lack of motivation.

“Even if I don’t write as much on a day, [I have to] be OK with that,” Ganti said. “[And I have] to remember that this is not a school assignment, this is for fun, and I can go easier on myself.”

Writer’s block and lack of motivation is something that Varanasi also experiences, and she combats it by taking breaks and reading. For her, writing isn’t the hardest part of working on a novel, but rather coming up with an original idea that she is passionate about.

“I think once you have a topic, all you have to do is just write down your thoughts,” Varanasi said. “If you want to have a topic or something that you want to write about, then you enter a world where you can literally write about anything, and then it’s your turn to look, revise, cut, edit [and] enhance.”

Bhaskar self-published her novel on June 29, 2020 on Amazon after completing it, and ordered many hard copies afterward. Although she believes there are areas she could improve on, such as her ending, she is proud of what she accomplished.

“I could scarcely believe that it was actually real; it felt kind of like a bit of a pipe dream,” Bhaskar said. “Until then, I entertained the thought in my head, but I never actually thought it would actually happen. After we published it, a couple days later on Amazon, the first few paperback copies came and it was very surreal, just like holding it up and [thinking], ‘Oh my God, I wrote every word in this.’”

Despite the fact that Bhaskar is in the process of writing the first draft of her new novel, she enjoys writing and takes pride in how much she’s written so far. She doesn’t plan on publishing the novel right away, as she is excited to see where it goes.

“I write because it’s just fun making your own world and making people do stuff in that world,” Bhaskar said. “I guess it’s like Minecraft creative mode — you can make literally anything you want happen and just have fun and see where it goes. And it’s one of those things where the journey is better than the end.”