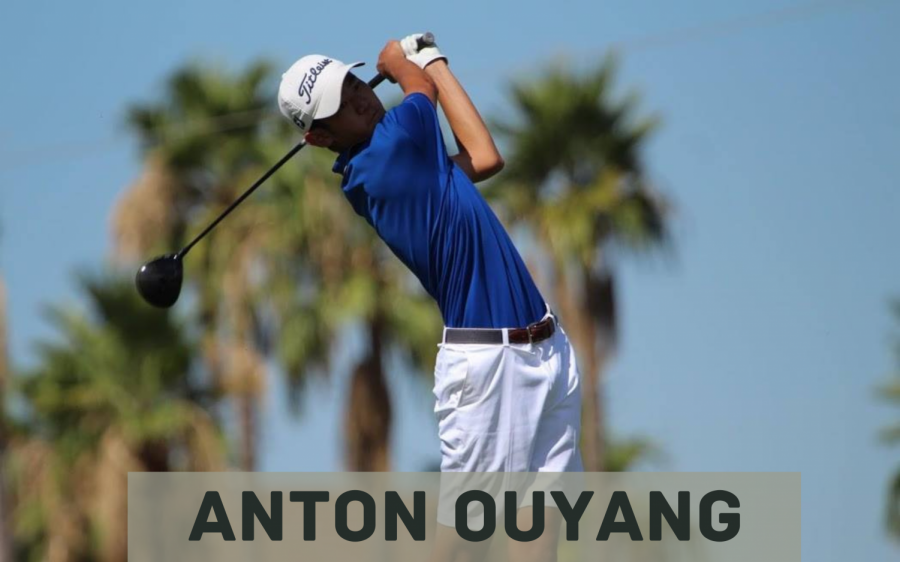 While his love for golf is the reason he’s so passionate about it today, Lynbrook High School junior Anton Ouyang was first enticed by the perfectly curated grass on the course. He was initially exposed to it while accompanying his dad, who shares his love for golf, during their family vacations.

“I would say my earliest memories [of golf] are actually not playing golf, but actually just playing around the golf course,” Anton said. “I love grass, so sometimes if there were steep hills, I would roll down them, which was a lot of fun for me. Ever since I was young, I’ve always been lucky enough to go out onto the golf course with my dad. Eventually I think I fell in love with it too.”

As Anton’s passion for the sport developed, golf progressively became less of a hobby and more of a competitive sport. Although he faced various challenges that come with playing golf at a competitive level, Anton believes these obstacles contributed to his love for the sport.

“I could go on and on about all the challenges golf has, but I think the main thing is [that] every time you set foot on the golf course, it’s different, and every single shot you hit is different,” Anton said. “So I think that’s just one of the challenges because sometimes when you practice for a super, super long time, you go onto the golf course [and] you still might not be able to perform, so I think it also teaches you a lot of life lessons too … I think striving for that perfection [and] working hard to get to [perfection] is really fun for me.”

Another ongoing challenge Anton faces is learning to balance golf commitments with other aspects of his life. Eric Ouyang, Anton’s father, has noticed the impact golf has had on Anton’s ability to manage time.

“Golf is really time-consuming, so he has to figure out what he needs to sacrifice,” Eric said. “For example, no T.V. or you’re only limited to one game a night. These are the things he says to himself. It’s not something we asked him to do. He knows he has to sacrifice a lot of things in order to keep doing well in golf.”

Anton also faced physical challenges during his journey with golf. Last summer, Anton suffered a back muscle tear at the California Amateur Championship and was sidelined for the rest of the summer. Consequently, Anton could not compete in the Junior World Golf Championship and a few AJGA tournaments he qualified for.

“He had a serious back injury right before the peak of the season in summer,” Eric said. “And then he couldn’t play the whole summer … He qualified for some big events but he could not play, and he was just sitting idle … He couldn’t get any ranking. His ranking actually got removed. So he started from a good status last year and then it suddenly disappeared … But then he decided he [was] going to rebound and emerge again.”

Looking back, Anton says he is proud of how he overcame his injury and improved as a competitive golfer.

“I think that [my injury last summer] was memorable for me transitioning into this year, because  from that I really learned how to be patient, to keep on persevering and keep working hard to be able to try to achieve your goals,” Anton said. “The most memorable experience for me was probably being able to come back this summer and finally play in my first tournament since like a year.”

In 2017, Anton won the Junior World Golf Championship, a yearly selective golf tournament for players from all around the world, in the 11-12 age group. Don Leone, who is Anton’s golf coach, discusses his win at the JWGC

“That is his biggest win,” Leone said. “No question … You are talking about kids from all around the world. And he won pretty big too; he played really, really well. He had every college looking at him when he did that … And that’s where all those college coaches go — they go to these tournaments.”

The tournament gave Anton the opportunity to talk with college coaches and he eventually got in touch with more college coaches through emails he sent to introduce himself. One of the schools he contacted was UCLA, where he had been in contact with the coaches since 2017. Periodically, he sent them updates about his progress with his tournament results. In August 2020, Anton committed to UCLA for golf and is looking forward to being a part of the golf team there.

“Golf is always an individual sport — I call it a really lonely sport as well because oftentimes, it is spending your own time practicing by yourself,” Anton said. “So I think playing in college is a little different, because you have a team to compete with and practice with, so just having that team atmosphere is really nice.”