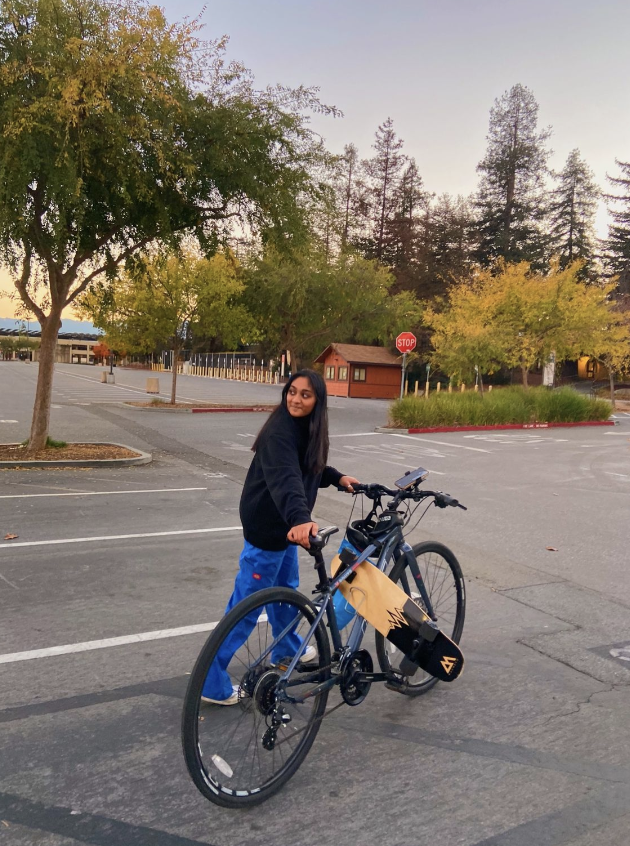 Dwivedi walks with her bike in the De Anza College parking lot after spending the day biking with friends. (Photo used with permission from Navarin Pirachai)

s schools and businesses shut down last March, the U.S. experienced a significant decrease in the number of cars on the road, as many individuals shifted to remote working and learning. Many also switched to other means of transportation, such as biking, to get themselves somewhere or to simply take a break from sitting in the confines of their homes.

Junior Shriya Dwivedi has her learner’s permit and is therefore unable to drive herself without her parents in the car, so she takes advantage of her bike to get to places, be self-reliant and simultaneously exercise. She notes that using the bike that she bought at the start at the pandemic has brought her “more freedom” to do what she wants.

“[Biking is] an easy way to get around and be independent and go out and do things,” Dwivedi said. “It’s definitely a workout, and [it’s] rewarding when you get to wherever you want to go. You don’t feel as good when you get to your destination [when you’re driving].”

Echoing Dwivedi’s opinion, sophomore Arti Gnanasekar prefers biking over driving and cites biking as a stress-free way to exercise while running errands or spending time with friends. While she has been biking for years, her bike usage spiked significantly when the pandemic hit.

“I had so much more time on my hands [because] last year, online school was not as stressful,” Gnanasekar said. “Since we finished school pretty early, I still had the majority of the day left, and I felt like I needed some exercise. I don’t think I would have biked at all [without the pandemic] because my extracurriculars would have taken up more of my time and I feel like I would have been doing many more other things [than] biking.”

Math teacher Martin Jennings sees the value in getting out of the house and using a bike as opposed to a car; however unlike Gnanasekar and Dwivedi, the amount of time he spends biking has not been influenced by the pandemic. As an avid bike rider for 56 years, he is used to getting to and from places with his bike rather than using his car.

Jennings primarily uses his bike to commute the one and a half mile trip to and from school, but he also uses it to run errands. Although he appreciates the scenic value of biking, the primary reasons he uses his bike are exercise and efficiency.

“I don’t usually just hop on my bike and go for a ride,” Jennings said. “I usually have a purpose to the ride, so I think that falls into the errands category. [But I also] like to ride my bike when I go to lunch with friends that are in Cupertino.”

Apart from errands, the social aspect of biking is also valued by Jennings, Gnanasekar and Dwivedi alike. Due to the stay-at-home order that was enforced on March 19 and subsequent orders to wear masks and socially distance, many struggle to see their friends or visit relatives. Gnanasekar explains that the extra time that she has due to the pandemic gives her the opportunity to bike with her friends and have a form of safe social interaction.

“Since I wasn’t able to see most of [my friends] during the pandemic, it was nice to catch up with a few of them and spend time with them [by biking with them],” Gnanasekar said. “I genuinely enjoy biking, but during [the] summer, my friends and I used to [bike as a way to] socially distance and spend time with each other.”

Although she enjoys biking with friends, Dwivedi shares that being able to bike on her own has played a positive role in her mental health during the pandemic.

“In the months that I used to go almost every day or every other day, making myself get out and [get] fresh air definitely helped me a lot,” Dwivedi said. “I think [biking is] definitely an outlet. It’s very peaceful, [especially] just to be biking by yourself.”

Jennings agrees that no matter the destination, the opportunity to get on a bike and experience the world around him has become an essential part of his lifestyle.

“I like to be out in the air, [and] be outside, and so there are times often when I’m riding my bike home, and [I’m] just thankful to feel the sun and the breeze and see the leaves in the sky,” Jennings said. “I know it sounds weird, but that I enjoy that.”