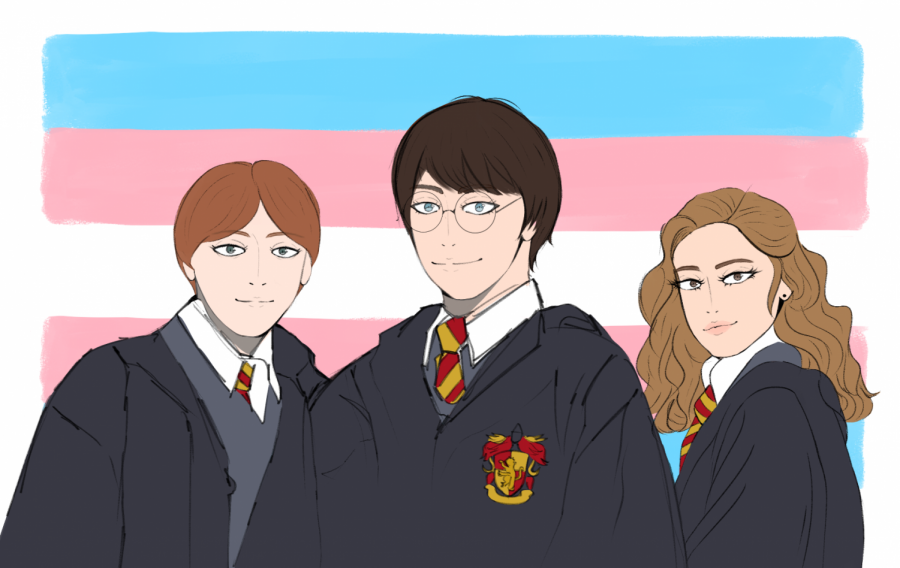 Student X is anonymous in order to protect their identity.

“Words are, in my not-so-humble opinion, the most inexhaustible form of magic we have, capable both of inflicting injury and remedying it.” This was the last message delivered to main character Harry Potter from his late mentor and friend Albus Dumbledore in the movie “Harry Potter and the Deathly Hallows,” and it was crucial in Harry’s defeat of the antagonist Voldemort.

More than 13 years later, Dumbledore’s words are especially relevant in addressing the recent controversies surrounding J.K. Rowling, the author of the Harry Potter series. Due to a number of events, many fans of the series have noticed Rowling’s transphobic tendencies on social media over the past several months.

Rowling has a history of showing support for transphobic groups and commenting that biological sex takes precendence over gender identity on Twitter.

On June 6, Rowling responded to an article by Devex on creating a more equal post COVID-19 world for people who menstruate. In her tweet, Rowling wrote, “‘People who menstruate.’ I’m sure there used to be a word for those people. Someone help me out. Wumben? Wimpund? Woomud?”

After this tweet, many more Harry Potter fans started paying attention to Rowling and her transphobic statements. Student X, who was one of these fans, identifies as non-binary and gender-fluid. They read the Harry Potter series multiple times throughout their life, explaining that their mindset had changed after learning about Rowling’s beliefs.

“Finding out that J.K. Rowling was, [for a] lack of better words, pretty s—-y, makes me hesitant to really enjoy the books as much, because whenever [I] find out that an author is kind of problematic … I start worrying about [whether their opinions are] shown in [their works],” Student X said. “[I think,] ‘What have I been absorbing and accepting as normal when it really should not be?’ [Rowling’s comments made] me reevaluate my experiences with Harry Potter in general.”

Similar to Student X, senior Meha Gupta, who shares that the Harry Potter series is an essential part of her life, explains that this situation has greatly impacted her view of Rowling. Gupta’s engagement with the series includes purchasing posters and other Harry Potter merchandise, traveling to the Wizarding World of Harry Potter at Universal Studios and watching a Harry Potter movie every year at her birthday party. However, after finding out about Rowling’s transphobic views, Gupta admits that she lost a great deal of respect for the author who she had previously admired.

“[I] try not to support any group or people … that I don’t align with.” Gupta said. “If I wouldn’t support that in a friend, I wouldn’t want to support that in a celebrity. In that sense, I try to do that as best as I can. But I think it’s a little different with Harry Potter, just because [it] has been such an influential part of me growing up. I’m trying to separate my views of Harry Potter and J.K. Rowling because I already own so much Harry Potter [merchandise] that it would be useless to just get rid of it.”

The situation regarding Rowling’s transphobia escalated on Sept. 14 when she released her book “Troubled Blood,” in which a cisgender man dresses femininely to pursue and murder cisgender women. Junior Issa Baca, who identifies as a transgender male and bisexual, has read the book and acknowledges the different ways people may feel regarding the novel.

“I feel like I can speak from two sides of the story,” Baca said. “When I see people talk about [the novel and how it’s transphobic], what makes me question where they’re coming from is that I don’t [see the] comparison between the main character, who’s not trans, to an actual transgender person. To me, that’s transphobic ー to consider being trans as just a man in a wig. But on the other hand, I think that it was incredibly immature to … release a book where one of the characters is ‘trans’ and have [them use this identity] for dangerous acts like for murdering people.”

In an essay titled “J.K. Rowling writes about her reasons for speaking out on sex and gender issues” published in June 2020, Rowling wrote, “I want trans women to be safe. At the same time, I do not want to make natal girls and women less safe. When you throw open the doors of bathrooms and changing rooms to any man who believes or feels he’s a woman … then you open the door to any and all men who wish to come inside. That is the simple truth.”

Many believe that Rowling’s views align with those known as trans-exclusionary radical feminists, or TERFs — people who do not consider transgender women to be women. Instead, TERFs view transgender women as predators because they were born as male, and therefore will always have the ability to oppress those born as female. Student X finds that the danger of TERFs’ beliefs come from the fact that their ideas stem from feminism.

“Obviously, [TERFs’] ideas are terrible, but [they] can also be pervasive because they build their stance off of ‘We want to protect women,’ and ‘We want to fight predators,’ which is obviously a great stance to take,” Student X said. “As a feminist, that is also what I want to do. The issue is that TERFs take it to a point where they’re not helping people. They’re just actively harming people. And the way that they frame it, it sounds like, ‘We are the good ones here, these people are evil’ — it can really get into your head and it’s hard to see it as something wrong.”

Baca echoes Student X’s opinion on TERFs, having had to deal with some in the past. In his experience, TERFs rarely try to have a civil conversation with him and use his legal name or the wrong pronouns as an insult.

“TERFs are annoying because they think that being trans is an attack on them,” Baca said. “For example, they think that me wanting to transition to male is somehow against their feminism, which I just think is ludicrous. [Rowling] is definitely a TERF, there’s no denying it.”

In light of the recent controversies, the multitudes of “Harry Potter” fans in the world are wondering how to reconcile the author of their beloved series with an ideology that they disagree with. Responses have included boycotting the series, burning books and using the Twitter hashtag, #RIPJKRowling, which started trending after the publication of “Troubled Blood.” Many people are using this hashtag in response to Rowling’s recent comments, showing that they believe her career is dead. Baca believes that while J.K. Rowling’s attitude thus far has been immature and rude, the fans shouldn’t stoop down to her level.

“[Those responses] seem just as much of a low blow as what she has said about trans people,” Baca said. “The biggest thing that people can do is [to] just ignore her tweets and let those opinions float away in the air and become dust.”

However, there are public figures and others who continue to support Rowling. Robbie Coltrane, who played Rubeus Hagrid in the Harry Potter movies, is one celebrity who has stood by Rowling and her beliefs.

According to an article by Insider, Coltrane stated that he didn’t find what Rowling said offensive and that “[T]here’s a whole Twitter generation of people who hang around waiting to be offended.”

On the flip side, several other actors involved with the Harry Potter franchise have openly opposed Rowling’s statements, including Daniel Radcliffe, Emma Watson, Rupert Grint and Bonnie Wright. In a blog post on The Trevor Project, Daniel Radcliffe wrote, “Trans women are women. … To all the people who now feel that their experience of the books has been tarnished or diminished, I am deeply sorry for the pain these comments have caused you.”

However, Gupta believes that it’s important to do more than just make public statements into support of the transgender community.

As many fans become increasingly disappointed with Rowling, there have been conversations on how to support the transgender community and possible speculation on whether or not Rowling can redeem herself by becoming an ally. Baca believes that everyone deserves a second chance, including Rowling. To resolve the situation, he would first like to see a public apology from Rowling, followed by other actions in which she demonstrates her commitment to the LGBTQ+ community.

“I would love to see her on some sort of a podcast with someone who is trans and for them to talk about it,” Baca said. “She could also support LGBTQ+ charities because still to this day, there are so many trans kids who are homeless, shunned by their parents, going through a hard time and have depression.”

Student X agrees with Baca and believes that if Rowling were to issue an apology and then continue to actively undo the damage she has caused, she can set an example for how people can learn from their mistakes. However, according to Student X, no matter what Rowling does, some damage can simply never be undone.

“Just because someone tries to redeem themselves or tries to fix their mistakes, [this] doesn’t mean that the people who have been victimized by them have to immediately forgive them,” Student X said. “Because forgiveness is something very complicated. Even if J.K. Rowling tomorrow said, ‘I’m sorry, I’m going to help trans people,’ and does [help them], I don’t think that people are required to forgive her immediately until she does prove that she is able to help these people. And even at that point, they are not required to accept her with open arms. I think she screwed up big time, but she can still make her way back and hopefully undo this.”