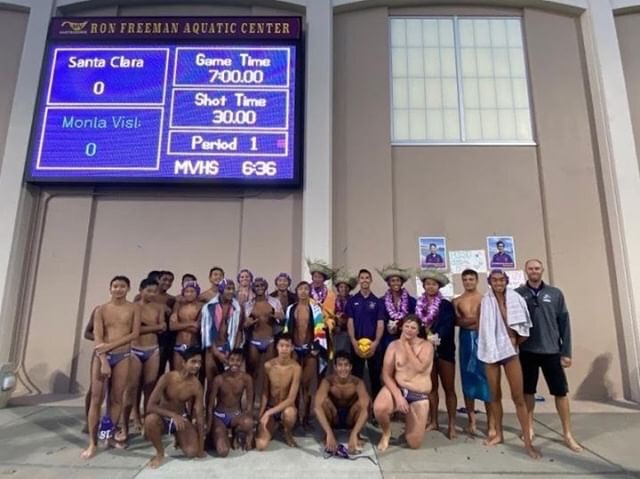 The boys water polo team celebrates its senior night in the 2019 season.

Sophomore Allison Kyotoku entered her freshman year with a goal in mind: become a tri-sport athlete during the 2019-20 school year. In the fall of 2019, Kyotoku joined the Girls Tennis team for fun, forming close friendships with many of her teammates during games rather than being too focused on winning. In the following winter season, Kyotoku played on the Varsity Girls Soccer team, which proved to be a more serious undertaking — within the first few minutes of her first game, she felt a jump in intensity from Junior Varsity to Varsity.

Although Kyutoku didn’t get the opportunity to pursue a third sport in the spring season due to COVID-19, she shares that participating in two sports teams has already given her exposure to different team environments and types of workouts. Similarly, sophomore Jasmine Varma and sophomore Aditya Mellacheruvu have enjoyed participating in multiple sports during the school year.

Varma shares that being a part of the Cross Country team has helped improve her stamina for her other team, Girls Basketball, often allowing her to run ahead of other players for offensive plays during games. Mellacheruvu trains on the Swim and Boys Water Polo teams, and he has also noticed the physical benefits of year-round training.

“Even if you’re doing something such as water polo, a lot of your practices are just going to be swimming,” Mellachuruvu said. “In water polo, the faster swimmer is always going to get to [the] ball first.”

Beyond the physical advantage of training across seasons, some athletes find that participating in multiple sports builds cooperative skills and allows for different forms of team bonding. Sophomore Maya Mizrahi, who participates in both Girls Water Polo and Track and Field, shares that while Track and Field is a more individual sport by nature, she finds that both group environments are equally strong.

“For Track and Field, you definitely have to make more of an effort for there to be team bonding,” Mizrahi said. “Just because of the nature of the sport, it’s really easy to form your own little groups of friends that you already know. But I think Monta Vista’s Track and Field team does a really good job of integrating the newer kids and the older kids.”

As an athlete on the Swim and Varsity Boys Water Polo teams, junior Luke Bowman says that team sports like Water Polo can more easily share group accomplishments. One of Bowman’s favorite moments in Varsity Boys Water Polo was defeating Wilcox HS, the number one seed of the league, before the 2018 playoffs. Bowman notes that MVHS had been rivals with Wilcox HS for several seasons, and this served as a uniting moment for the entire team.

“I was doing Track and Field for MVHS, six days a week, and I was also doing spring Water Polo for my club team three days a week,” Mizrahi said. “It was definitely hard to manage that, and obviously, you get very fatigued when you exercise that much. It’s hard to stay awake enough to finish out school properly as well. I managed to balance all of it in the end, but it was definitely a challenge.”

Varma also faced a challenge from participating in multiple sports: after shelter-in-place restrictions were imposed due to the COVID-19 pandemic, she was forced to choose between one cohort to train with — Girls Basketball or Cross Country. After choosing Girls Basketball, Varma missed out on some aspects of the group atmosphere of running with her Cross Country peers, but still joined in on team bonding events and ran with a partner.

Despite the challenges, these athletes recommend pursuing multiple sports, regardless of athletic ability. Mizrahi shares that even for those who don’t currently view themselves as athletic, sports can teach you things beyond just athleticism, such as discipline, resilience and time management. Bowman echoes a similar sentiment and suggests trying out sports for both mental and physical health benefits.

“Even though joining sports may take off time during your day, if you think about it, we’re not studying 24 hours in a day,” Bowman said. “I think [sports are] very important for your health, physically and mentally, because it’s kind of a stress reliever, too. And it’s good to have a goal outside of school. Swimming, or Water Polo or whatever sport [you do will] really help you get to that good mindset and you [also] learn how to manage your time wisely —  I think [that’s] very important.”