Free speech should be protected

Examining the ramifications of shutting down speech 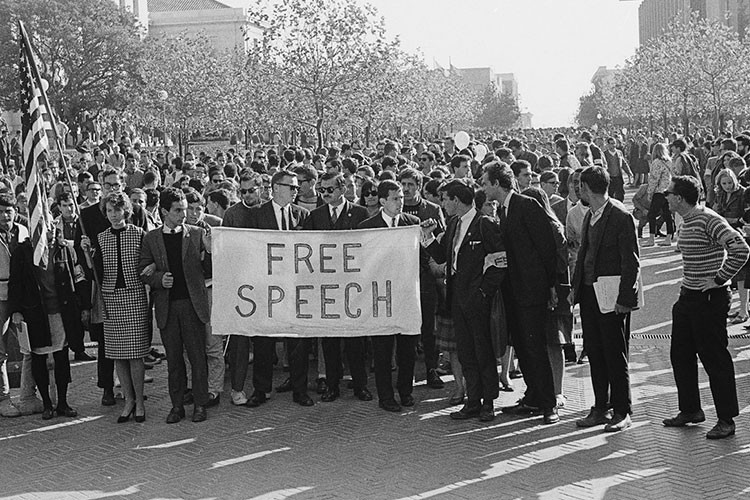 A group of people bring Free Speech signs to a University Hall on November 20, 1964

reedom of speech is one of the main tenets of our country. It gives citizens the ability to freely share ideas and beliefs without fear of punishment or censorship, however controversial or unpopular they are. Free speech gives everyone a chance to voice their beliefs, including the unpopular ones, and also a chance for others to listen. If we shut down speech we deem offensive and unpopular, it removes the objective of free speech altogether.

Although we are able to freely speak our minds without legal consequences, there are certain types of speech that are already prohibited in the U.S. This includes incitement to imminent lawless action, obscenity, fighting words, defamation, child pornography, perjury, blackmail, true threats and solicitations to commit crimes. According to The Supreme Court, any speech that promotes “clear and present danger,” like threatening to kill someone, is not protected by the First Amendment. However, speech that is purely a belief or an idea, no matter how much it may offend another person, is protected under the First Amendment and always should be.

Many people, typically left leaning, believe that certain types of speech that target or oppress minorities should be censored, and while those moral exceptions are understandable, free speech can actually be more effective to fight discriminatory speech. Minority groups, especially those underrepresented in our political system, have vulnerable voices, and giving the majority groups the power to dictate what types of speech should be inhibited can worsen oppression. Human rights activists Peter Tatchel, in an article from the Index on Censorship, says, “Free speech does not mean giving bigots a free pass. It includes the right and moral imperative to challenge, oppose and protest bigoted views. Bad ideas are most effectively defeated by good ideas – backed up by ethics, reason – rather than by bans and censorship.”

An example of free speech benefiting minority groups is the women’s suffrage movement, which helped women gain the right to vote on August 18, 1920. The National Women’s Party Suffrage campaign was highly influential and brought to light issues of inequality between men and women, starting with giving women the right to vote — through many petitions, parades, protests and even rebellious acts.

At the time, it was unacceptable for women to behave in a disobedient manner, and fighting for their rights to vote was seen as offensive towards men and even other women didn’t support the cause. However, the suffragettes were able to succeed because they relentlessly fought and spoke up for themselves, which would’ve been impossible without the First Amendment. Due to the fact that taking offense is subjective to every individual, it is likely impossible to eliminate speech to fit everyone’s desires. The women’s suffrage movement could have been completely eliminated if there were laws that gave the government the right to legislate the things we say because of their potential to be taken offensively.

The very reason marginalized groups such as the Black community, women and the LGBTQ+ community, have made tremendous progress is because they fought for the ability to speak freely and fight for what they believe in despite their views being unpopular at the time, so why would we strip citizens of this right?

Disagreements and clashing ideas aren’t harmful; they spark progression. Without them, we would only be restricting ourselves to only looking at things from one perspective. An example of this is that in the MVHS community, we tend to automatically accept ideologies that are always present to us. Living in California, where the majority of the population is liberal, often leads us as students to disregard concepts from an opposite viewpoint without actually taking the time to learn about them from a place where these ideas aren’t misconstrued.

Due to the environment we live in, our mindsets are very different from people around the country and it’s important to acknowledge and understand them accurately even if we completely disagree. To sort between good and bad ideas, we must express and articulate them with the opposite side. If we are unable to think and challenge ourselves to beliefs we’ve been exposed to, we will not grow and develop as people and will struggle to coexist in other cities where opinions are more diverse.

The ability to question our own ideas and refine our views will be taken away from us if everyone with opposing viewpoints is automatically shut down by legislation. The best way to strengthen our argument is to consider the other side — understanding a different approach to things can solidify an argument and help refute it to the majority. And some may take advantage of the right to freedom of speech to spew racist and derogatory terms — behavior that, however unethical it may be, is protected under free speech. As author Julie MacLellan mentions in a Burnaby now article, “Ideas can be stupid, uninformed and idiotic without being illegal,” and the best way to tackle this is by refuting it using our ability to free speech as well.

The necessity and power of free speech and the ability to freely exchange ideas and thoughts is so important that the founders of our country deliberately did not give the government authority over it. By giving the authority control to legislate the language and ideas we are able to express, we are likely to be led into a tyrannical government.

Suppressing different ideas doesn’t solve the issue of hateful speech. Even if certain kinds of speech are banned, they will likely continue “underground.” This worsens the situation since harmful ideologies are never publicly refuted, creating ambiguity and confusion. Shutting down speech, whether or not it be hateful, also causes us to disregard ideas beyond what we’ve been exposed to, damaging our ability to reason. Those whose ideas are considered offensive and unpopular will also proceed to spread these hateful ideologies without being questioned or reasoned with, even if not brazenly and publicly.

In order to bring change to the issues we face, we should be vocal and encourage others to be as well rather than to shut people down to avoid being potentially offensive. It’s better to know the “bad” ideas well enough to be able to fight against them correctly; banning them will only decrease the awareness of these issues. Practicing free speech by being more vocal in our communities when we notice inequality will overpower the hateful speech others may take part in and will increase awareness of issues we face.