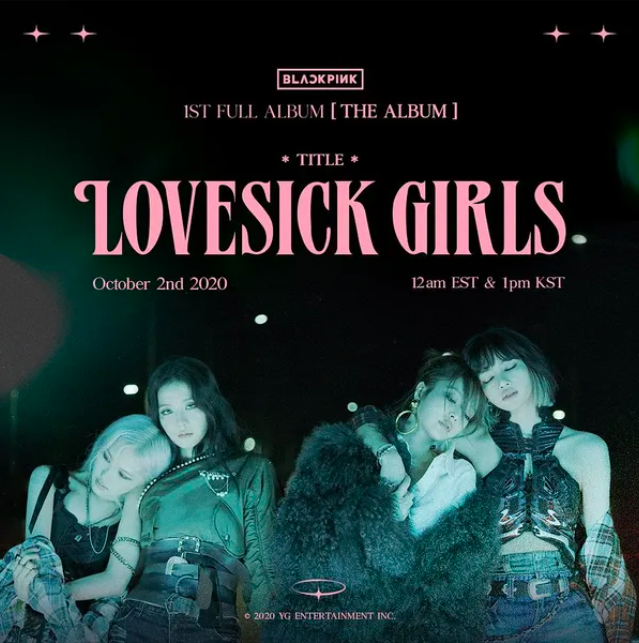 orean pop sensation Blackpink is a four-member South Korean girl group formed under YG Entertainment — one of the three biggest K-pop entertainment company tycoons. Following the popularized girl-crush brand after their predecessor group 2NE1, Blackpink quickly rose to fame after debuting in 2016 with the hit single “BOOMBAYAH.” Blackpink emerged as global superstars through the 2018 title track “DDU-DU DDU-DU,” heavily appealing to the Western market due to its iconic choreography and addictive verses. With an alluring blend between the sweeter “pink” brand and the daring “black” style, Blackpink is now one of the best charting K-pop groups both domestically and internationally.

Contrary to most K-pop groups that release two to four new music “comebacks” per year (title track and b-side promotions), Blackpink has followed a strict one year comeback formula since 2017 — the group promotes on music shows for a month and spends the rest of the year on hiatus. Due to company mismanagement, Blackpink’s notorious one-year comebacks are lackluster in quantity and quality — four track mini-albums such as “SQUARE UP,” recycled songs such as “Forever Young” and repackaged remixes of the same songs. As the top record-setting girl group of the third K-pop generation, Blackpink has disappointingly not released any full-length albums with newly produced songs.

However, the wait was finally over when on Sept. 20, Blackpink enraptured the K-pop community by announcing on all social media platforms that the group’s very first full-length album titled “The Album” was in the works. After four years of anticipation, Blackpink released “The Album” on Oct. 1 PST with “Lovesick Girls” as the title track. While “The Album” presented vocal diversity and slight sound experimentation, it frustratingly does not show the group’s variation in musicality nor its artistic growth since “BOOMBAYAH.”

The 2019 release of the cutting edge title track “Kill This Love,” which accumulated over one billion views on YouTube, set the bar especially high for “Lovesick Girls.” However, “Lovesick Girls” did not follow the heavy bass, loud party beat drop and boss woman persona of this prior release. Instead of guns and the sassy yet icy lyrical messages, “Lovesick Girls” felt more gentle, displaying the softer “pink” concept instead of the heavier “black” brand.

“Lovesick Girls” uses a rhythmic guitar strumming instrumental instead of a hard beat, immediately creating more quiet and ambiance. The guitar build-up in the bridge, coupled with the chanting of the chorus, creates a nostalgic 2010s pop sound, a genre that is both refreshing and new for Blackpink. The sentimental instrumental, the raw vocals in the bridge and the intense heartfelt lyrics (“Maybe it’s all just for a moment / What are we looking for so aimlessly”) breathe more vulnerability into the track, making “Lovesick Girls” bittersweet to listen to.

“Lovesick Girls” also sounds more like a Westernized song than a K-pop track, as there seems to be minimal beat breaks, beat drops and empty choruses for fanchants. There is more fluidity and connectivity between each rap and vocal verse with each member seamlessly transitioning to the next. This makes the mood shifts in “Lovesick Girls” dynamic and an instant song to set on repeat.

However, what makes “Lovesick Girls” an overall disappointing listen is the general thematic narrative of the lyrics. Blackpink’s entire discography speaks to either heartbreak or moving on from a lover. While this in no way detracts from Blackpink’s chilling stage performances, the falling-in-love trope becomes slightly redundant to listen to. “Lovesick Girls” follows the same cookie-cutter theme of searching for love and hurting in a relationship, similar to “STAY,” but fashioned to be a more radio mainstream version.

“Pretty Savage” is arguably what Blackpink is best at — the classic, up-in-your-face swagger type of electronic track. In this song, Blackpink returns to its trademark heavy bass and chilling beat drops, making “Pretty Savage” a solid runner-up for the title song if it weren’t a side track. In comparison to “Lovesick Girls,” “Pretty Savage” presents the “black” concept of Blackpink with fierce rap verses such as, “if you mad stay mad, we not alike” and “f-boys, not my boys.”

What makes the composition of “Pretty Savage” more complex is that the beat is laced with piano playing in the song’s opening and serene guitar strumming in the bridges — a stark contrast to the otherwise fiery undertone of the song. This juxtaposition makes the message of self-empowerment in “Pretty Savage” more upfront and powerful. While the back-and-forth between sweet and intense may sound jarring and messy to others, this complementation actually suits Blackpink’s style well. “Pretty Savage” also shows off the richness and depth of member Rosé’s voice, as her parts in the track alter between these two concepts.

“Love to Hate Me”

As one of the only two entirely English b-sides in “The Album,” “Love to Hate Me” similarly displays the cutting-edge heat that Blackpink has consistently brought to the table in its discography. However, “Love to Hate Me” is entirely different from “Pretty Savage” in the way the lyrics are delivered and performed. Whereas “Pretty Savage” is more upfront and explosive, “Love to Hate Me” presents more sass and attitude for the listener. This adds dimensionality to the members’ rap flow and vocal depth, showing that Blackpink can pull off the same impact in a completely different style.

“Love to Hate Me” sounds more flirtatious because of how the members execute lyrics about playful romance in an almost casual, laid-back way. From the way member Jennie sings the line “stressing over nothing, baby relax” to member Lisa slowly rapping “I need you, nah, I been good lately” in the chorus makes “Love to Hate Me” so flavorful. “Love to Hate Me” also demonstrates that the members of Blackpink don’t need booming sound effects to create the same icy-female impact — a definite step up from “Kill This Love.”

There is no doubt that Blackpink has the talent, charm and charisma to produce hits that stretch beyond its comfort zone with the group’s ever-growing success. Even though “The Album” is a reiteration of everything that Blackpink has done and delivered, it also creates a new baseline for Blackpink’s untapped potential.

While every one of Blackpink’s songs undoubtedly has the Blackpink touch to it, the one dimensional break-your-heart storyline is oversaturated. Blackpink has not stepped beyond its signature musical electronic-pop style. The group may have topped music charts worldwide and swept award shows clean with streaming wins, but its artistic creativity appears to stagnate because most, if not all, the music production is directed by YG Entertainment — not the girls. Unfortunately, YG Entertainment has not nurtured Blackpink’s musical growth with “The Album,” and still seems to be replaying the age-old 2016 to 2017 formulas to its songs.

“The Album” is a paradox — it shows off the “black” and “pink” dichotomy of Blackpink through innovative sound combinations, yet it’s far from innovative. Even after a four-year wait, it still seems like Blackpink hasn’t pursued any new style of music besides the over-exhausted girl-crush archetype.