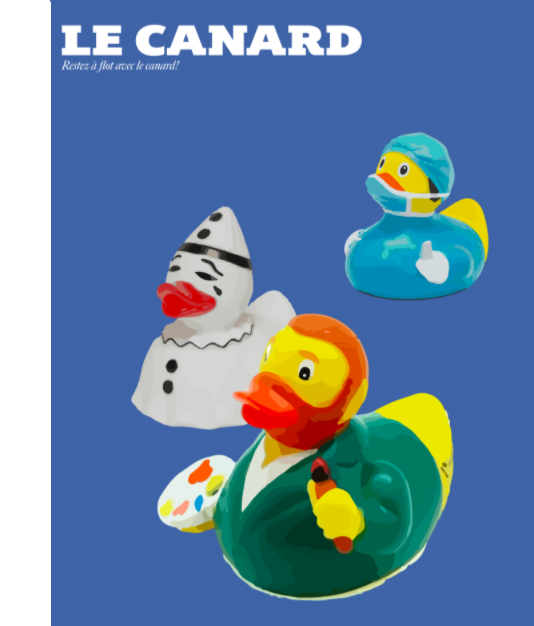 The cover of the second edition of Le Canard designed by senior Victor Li.

n late January of this year, senior Arya Das was scrolling through old websites linked on the MVHS club list and stumbled across a former MVHS French publication called “Le Crayon Coloré,” a magazine that published students’ articles in French. Interested, Das asked French teacher Sarah Finck if she could join, eventually discovering that it went out of publication five years ago. As a result, Das was encouraged to create a new French magazine.

After receiving Finck’s support, Das decided to contact senior Akash Dasgupta in February to be her co-editor-in-chief and help run the magazine. Das shares that one of her main reasons for starting the magazine, called “Le Canard” (which translates to “The Duck,” a slang word for newspaper), was to grow the French-speaking community at MVHS by having a platform that highlights what she personally thinks is fascinating about French.

“l just think, [with] the [MVHS] French program, people should be more involved in it,” Das said. “I wanted to express my creativity –– [for example], I do comics for our editions. I wanted to highlight the parts that I found cool about French … [Sometimes] people [think], ‘Oh, [learning French] is just memorizing verb tenses,’ [and] it’s [not that]; it’s learning about a different culture, learning about how people see things in [that] culture, their news, the food [and] the art.”

After inviting several more students to be a part of the magazine, Das and Dasgupta began planning their first edition, with the help of senior Victor Li, creative director at Le Canard. As creative director, Li does several tasks, including designing the layout for the magazine editions and managing the website and social media accounts. Li explains that while designing, he likes to emphasize professionalism while also creating an easy-to-understand product for high school students who are learning French.

Due to the fact that the three began planning their first edition in mid-March, the process of making Le Canard has been conducted entirely online. The three officers first create a document of topics for the edition, such as news, culture, art and media from France or other French-speaking countries. One of Das’ personal favorites in every edition is the French “slang section.” These topics are then shared with staff writers and their articles are all collected into one large Google Doc, where Das and Dasgupta edit each story, checking for grammar and punctuation. Das notes that they often receive editing help from the two MVHS French teachers, Finck and Janissa Zahn. After editing, Li begins planning the magazine’s layout, individual page designs and the visuals for each story to eventually create the final product to publish online.

Staff writer and junior Lavi Sundar emphasizes that Le Canard has been a great opportunity for her to express her love of French through writing. She is currently working on an article about romance languages and how they relate to French. Sundar notes that she has always been interested in linguistics and the phonology, morphology and etymologies of French, Latin and other “romance” languages. Sundar says that she not only has been able to write about topics she’s passionate about through Le Canard but has also been able to be a part of a great community.

“It’s just really nice having people with similar interests all around me,” Sundar said. “In my immediate group of friends that I hang out with every day, most of them are taking Spanish, so I was always looking for some people to share my love of languages and specifically French. So I’m glad that I have this group right now.”

While in the process of making their second edition, Li discovered two publication competitions held by an agency of the French Ministry of Education. The team submitted their second edition of Le Canard to the competition, eventually winning first place in the international category against other schools from French-speaking countries like Morocco.

“It was just really crazy to me how I started this [publication], I got people to help me, we created this [magazine] … and then we ended up winning [the competition],” Das said. “I think it’s really cool that all of us work[ed] together and somehow made a product that was pretty good.”

Shortly after the competition, a school from Agadir, Morocco that placed second in the competition with its publication “Le Lycéen,” contacted the Le Canard team, asking if they would be interested in a collaborative edition. Das explains that the writers from both publications met via Zoom over the summer and are planning on collaborating on their fourth edition, which excites both her and Li.

As Le Canard begins to publish more editions, Sundar encourages students who know or are learning French to take a chance to join the publication team, which is now an official club at MVHS.

“Don’t be intimidated by the length of the article,” Sundar said. “As soon as you open up that Google Doc, you look at how large the page is and you’re like ‘how am I going to fill this up with French? I don’t speak French [fluently] –– I’m not that good at French.’ But once you start writing, you really get into the flow of things and it becomes easier. It doesn’t feel like you’re writing [an] essay … There’s none of that pressure. It’s much more like a place for you to express yourself and improve in a language that you may not speak so well.”

With the new school year starting, Li explains that some of the team’s main goals throughout the year consist of increasing the number of people on their mailing list and recruiting more students to write for the publication. Li shares that Le Canard can offer several great opportunities for students who are interested in French and want to be more immersed in all aspects of the culture.

“I think it’s important that kids at [MVHS] can express their more creative side through Le Canard, while also just having a chance to practice their French reading and writing skills,” Li said. “I think Le Canard is probably one of your only opportunities to take your love for French and French culture to the next level and to become just really engaged with the language.”