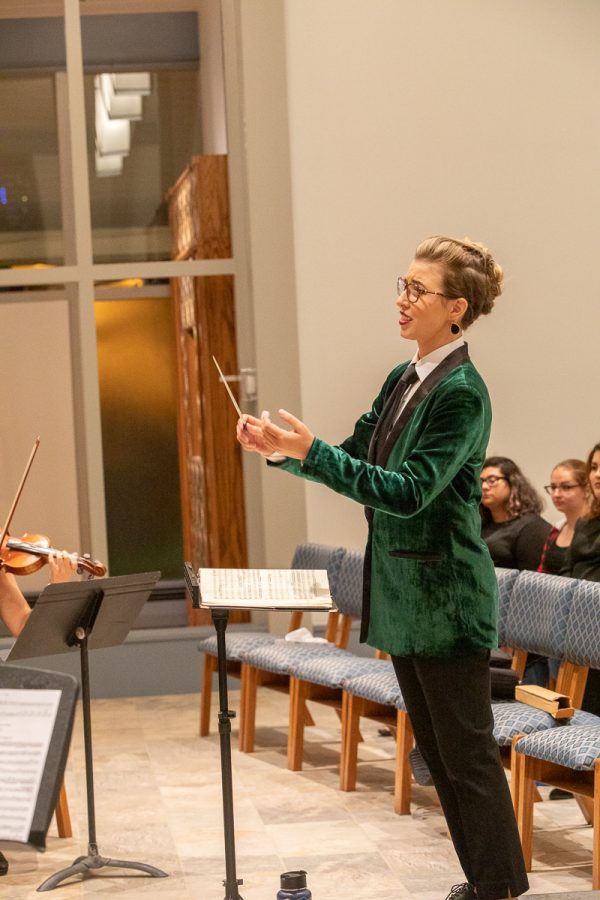 Choir teacher and Music Department Lead Amy Young at her Graduate Conducting Recital, which she gave in October 2019 as part of her Masters Degree in Choral Conducting from SJSU.

During his first Variations class of the new school year, senior Isak Westelius was abruptly confronted with the music video “Just Sing,” from the Trolls World Tour soundtrack — and he says he “didn’t know what to think.” This was his first impression of the new Choir teacher and Music Department Lead, Amy Young. However, as the class progressed, Westelius’ opinion of his new teacher quickly changed and he was glad to discover an ambitious, focused side of Young’s personality.

“The choir at Kennedy [MS], especially during the time when I was [there], was really, really competitive and [we] did a lot of competitions and traveled a bunch,” Westelius said. “What I missed when I got to [MVHS] was that we have not really done competitions very much and because of that, there isn’t the same drive to get better and perfect things. But what was great about Young is that from the get-go, she wasn’t fine with just, ‘let’s just sing through this.’ [She’s] like, ‘you have to sing it but you also have to sing it well’, which [is] more work but it’s also more satisfying in the end.”

Westelius also appreciates Young for her experience with Zoom, which allows for smooth classes without awkward pauses. He believes that much of this efficiency can be attributed to the fact that she is new to MVHS and has never taught high school choir before — therefore, she doesn’t need to adapt an old teaching format to fit Zoom, which many other teachers have had to do.

On the other hand, junior Taralynn Kang, who is in Variations for the first time this year, says  Young’s comfortable, welcoming energy is what she enjoys most.

While Westelius agrees that he would have had a similar impression of Young whether in person or over Zoom, he recognizes that there may have been slight differences simply because of the fundamental differences between Zoom and face-to-face classes.

“Usually before a class starts, you see the teacher talk to somebody in the room, sort of do their thing and then you get started,” Westelius said. “But over Zoom, you just get thrown into class from the very start. I guess it would have been easier to gauge her personality earlier on if we would have been in an actual classroom, but I think she does a good job of doing Zoom class.”

Young says she was also deeply impressed by her interactions with students, even when separated by a computer screen. She says she looks forward to being back in school together with her students, where she will be able to meet them in person for the first time.

“[The students here are] so thoughtful, and they’re so well-spoken and just really have fantastic ideas,” Young said. “They’re so engaged in their own education, and I really appreciate that. I really enjoyed getting to know them a little bit over the last few weeks.”

Additionally, Young is fascinated with the Bay Area’s diversity, which contrasts the less diverse community in Florida, where she spent her childhood. However, at the same time, she recognizes that much of her passion for music originated in her home state of Florida — Young says she loved growing up with Southern music.

“[Southern music has] that homey feeling that the South is famous for, the Southern hospitality,” Young said. “So [the South] does feel like home. But I do really love the diverse populations and ideas that are [in Cupertino]. And I think that spending time in Florida really helped me grow a lot, and appreciate different viewpoints from there.”

Young has been involved in choir since she was 6 years old, later joining her high school and college choral programs. She has been teaching for the past nine years, including: middle school for a year, high school theater and musical theater for five years, two years of college music and various elementary and community choir camps and programs.

For Kang, Young’s experience with music is reflected in her teaching style, in which she emphasizes singing technique. Kang appreciates Young’s focus on details and knowledge about the physiological aspect of singing.

“In the beginning, I was just like, ‘What a great teacher, this is gonna be so fun,’ and I still feel that way, but I think I’ve also been really impressed [with] her physiology knowledge of the vocal mechanisms,” Kang said. “She’s very technical, very thorough and she likes to make sure that everyone understands what we’re doing [with intricate techniques] like pronunciation and background.”

Young first visited MVHS last October during a mini-tour of various high schools in the Bay Area. While waiting in the auditorium, she remembers thinking how great it would be to work at the school. Once the job became available, she applied and was selected for the position. Young had anticipated that school would be starting remotely in the fall and recognizes the necessity of the situation.

“I had guessed, and I had [really] hoped that we would start the year remotely just until we get a little bit more of the pandemic figured out,” Young said. “I think that I certainly feel safer being at home, but it does present its challenges. I look forward to really being able to connect more with students over Zoom as much as I can until we are in person and we’ll work on ways that we can make music together virtually.”

Young also says she appreciates the silver linings of distance learning, such as extra time for sleep and self-care.

“I’m grateful for the perspective and the opportunities to grow that have come through this trying time of social isolation,” Young said. “I think that taking a second to slow down on certain parts of life to really be able to focus on others has been beneficial in some ways.”

While Young has adapted to teaching at a new school virtually, many students, Westelius included, miss the special experience that is found only with in-person singing.

“I would like for us to be able to gather [in-person] at some point because when you sing a good song, you do it well and you’re in a room, the audio is 3D — it’s a really different experience,” Westelius said. “I just hope that we get to do that like at least a couple times. It might get a bit boring having everything be online. But, in terms of actual learning, if you are willing to put a bit of effort in on your own, I think even online, you’ll get a lot out of it.”

While Young has taken an optimistic perspective on the current situation, she says she continues to eagerly await the day when schools reopen and classes meet in person.

“I’m so looking forward to being in the classroom and us all being able to sing together at the same time,” Young said. “It’s going to be a very emotional day for all of us, I think, when we finally get to be back together and we get to make music together again.”