Facing my fear of humiliating myself through Bhangra 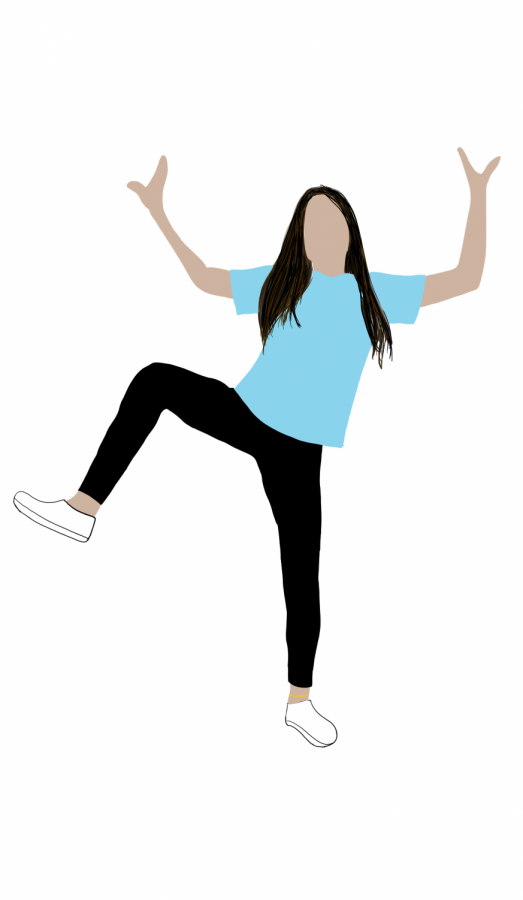 Every Sunday morning for three years, in a small building behind a townhome complex in Mountain View, I learned how to dance alongside 15 other girls. Our teacher, a middle-aged woman with a tight braid that trailed down her back and a severe stare would teach us the ancient art form of Kathak. From 9 a.m. to 12 a.m. in the sweltering heat of the afternoon, she worked our bodies, minds and souls — her only aim to transform a group of ungainly 12-year-olds into graceful, poised dancers.

I hated the feeling of the 150 ghungroos, or bells, on each of my feet, weighing me down and making it almost impossible to move. I hated how the only sounds were of feet slapping the hardwood floors, bells jingling loudly as we moved and music playing that was older than my grandparents. The only thing that drowned out the sound of the bells was my teachers voice, screaming at us to “Move faster, spin better, smile.”

Needless to say, at the end of seventh grade, when it came time to choose between dance or soccer, my choice was a no brainer. From those three years, the only thing I really learned aside from good posture was that I don’t dance.

But, this month, with the crippling promise I made to myself to be brave looming over my head, I thought to myself, “Why not try again?”.

So I decided to tryout for Bhangra one day in Spanish after spontaneously listening to announcements advertising various foods for various clubs. The first workshop was announced for that upcoming Friday along with the promise of free samosas, and I made the decision to attend at least one workshop.

That Friday after school, with the crippling weight of my fear of humiliation sitting in my stomach, I made my way over to tryouts. 40 people crowded around the student union under the afternoon heat as the captains promptly began a quick performance of the expected routine. Within seconds, I knew I’d made a mistake. I watched them smile and radiate the entire space around them with hyped-up energy, and in spite of the immense positivity around me, the only thing I could think to myself was that “There’s no way I’m going to be able to do that.”

The captains started to teach us the routine shortly after, and my stress was palpable. I mentally chastised myself each time I didn’t get a step or accidentally danced off beat. However, to my surprise and despite my constant self-critique, I couldn’t help but enjoy myself. I found myself smiling without having to be told to and dancing with my full energy despite my fear of looking stupid.

Two weeks later, after several FaceTime calls with my partner and even more spontaneous practice sessions, I stood at the steps of the E Building, waiting for my turn to tryout. The captains called my name and as I walked up the steps, the only thing I could think to myself was: “I don’t dance. Why did I do this? I. Don’t. Dance.”

I won’t lie and say that as soon as the music started, the fear evaporated and I put on the best show of my life. I wouldn’t even be able to tell you if I messed up; I was so stressed that the only thing I could think to do was smile. But, as I walked down those steps a measly two minutes later, the thought of knowing that I’d done something that pushed me so far out of my comfort zone was downright empowering.

The next day, I checked my phone right after my soccer game and I saw a notification from MV Bhangra that said “Congrats!” in the subject line. And my first, genuine reaction was to scream really loudly right there in the middle of the soccer field.

But no matter what the outcome had been, I would have been extremely proud of myself. I faced my fear of humiliation and I tried to do something that I’ve been telling myself that I couldn’t do since I was 12. I got really close to my partner, I made new friends and I learned that I can have fun while doing something that terrifies me. Nonetheless, ecstatic doesn’t even begin to describe my feelings for making the team.

And I haven’t stopped dancing in the mirror since.