The silver lining of the Coronavirus

Environmental changes have become unforeseen positives of the pandemic 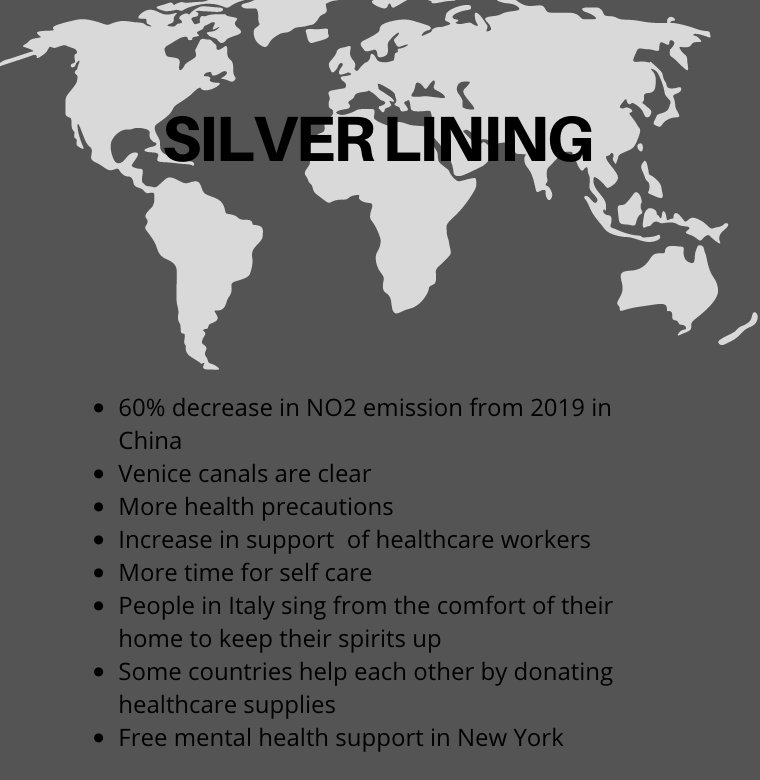 We stare at the same four walls every single day. For most of us, the days are blurring into one big blob of various Zoom calls with our peers, Netflix shows and maybe the For You page on Tik Tok. We know what it feels like scrolling through social media for hours on end and seeing the same challenges like the #untiltomorrow or #finoadomani on Instagram, which were made to entertain us while we’re stuck at home. But it’s been difficult, to say the least. Not just the boredom, but knowing that almost every hour another couple of thousands of deaths are announced somewhere in the world from this pandemic.

Deaths are rising to thousands per week. Schools have closed. Hospitals have become overcrowded.

For us, it looks like there’s no light at the end of the tunnel. But that’s where we are wrong.

The rise of knowledge about the coronavirus has led to China placing a ban on the trade and consumption of wild animals. Although the Center for Disease Control and Prevention stated that there still is no evidence of the exact source of this virus, person to person contact is more likely to spread this virus. The first reports of the virus have come from Wuhan, China where many wild animals like bats and dogs were put on display and sold to customers for their consumption. Sadly, the ban of the wet animal markets is currently inactive and many markets have reopened and started selling exotic animals once more. However, many more people have become more educated on the topic of health and are trying to use social media to express the importance of a new and more permanent ban on exotic animal markets or have the government regulate the markets more closely.

This is the problem we've been talking about since beginning of #COVID19. Huge demand for wildlife as food & traditional medicine in China/globally. People will be reluctant to change habits. Different approach is needed…https://t.co/emjxyvRm3i

Another one of our society’s looming threats is climate change. However, with the measures taken to protect us from COVID-19 (coronavirus), there have been unintended benefits that are helping our planet.

According to Descartes Labs, there has been a massive decline of NO2 concentrations in China this year with about a 60% drop from the prior year. The NO2 that is emitted into the air stems from human activity like industrial work and the burning of fossil fuels, which can lead to smog and acid rain. Long term exposure to air pollution and NO2 can lead to respiratory diseases such as lung cancer or short term effects like pneumonia.

This reduction of pollution has not only been seen in China but also in places around the world such as South Korea, Italy, Los Angeles and New York. Due to social distancing policies, many people across the globe have begun working from home, resulting in a dramatic decline in the number of people using fuelled vehicles. This is seen in Venice, Italy, where the canals have almost completely cleared due to the lack of boat activity and locals have spotted the return of swans and fish.

😳 😳 😳 #venice
An unexpected side effect of the pandemic: 💧Water's flowing through the canals of Venice is clear for the first time in forever.
🐟 🦢 The fish are visible, the swans returned pic.twitter.com/crWf4kdZ1M

We hope that this pandemic can educate people to become more reliant on science and that whatever future problems that are thrown at us can be resolved more efficiently. Our new knowledge about effectively washing our hands may sound silly, but that 20 seconds is making us more aware of germs and doing our part in the community.  We will see each other soon at school or in the community once this global crisis is over, but without everyone contributing their part to help stop the spread, we won’t be able to ever recover.

As everyone around the globe scurries to isolate themselves from the outside, we can see this as a small win amid the negativity that seems to dominate our lives in this global emergency. So it’s not just you versus the virus. It’s all of us. We are a united front.