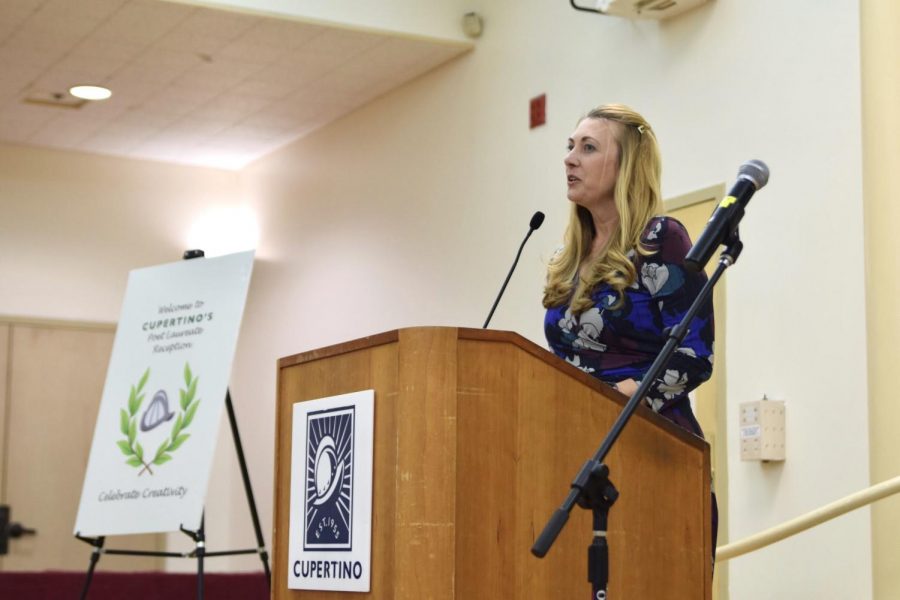 Anthology editor and former Cupertino poet laureate Kaecey McCormick gives a speech recapping her experiences teaching workshops, judging contests and hosting readings. Instead of having the traditional poetry contest, McCormick decided to celebrate the end of her two-year term by publishing the anthology.

Before she began her two-year term as Cupertino Poet Laureate (CPL) in 2018, poet Kaecey McCormick had a vision for a city-wide poetry project. As she sat in on a poetry workshop held by Ann Muto, the previous CPL from 2016 to 2018, McCormick admired the bravery of her fellow writers who shared early drafts of their poems and courageously told their stories.

When she eventually earned the position, McCormick held onto the passion she experienced from her peers and hoped to foster the same spirit from that workshop in her term as poet laureate. While many previous poet laureates had hosted poetry contests near the end of their terms, McCormick looked for a different way to leave a legacy: an anthology — a collection of the works of multiple people — exclusive to the Cupertino community titled “Celebrate Creativity.”

“I remember sitting there [in the workshop] thinking, I wish I could bottle up all the voices of Cupertino and bring them home with me,” McCormick said. “And so when I became [CPL], I had that memory with me. And I knew right away, I would rather have an anthology that collected the voices of the people that live here and tell their story. Rather than have a contest, which sort of sets them against each other, this would be a place where everybody could come together.”

The process of creating the anthology turned out to be much more work than McCormick had initially expected. She envisioned that the anthology would feature around 15 to 20 contributors’ works, resulting in a pamphlet with around 60 pages of prose and poetry. However, McCormick was “overjoyed” by the amount of passion the Cupertino community revealed through its submissions — the collection eventually filled over 350 pages with works written by over 80 contributors. McCormick believes that the anthology’s impact is two-fold; not only will it validate contributors and allow them to publish their own work, it will reinforce the importance of art in an area McCormick finds is very STEM-oriented.

“I like to think of creativity as cross-training for the brain,” McCormick said. “And so if people were to engage more in activities of poetry and prose and writing, they’re outside of their comfort zone, [and] it helps them in other endeavors, whether that’s engineering, medicine, doesn’t really matter. It’s all working together to strengthen your brain in those connections. And I hope that in some small way this anthology contributes to that.”

The anthology features a variety of voices, ranging from those of elementary school children to senior residents. Former Santa Clara County poet laureates have their work in the anthology, and both professionals and amateurs alike have contributed to the collection. The anthology encapsulates stories ranging from anecdotes of baking cookies with grandchildren to moving away from a previous home. Below are the stories of several anthology contributors hailing from unique backgrounds.

Senior Nathan Lee believes that discovering one’s own identity is challenging for everyone. For him specifically, writing allows him to express his transgender identity. Lee enjoys writing poetry in particular, as it allows him to understand himself through the process of creating a piece of writing. In his poetry, Lee often touches on the concepts of names and water because he finds that these concepts often occupy his headspace. In fact, Lee has written a series of poems regarding months, tailoring one poem to each month of the year.

“You’re always challenging your assumptions of yourself,” Lee said. “And I think poetry is a good way to do that because you’re always asking yourself questions, you’re always saying, ‘This is my perception of the world. And this is how I infer meaning from it.’ I didn’t actually start writing poetry until recently, but that’s why I think it’s been a vehicle that stuck with me.”

Lee finds that sharing the art of writing is especially important in Cupertino, as he finds the humanities are often underappreciated in the area. He hopes that the anthology can break expectations and stereotypes associated with the demographic of the city.

“I think there was a Dead Poets Society quote that’s like, ‘Yeah, science, math…it runs the world,’” Lee said. “But poetry and art and music is what the world runs on. Humanities are important for you to live as a person and not just survive.”

For Katerine Escobar, the Cupertino poetry anthology has given her her first opportunity to publish her own piece of writing. Escobar currently takes high school-level classes as an adult, and one of her teachers recommended encouraging her to submit her work after seeing her writing style.

To Escobar, writing serves as a good outlet for self-expression. She often finds that there are many ideas she can’t voice out loud, but she finds a different feeling when writing her ideas on paper. Escobar centered her prose submission on her father, who passed away when she was a child.

“I’m really proud and my whole family is really proud too,” Escobar said. “It’s dedicated to my dad, who passed away. Everyone is really happy to see my name and his name on it.”

Sundeep Kohli was encouraged by his friend and fellow poet to submit his work for the anthology. Kohli writes poetry in Hindi and Urdu, so his submission for the anthology was translated into English. His poem is about the beauty of nature and how it is difficult to resist the temptation of falling in love with it. Kohli describes poetry as “intoxication, love and passion.”

Poetry is an essential part of Kohli’s life. He says that “after breathing, I think one of the most important things for me is to read poetry.” He uses poetry as a medium to show the conversation between people and nature, and hopes that his poem will impact each reader in a new way.

“A nice poem, according to me, is something which has a different meaning for different people,” Kohli said. “It’s very dynamic, it evolves. I understand one thing about poetry: once you have written a poem, it has its own life. It depends on the people who read it and what they want to take from it.”

When writing poetry, Kohli is inspired by his favorite verse from a Hindi poem: “from the earth to the heavens, there’s so many beautiful objects lying around in this universe. It’s very hard for the painter not to fall in love with one of them.”

Edith Barr began to write poetry when she was in elementary school. When she entered college, she continued to write some poetry, but several years after graduating from college, she stopped writing poems altogether. However, in 2017, Barr discovered and attended workshops hosted by former CPL Ann Muto in the Cupertino Library, reigniting her joy of poetry.

“One of the things that poetry does for me is it gives me a way of expressing something that I might’ve felt before but didn’t have words for,” Barr said. “There’s something about poetry, like the form and the rhythm, where if sometimes I can put something into words, I’m like ‘yes, that fits.’”

Barr describes the process of writing poetry as a form of remaining present in the world. She compares it to meditation, which she believes requires getting in touch with oneself beyond simply going through the routines of day-to-day life. Barr is grateful for McCormick’s effort in creating an anthology which can capture these works of writing from people all over Cupertino.

“I haven’t really absorbed it yet, but I know she put an incredible amount of work in it,” Barr said. “It’s also wonderful that she took an idea and turned it into something that makes such a difference to so many people. There’s 80 people now who have had their poems published in this anthology and that’s really something that wouldn’t have happened without [McCormick].”

Having written over 200 poems, Milan Bhardwaj was one of the anthology’s more experienced contributors. Though she was invited to submit five pieces, she entered two: “The Bread of Life”, a philosophical comparison between the rising of bread and spirit, and “Rearview Window,” a look back at hardships she has endured in her life

“I talk about how life itself is like a journey in a way,” Bhardwaj said. “And I’ve been through so much, but then I look through it in my rearview mirror, and I feel very blessed. I feel as if my weight was stamped with a stamp saying ‘Fragile — Handle with Care’ and God sees all of us through the most difficult moments of our life.”

Bhardwaj gives credit to McCormick for putting the anthology together and allowing like-minded poets to converge into one work. While she particularly enjoys the outreach that comes from the variety of opinions present in the book, she herself doesn’t feel a need to share her work with others.

“In the anthology, since there are so many pieces and from such a diverse group of people, and a large number, I’m sure there’ll be something to appeal to anybody,” Bhardwaj said. “But as far as my work is concerned, there’s no hope. Because when you write, the joy’s in the act of creation. When a poet writes, it becomes inspiration, and that itself is satisfying.”