Catching up with Music Theory Club

Music Theory Club and their plans after their first performance 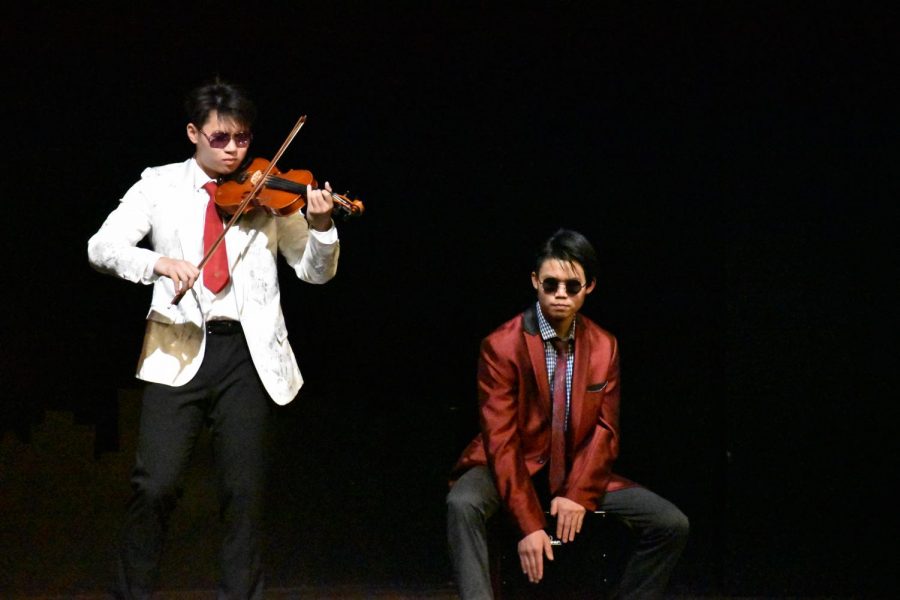 MV Music Theory Club was formed in the second semester of last school year from an idea that junior Eric Zheng had of teaching and bonding with others over one of his passions — music. Having been interested in composition starting freshman year and playing piano most of his life, Zheng has had experience with arranging and performing music. With the Music Theory club, Zheng wanted to share the knowledge he gained over the years of composing, arranging and music theory with a group to perform with.

“You listen to a song and you’re like, ‘Oh, I really want to play this song, but I have no idea how to play it,’” Zheng said. “A lot of times online, either you have to pay for the sheet music or it’s pretty boring. And so I thought to myself instead, why not just make my own music? So I started arranging music and then eventually a lot of my friends thought it was really cool and [wanted] to play together sometime. And so I made this club so we can have a place to play together and perform.”

Most recently, Zheng has made an original arrangement piece to BTS’s song “On,” which he recorded and posted to SoundCloud. Along with the recording, he wrote and published the sheet music for both the violin and the piano to follow along with. Zheng says arranging music is a completely separate task than composing music — arrangement is taking a piece of music and making it your own, whereas composing is writing music from scratch.

During most meetings, which are held in the Choir’s mirror room on Thursdays during lunch, the six officers present lectures on various music-related topics — some topics being composers in the movie industry, demonstrations of differences in Western and Eastern music and other basic information on conducting.

Junior and Vice President Bryan Zhu say the first year has been focused on understanding the logistics of running a club, as it is the first club for some of the officers to form a student-run group. They use their Facebook Messenger group to communicate with their 15 to 20 members and where Zhu posts discussion prompts before meetings.

“I think at the beginning, there was a bit of a rough start trying to get a club off the ground and we didn’t really know what to do — all the meeting minutes and logistics,” Zhu said. “After we got the foundations [and] knew how things went, I think it’s been pretty smooth. We always kind of had a plan of what we had to do each meeting. ‘Are we going to rehearse? Or are we going to discuss potential future and musical exploits or stuff like that?’”

During the initial few meetings this year, Zhu was planning for performances they could participate in, but says he couldn’t find many opportunities for Music Theory to be a part of. By the end of the second semester, Zhu saw an opportunity in performing for MV Saturday Night Live’s (MVSNL) halftime show, as the previous band who has performed the past few years graduated last year. After being in discussion with the Drama department, they reserved their slot in the MVSNL schedule for Feb. 17 and 18.

“I thought it was just a great opportunity to show everyone that our club existed and that we would have a product that we could be proud of, and [could] work towards this product as a goal to then just show off what we got,” Zhu said. “Overall, I think it was a really great experience for our group because we got to bond a little bit — we formed a more cohesive group. And then we got to play on stage for other people. Especially with an audience for MVSNL, it’s not an audience for students and people who are the same age as you and [who are] also probably interested in the same music as you.”

In preparation for their first performance of the year — which Zhu and Zheng consider as their club’s debut — they met during lunches and at either of their homes to practice in the month leading up. They performed three pieces — “Senorita,” by Camila Cabello and Shawn Mendes, “The Greatest Show,” from The Greatest Showman and finished with “Epiphany,” by BTS. Zheng and Zhu both played violin and piano, switching positions mid-way through “The Greatest Show,” while junior and Vice President Daniel Kao played cajon.

Kao says he picked up how to play the cajon in preparation for the show within the month, as they were strategic with what instruments would be needed in the show and also why not everyone in the club performed — only the three officers.

“I played the cajon [because] we had to change a little bit of things, because of instrument availability,” Kao said. “But we ended up working out pretty well because most of the pieces that we were doing had a lot of percussion … We actually changed our repertoire I think about two times. We were originally going to do ‘Africa’ by Toto. I was super stoked to do that, but it’s a really hard piece. We’ll need more instruments for that, like a saxophone or something.”

The three officers decided to do one more thing in preparation for MVSNL and future performances  — creating the group OvtaTvn. Pronounced “out of tune,” Zhu says it is just a different name and the band is not separate from the club.

“The hardest part about forming our group was coming up with a name, and we gave ourselves the name,” Zhu says. “We didn’t separate from our club because we really wanted to, but we decided that it was more like going up on stage we didn’t want to be introduced as Music Theory, and we decided to give ourselves a name and it just ended up as being a sort of small band.”

Similar to the recording of Zheng’s rearrangement of “On,” the club also records their covers of pieces they may work on during meetings. During OvtaTvn’s first meeting for MVSNL, Kao proposed the idea of performing “Senorita” and the group posted a recording of it. They also recorded a cover of “Epiphany” during a later rehearsal.

“The most memorable moment was probably when we recorded Senorita kind of on a whim just for fun over winter break,” Zheng said. “I didn’t know how we would sound because I didn’t think we were that good, but when we started recording and then I heard it, it was pretty good. It’s supposed to be a guitar, we used a violin instead of a guitar and so we plucked the strings, and it sounded really nice. It was amazing and we recorded a couple more together. I think that’s probably a really memorable experience.”

MV Music Theory’s future plans lay in a performance at a senior center and are currently working on a few pieces to learn with OvtaTvn. Zhu expects OvtaTvn and their club to expand as they book more events and work on more pieces by the next school year. Kao says that having a club like Music Theory and being able to perform now with OvtaTvn is valuable to him, just as much as his 11 years of playing the piano because of the connections he has made with fellow members and the school.

“We always like school performances because you can support the school and make it a little more fun,” Kao said. “SNL is one of the only school performances where anybody can join it. Like drama has their own performances, but that’s for drama … So that worked out perfectly for us because we’re our own kind of music group, — we’re not part of a band or anything and we kind of do our own thing with our club.”