Pack Your Own Lunch Day 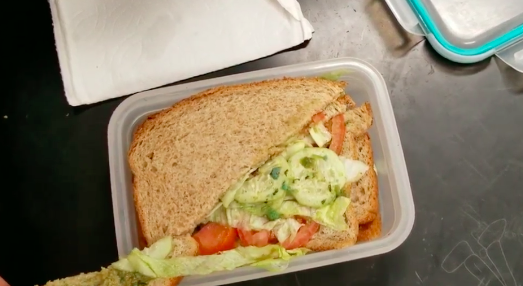 According to Ph.D. Carolyn Williams, students who pack their own lunches have been reported to experience various benefits, including healthier meal planning and less food waste. Packing lunch often allows students to be more conscious about the type of foods students consume and how much of it they throw away. Yet students Ojas Karnavat, Elizabeth Lee, Matvey Jenssen, and Shikhar Gupta believe that MVHS hosts a culture of relying on parents or the school cafeteria for lunch.

At MVHS, students can purchase lunch with fresh salads and varying meals for $4.50. Freshman Shikhar Gupta believes many students don’t purchase school lunch because of the price.

“A lot of Indian people are definitely pennywise and $4.00 is [very] expensive for lunch,” Gupta said. “If someone in your family is already making lunch, then why waste money?”

Gupta, however, does not pack his own lunch and believes that many other MVHS students do not either. He believes it to be part of a larger issue about prioritizing sleep, over packing lunches.

“[Students] wake up late and don’t find time for packing their lunch,” Gupta said. “[That’s why] I think most people at Monta Vista don’t pack their lunch.”

Sophomore Ojas Karnavat packs his own lunch and speculates the tradition of giving parents the responsibility of preparing lunch is based on traditional familial values.

“I think [packing your lunch] varies from family to family,” Karnavat said. “My parents have this view of, when you are growing before 18 [years old], you need a ton of energy, so they always make sure [I] have had something [to eat].”

In many cultures, parents are given the responsibility of making sure their child eats something or eats in a certain way. For Karnavat, his parents want to make sure he eats something every day at school.

“I didn’t eat anything [at school one day].” Karnavat said. “I went home and [my parents] said, ‘You should have told us first thing when you came back!’”

In some cultures, packing lunches is a child’s responsibility, and sophomore Matvey Jenssen states that in Germany, students pack their lunch because of a lack of alternative options.

“In my nation [packing lunch] is a cultural thing,” Jenssen said. “[Being] from Germany, not every school has [cafeterias and] lunch lines so it is important to bring your own lunch.”

At MVHS, Jenssen often lets his parents pack his lunch, but chooses to pack his own lunch on days when he wants to eat healthier foods.

For junior Elizabeth Lee’s family, part of why her parents pack students’ lunches is to make sure their child has something to eat during the day. She believes that students’ busy schedules often make it difficult to plan meals themselves.

“My mom used to pack very traditional Korean food like rice and side dishes, [but] I got busier in high school, so I asked for [meals that are] easier to eat, faster [and] more Americanized foods,” Lee said.

In Cupertino, over 50% of parents are foreign-born, meaning they bring their cultural foods and values with them from around the globe. For Lee’s parents, the change from Korean foods to American foods is different from their own cultural values. In the same way, being okay with skipping lunch is different from Lee’s generation and her parents.

“[My mom] gets mad if I skip lunch [because] she thinks that we can’t study if we don’t eat,” Lee said. “[But] I think she understands now, more than last year, how busy I am during lunch.”