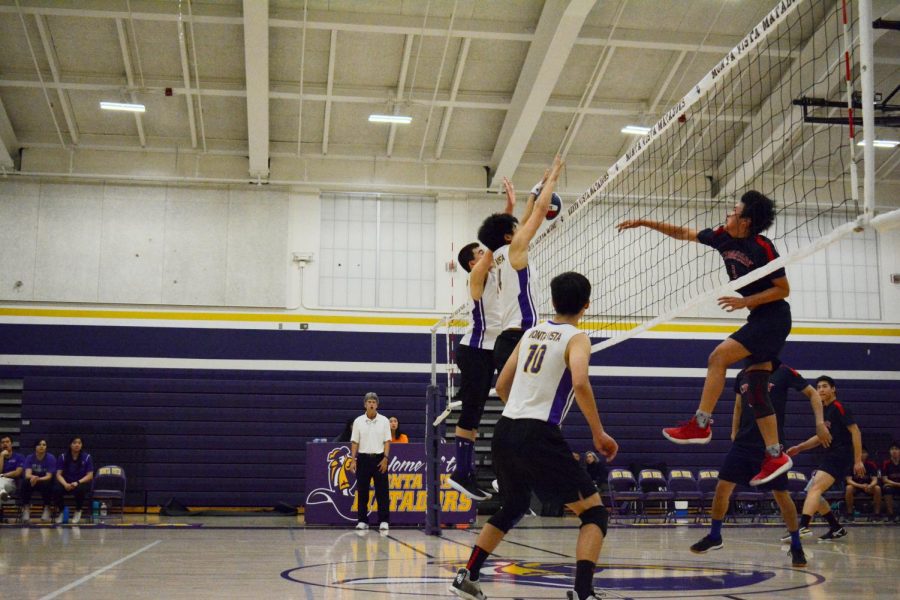 Senior Daniel Chang and junior Brandon Ng successfully block a spike by a Lynbrook HS player. The duo amounted for multiple blocks during the game.

The MVHS boys volleyball team, who hasn’t played a game since its Norcal championship win last season, defeated Lynbrook HS (LHS) at its first home game of the season. The team won in straight sets, starting the new season off strong with a current league standing at 1-0.

The first game of the season led to a new lineup consisting of juniors Tyler Cho and Brandon Ng, seniors Matthew Yang, Daniel Chang, Willy Liou and Charlie Yi. However, during the game Yang performed an ace in the third set, causing the score to become 21-18. The ace was a catalyst for the rest of the set and the team was able to end the third set with a score of 25-18.

“We were kind of nervous knowing that it was our first game and also knowing we were missing a lot of our star players from last year to a new starting lineup, but we knew that we had the potential to play well,” Yang said.

Yang believes that with less hitting errors and learning how “to terminate the ball better” will lead to more highlights in future games. However, throughout the game there was high intensity with multiple blocks and strikes from almost every athlete on the court.

“Our hitting and serving was, you know, we gotta do better, we get away with it against teams like this but against upper teams it’s just not going to work,” Chiu said.

In its first home game of the season, MVHS boys volleyball won in straight sets against Lynbrook HS with set scores of 25-17, 25-20 and 25-18. The Matadors are currently on a 32 game winning streak, having not lost a game since the 2019 preseason. Photos by Elena Khan and Anish Vasudevan