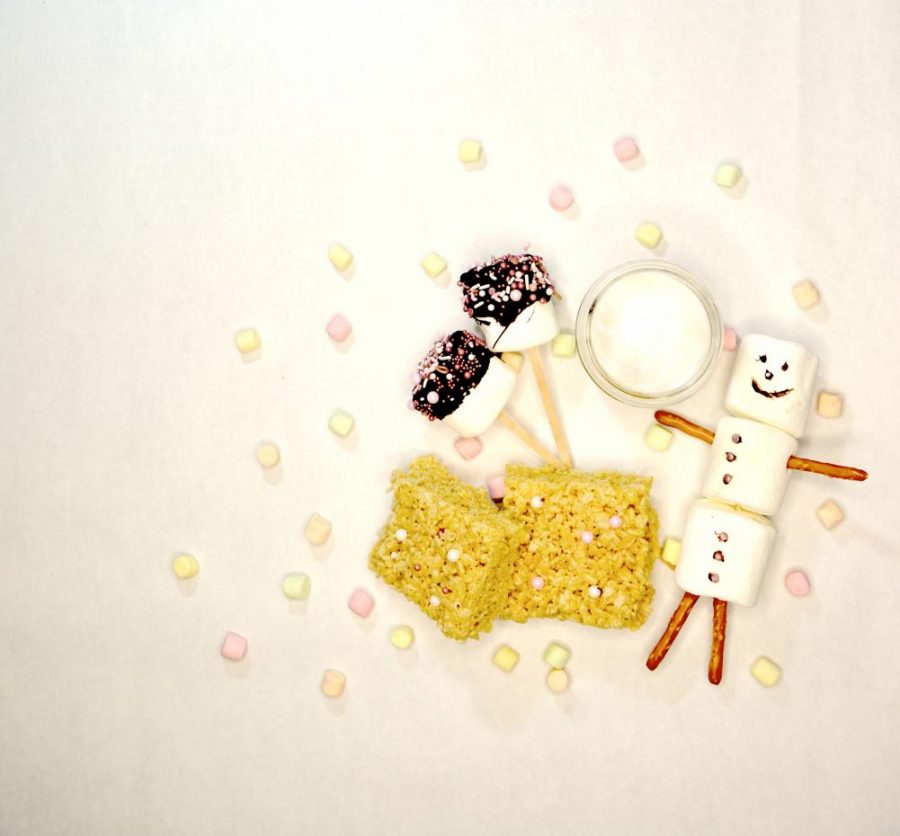 Marshmallows are a hallmark of winter — a soft and squishy delicacy that many enjoy, whether it’s marshmallows alone or with a classic treat like hot cocoa. Aside from these typical marshmallow uses, here are some additional unique ways to enjoy marshmallows.

Puncture the marshmallows with the lollipop sticks and set aside.
Boil water in a large pot and place a large glass bowl over the pot, making sure the bowl avoids touching the surface of the water. Pour chocolate chunks in a glass bowl, stirring until completely melted with no lumps.
For an alternative way to step 2, use a heat-proof bowl and microwave the chunks, stirring at 30-second intervals until the chocolate is completely melted. Be careful not to burn it.
Dip half the marshmallows into the melted chocolate, letting the excess drip off. Then sprinkle them with the candy decorations of choice before the chocolate completely hardens.
Use a bowl filled with rice or a block of styrofoam to position the marshmallow pops upright to dry until the chocolate has fully hardened.

Melt butter in a large saucepan over low heat.
Add marshmallows and stir until melted and well-blended. Cook for two more minutes, stirring constantly. Remove from heat.
Add the cereal and stir until it is well coated with the melted marshmallows.
Using a buttered spatula or wax paper, press mixture evenly and firmly in buttered 13×9-inch pan. Cut into 2×2-inch squares when cool.

Combine marshmallow root, coconut oil and avocado oil into a jar and slow cook in a water bath for a few hours.
Set a heat-proof glass jar into a pot of simmering water on the stovetop for 45 to 60 minutes — watching carefully and ensuring the herbal oil doesn’t fry the herbs.
Strain the oil using a cheesecloth, then compost the marshmallow root.
Add the aloe vera to the strained oil — if the aloe is fresh from the plant, use an immersion blender to puree it.
Add the melted shea butter and essential oils. Pour into a bowl and pop it into a freezer until it’s set.
Whip at full speed for several minutes until the mixture is creamy and fluffy in texture.

Skewer three marshmallows with a pretzel stick so they are all connected.
Break additional sticks into desired lengths to create feet and hands.
Skewer the bottom marshmallow with two sticks for legs. Skewer the middle marshmallow on either side to create hands.
Dip a toothpick in melted chocolate and create eyes, nose and mouth as well as any other desired decorations.