After an intense match, the Matadors gain their sixth overall win with a final score of 4-2 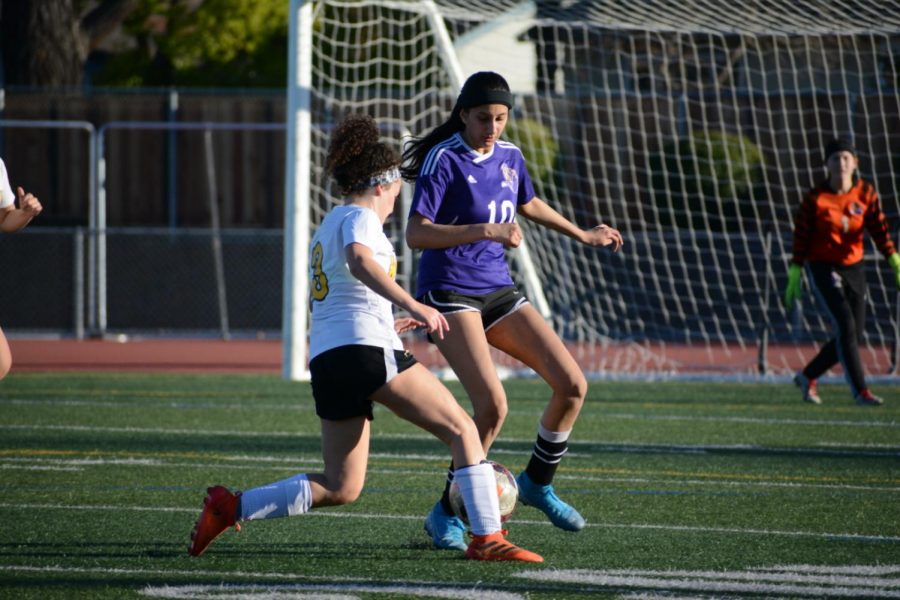 Junior Samiksha Rao attempts to bypass a WHS defender in the first half of the match despite their intense offensive plays. Junior Shriya Kaushik takes note on WHS' playing strategies during today's match especially. "WHS had a few really strong players that had a lot of muscle, they were very aggressive, and they were very technical, especially the midfielder," Kaushik said. "But we were able to shut her down easily when we worked together as a team." Photo by Collin Qian

fter scoring a tied game against Cupertino HS on Wednesday, the Matadors faced Wilcox HS on Feb. 7 in order to advance further on the leaderboard. After an intense match with strong defensive plays from both teams and numerous close shot attempts, the Matadors beat WHS and they currently stand just behind Gunn HS, which is the first place team in the Santa Clara Valley Athletic League (SVAL).

The Matadors took note of the way WHS plays from previous matches in hopes of better preparing themselves for the potential high intensity game. Specifically, junior Viveka Ramanathan felt nervous before the match due to numerous factors.

The game had commenced with strong plays from both teams, which led to back-and-forth movement but no team successfully controlled the ball. Despite this, senior Stuti Upadhyay managed to score the Matadors’ first point of the match with a strong kick from half field. Shortly after, WHS surpassed a MVHS defender and scored a point to tie the game — the match proceeded to ended with a score at 1-1 into the second half.

The Matadors quickly started the second half with junior Lauren Ruckstuhl driving down the field and scoring a strong goal. Shortly after, a follow up goal took place which brought up the Matadors’ lead to 3-1. With this newly established gain, WHS increased the tension on the field and began to fight back offensively, which allowed them to bring up the score to 3-2. As the game began to slowly end, freshman Allison Kyutoko scored another point for the Matadors, surpassing their competitive offensive attacks and the Matadors eventually beat WHS with a final score of 4-2.

Despite the win for the Matadors, Ramanathan believes that the team can still improve on many individual and overall team skills that will hopefully help them excel in future games.