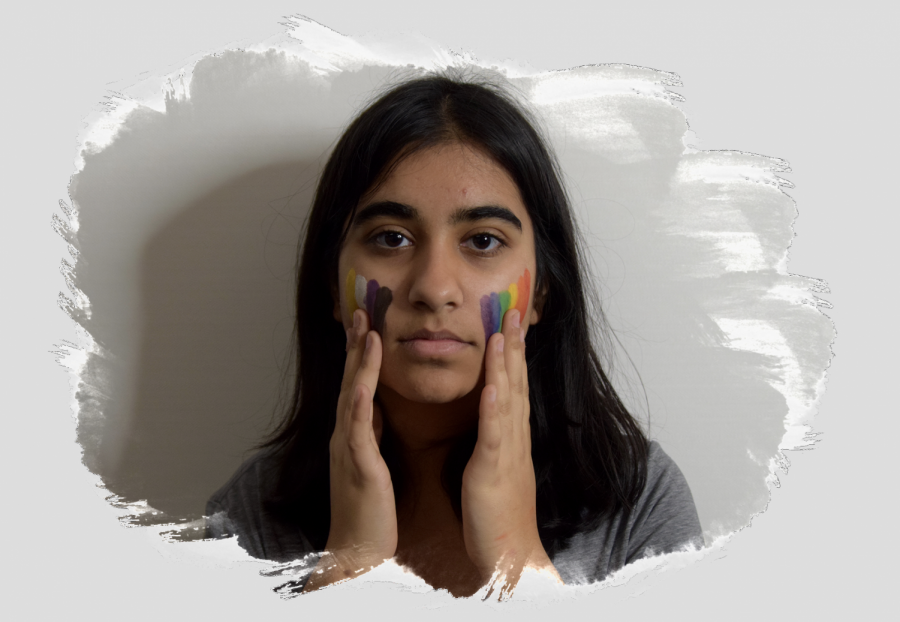 Sophomore Anika Sharma drags face paint down their face, using the colors of the non-binary and LGBTQ flags.

Student X is anonymous in order to protect their identity.

In April of 2019, Congresswoman Pramila Jayapal disclosed that her child is “gender-non comforting” and uses “they” as their pronoun. American singer Sam Smith announced in September that they prefer to use “they/them” as their personal pronouns. With these announcements, alongside the increase in word searches by 313% in 2019 from the previous year, Merriam-Webster selected the word “they” as the 2019 word of the year. According to Merriam-Webster, there was a lack of a singular, gender-neutral pronoun, and consequently, “‘they’ has been used for this purpose for over 600 years.” In light of recent years, “they” has also been used to refer to individuals whose gender identity is not binary, which is why the definition was added to the dictionary’s online database in September of 2019.

Through the word of the year, “they” is being highlighted today. For sophomore Anika Sharma, the word “they” is more than a pronoun — it makes up an integral aspect of their identity. 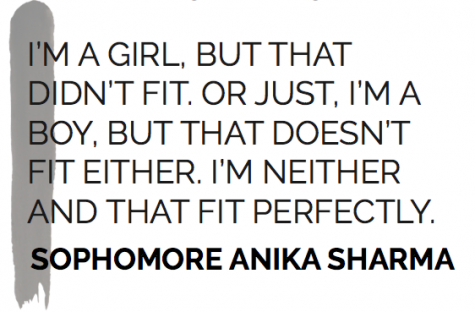 In kindergarten, Sharma remembers going to school clothed in the boys’ uniform and getting tugged to the boys’ line, which made them question what it means to be a girl. Looking in the mirror, they developed questions: Was it the long hair? Was it because everyone — their parents and society — told them that they were girl?

They felt a sense of familiarity when they were first introduced to gender terminology in their freshman biology class, specifically for the term “agender” — someone who does not identify themself as a specific gender. Coming to a revelation, Sharma turned to their elbow partner and said, “Oh my god, that might be me.”

“Honestly, I was confused and scared because it’s a big thing to happen,” Sharma said. “It was like something hit me in the face and it was just a shock. I couldn’t function for a good five minutes. I asked questions like, ‘Is it okay to be agender? What pronouns do I [use]? Can I still be a feminist and be agender?’”

Feeling unsatisfied with their gender by birth, Student X, who also uses they/them pronouns, had been experiencing episodes of gender dysphoria (a state of uncertainty where an individual’s biological sex doesn’t match their gender identity) since the beginning of the 2019 school year. Initially, they were in denial, as they had previously identified themself as a cisgender girl. After speculating about their gender identity, undergoing severe episodes of gender dysphoria and consulting a friend, Student X decided to experiment with different pronouns. According to Student X, as soon as their friend suggested that they “try something different,” outstepping the binary “just felt a lot more right than anything else that [they] thought of before.”

“I decided to mess around with my pronouns and because I’m gender fluid, my pronouns change by day,” Student X said. “Generally they/them is just the best way to describe me because some days she/her just doesn’t work and some days he/him doesn’t work. I think that ‘they’ is really great because it’s all encompassing — you can use it to refer to anybody.”

Due to not being out to their parents, Student X turns to their close friends for reassurance. Whenever Student X finds themself in an episode of gender confusion or whenever they quarrel with their parents about their identity preferences, they find solace in venting online to their friends.

“If I felt like there wasn’t anybody for me to really talk to, I think it would’ve been a lot more difficult because obviously there are people who have issues with me and I think that it would be a lot tougher if I didn’t have somebody to really support me and to follow through on who I am,” Student X said. “I think I probably still would’ve been in the closet because I wouldn’t really have realized [my gender identity] yet.”

Likewise, Sharma was able to draw support from their friends and teachers, including math teacher Jeff Payne. After class on the first day of sophomore year, Sharma spontaneously sought consolation with Payne, con ding in him about their gender preference. Payne was the third adult Sharma disclosed their gender neutrality to at the time — the other two being their parents. With this, Sharma wasn’t sure what to expect from Payne.

“When I went to [Mr. Payne] to tell him after class, my legs were shaking, my heart was beating out my chest, my breathing was ragged. I was lightheaded and dizzy [and] my voice was raspy — it was dry,” Sharma said. “I told him, and he was just like, ‘Okay, cool. What can I do to make you feel more comfortable?’ I almost cried because I was so relieved.”

Payne explains that he was thankful and appreciated Sharma coming to talk to him about what pronouns they prefer to use. He also notes that he tries to be more aware of what he says in class.

“I try not to use general, traditional gender words, such as ‘ladies and gentlemen,’ things like that,” Payne said. “I’m just trying to be a little more mindful of that. I don’t know if I’m perfect because it’s old habits, but I try my best.”

Although Sharma has not changed anything about themself physically, they would like to cut their hair shorter and possibly get a chest binder.

While realizing their “true gender identity,” Student X also experienced physical dysphoria in respect to attire. After reaching a consensus with themself, they wanted to express themself more androgynously. Accompanied by their friends, as their parents didn’t want to purchase androgynous clothing for them, Student X went on a Goodwill shopping spree and swapped their feminine apparel — off the shoulder tops, crop tops and tube tops — with boys clothing. 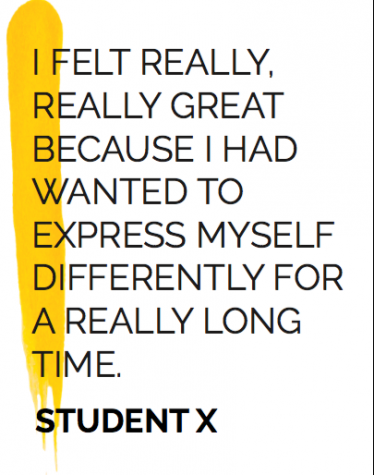 “I felt really, really great because I had wanted to express myself differently for a really long time,” Student X said. “That was really important because it helped me realize that this does make me happy and that this is something that I want to be.”

According to Student X, their close friends are still used to referring to them by their former name known as their “dead name” as well as she/her pronouns, which Student X believes is “a little bit annoying.”

Student X has to correct such mislabelling and, as a result, feels “extra demanding” at times. With these instances, Student X occasionally doubts their choice in expressing their gender.

“[At times], I think, ‘Maybe this is not really what my gender is and maybe I’m just a [cisgender] girl and maybe I should just stop with the whole pronouns thing,’” Student X said. “I feel like sometimes I’m worried that it’s kind of annoying to other people. Obviously I know that those are my pronouns and other people should not have an issue with it because it’s my identity.”

Student X believes that the word of the year is “absolutely awesome” and that it serves to elevate queer representation.

“I think the fact that Merriam-Webster, which is a well known company, chose to recognize that as their word of the year really helps with spreading awareness and it sort of says the message that non- binary people are here and that they do exist,” Student X said. “[It breaks] the gender binary because obviously ‘they’ goes against the ‘you’re a boy, you’re a girl’ thing.”

Over this past year, Sharma has been greatly impacted by the word “they” and Merriam- Webster’s 2019 word of the year shows them how much support they have.

“I’m really happy about that,” Sharma said. “I’m so thrilled. It just shows that there’s just so much support and even though there are some people who still don’t really support me, for every one person who doesn’t there’s 50 other people who love and support me no matter what.”