The motivation and process behind their gardens 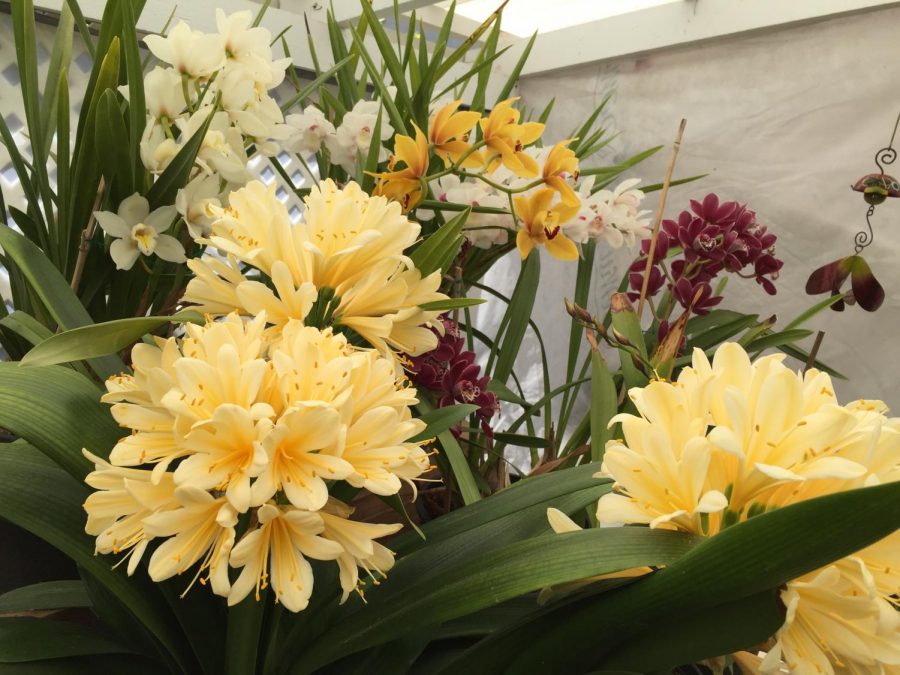 or junior Tanush Talati, a seventh grade visit to a bonsai garden in Washington D.C. sparked his passion for gardening.

“Ever since that, gardening and plants really interested me,” Talati said. “We always had a garden at home ever since I was young, but my interest in maintaining it and expanding it really started after that point.”

Before, Talati’s parents mainly grew flowering and ornamental plants, like roses and tulips, but Talati chose to add fruiting plants, like lemon, avocado and peppers. His family typically uses the flowers to decorate their house and uses the fruits and vegetables to make recipes, like lemonade or spices with the peppers.

Talati feels that one of the most difficult parts of gardening doing so during the winter, due to the weather conditions. Insects and pests also pose a challenge, though one pest in particular came as a surprise.

“One thing that was interesting is the squirrels,” Talati said. “We didn’t really expect them to be a huge factor, but when we had carrots, a lot of the times, they’re dug up. We finally found out there were squirrels digging underneath them and eating the carrots. We didn’t really try to stop them because the carrots were just planted for fun mostly, and so it was just really cool to see other animals.”

Though Talati primarily views gardening as a way to destress, he also enjoys seeing the time and effort he put into it pay off. Some plants, like his family’s peppers and lemon tree, were bought from the store, then planted, but Talati finds it especially rewarding when he sees the whole process of a plant growing.

“For our avocado, we didn’t buy it from somewhere,” Talati said. “It was actually grown from a seed [after we ate the avocado], and I think it’s been a year and a half. It’s really interesting to see it grow from a seed to almost two feet tall now, so it’s something that I’m proud of.”

The summer before he left for college, English teacher David Clarke worked for a landscape architect. The architect would design the plan; his landscaping crew would create it. For three summers, Clarke was part of the landscaping crew, charged with tasks ranging from installing the pipes to putting in the plants.

As Clarke moved to different places with his now wife, they started gardening. He would build; his wife would plant. Their current house was a fixer-upper, so he saw the house itself and their yard as a “blank slate.”

Over the past 20 years, their garden has amassed plants ranging from annuals to flowering perennials, succulents to tropical plants, vegetables to fruit trees (like citrus, nectarine, fig and apple) to 8-foot vines. They don’t have a lawn anymore but “various evolving displays of pots” instead. Clarke says that deciding how to lay out the placement of plants in the garden is a design-oriented process.

“Landscaping really has two phases,” Clarke said. “The first phase is putting in the basic structure. It’s like designing a template for a publication or something like that, which I’ve done too, so you have to design a basic structure and then there’s putting things within that structure, so it’s very creative. There’s a lot of long-term thinking involved. It’s constantly changing.”

The first phase — construction — usually takes place over the summer. Major construction work can take him anywhere from a week to a month. The 12-by-40 foot greenhouse he built, for example, took about four weeks and now stretches along the side of the house.

As for the second maintenance phase, Clarke says that on a good day, when it’s not wet, he and his wife will spend six to eight hours out in the garden. They prune, re-pot and plant. Typically, Clarke handles the heavy labor, while his wife handles the vegetables and annuals.

Clarke has also set up a weather station, which he uses to monitor wind, temperature variation and precipitation, then adjusts accordingly with what the plants need and how he takes care of them.
“I think of [plants] as being sort of like programs in some sense,” Clarke said. “They’re just really complex sort of algorithms and so depending on what you do, they will react in a particular way.”
Clarke finds that growing tropical plants, like lantana and hibiscus, in this Bay Area climate is particularly interesting. In tropical climates, these plants typically flower year-round. In this area, however, Clarke says that they develop a different growing habit.

“What we’ll do with the hibiscus and lantana after the last frost is we just whack them all the way back to the ground,” Clarke said. “They look like they’re dead, and they’ll just come back. It’s constantly just sort of interesting to think about all the different ways that plants have adapted just like animals, adapted to their environment and filled a particular niche. You’re just trying to figure out what that niche is, and adapt it to the environment which you’ve given it.”

Clarke feels gardening rewards patience, as it requires research into a particular plant’s needs and careful attention to the environment’s changing conditions. For him, this provides an “intellectual challenge,” which is just one factor behind why he enjoys gardening.

As a self-proclaimed “plant lover” since he was a little kid, social science teacher Pete Pelkey says bonsai enthusiast Mr. Miyagi from “Karate Kid” was his “hero.” While in elementary school and growing up in Barstow, Calif., Pelkey tended to a small garden and grew vegetables. Now, his garden has expanded past vegetables. He breaks down his current garden into several sections: fruit, vegetable, ornamental, rose, Japanese and finally, bonsai.

Pelkey has 55 to 60 miniature bonsai trees displayed on platforms around his garden, laid out like Mr. Miyagi’s garden, according to Pelkey. Once in a while, he “gets the urge” to add another bonsai — it’s “almost an addiction” — and sources them from local Cupertino nurseries like Yamagami’s or from an East Bay nursery in Sunol, where he typically buys junipers and pines to convert to bonsai. Sometimes, he buys them from his fellow bonsai club members, during their weekly Thursday meetings.

“I just bought two really beautiful pieces in October from one of our oldest club members — he’s getting older and sicker, and he can’t take care of his hundreds of trees,” Pelkey said. “One of them has to be about 100 years old, and the other has to be about 60 or 80 years old, and they’ve gone into some decline. I’m going to have to get their health back, but they’re going to be absolutely gorgeous bonsais once again. It’s like having a house and rehabilitating, so it’s a living thing.”

“You have to plan the year out and timing because you can’t just cut willy nilly on a plant — you’ll kill it,” Pelkey said. “You have to cut during certain seasons when it’s dormant or when it’s first budding. Yesterday night, we were re-potting all these bonsais because you have to put them in special soil that actually helps them get more oxygen in their roots. Living in a pot is not a normal thing for a plant, and so you have to make its life. You actually baby the plant, so it looks so beautiful.”

December is a busy month for Pelkey — it’s re-potting time, when the bonsai are dormant. The week after Christmas, he spent three to five hours each day in his garden, transplanting and fixing bonsai. February — budding season — is another busy month. Ultimately, Pelkey says the goal is to display them at bonsai shows, like at Cupertino’s annual Midori Bonsai Show, held in October.

Even though he plans around the timing and the changing environment, pests or disease can still affect the bonsai. When this happens, Pelkey researches plant diseases and anatomy — “botany, it’s like knowing your biology” — to try and take care of them.

“It’s kind of like children — you have a favorite one for a little while, and then somebody else becomes your favorite for a little while,” Pelkey said. “It just depends on how much you’re working on it, and how it looks at this moment, or how it’s adjusting to the world at the moment. Certain ones, if they’re sick, they take on more concern for a while, and then when they’re healthier, you don’t have to be as concerned with them.”

Fixing up and rehabilitating bonsai is one of Pelkey’s favorite parts of gardening. One particular bonsai — “the ugliest thing I’ve ever seen” — had been sitting on his bench for a while. During Christmas, he resolved to either do something with it or get rid of it. Using wire, Pelkey bent and reshaped it.

“It is absolutely the most beautiful thing you’ve ever seen now, and it looks so natural,” Pelkey said. “It will eventually set those positions in its life. Because it’s living, there’s an interaction you’re having with a living creature that actually has some calming and strange potential. It just feels so good.”

The “enduring” nature of bonsai appeals to Pelkey. Just as some of his bonsai were passed on to him from a club member to be shaped by his hands, Pelkey’s bonsai will likely be passed on to others after him, shaped by the next owner.
“Most of the bonsai I have will outlive me for hundreds of years,” Pelkey said. “What I start now, somebody else will put their hands on and modify, modify, modify. If humankind lives another three or 400 years, it’s a good chance somebody’s going to be holding on to this tree that I once started as a bonsai, which is a continuity that is just amazing to me.”
Pelkey sees building bonsai as a form of art, one that’ll continue to grow and evolve.

“Bonsai is like art and science that melds together into something beautiful,” Pelkey said. “When you finish a tree — you never finish a tree, it’s always a work in progress, it’s always getting better — it’s that moment where you step back after you’ve cut the tree and bent the tree and fed the tree and you see how beautiful that tree is. It’s like finishing a painting. If you’re an artist, it’s the same kind of thrill, of knowing you have created something that wasn’t there before.”