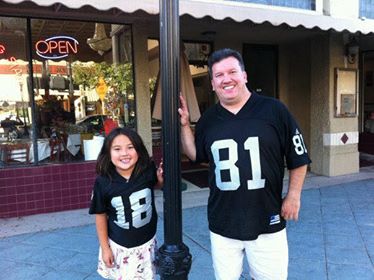 My dad and I when I was younger, matching in Raider gear often. We took this photo because our numbers were the opposite of each other.

This phrase is one of the first memories that comes to mind when I think about growing up.  Whenever I needed help putting on or taking off a sweater that I couldn’t get around my head, my parents would say this phrase, and I immediately knew to raise my arms in the motion the referees signify when a touchdown is scored.

The Oakland Raiders have been a part of my family even before I was born. Since my dad was born in the East Bay, he made sure we were a Raider household from the very beginning. Growing up I used to hate being a Raider fan because everyone around me supported the San Francisco 49ers, making me feel out of place. I would go home to my dad and complain about being different and ask why I couldn’t pick a team for myself.

As I grew up, however, I found myself proudly wearing Raider hoodies, socks, t-shirts, hats, beanies — literally anything that showed my pride for the team. I started to understand how much it meant to be a fan and how proud I was to be one. I started finding joy in trash talking with my friends and representing black and silver at every opportunity I had.

My parents always reminded me of the importance of family, and I found a family in the Raiders.

This team became one with the Mendez family. We became known for our extreme pride and joy in the Oakland Raiders, regardless of their performance.
When you thought Mendez, you thought Raiders.
We showed up to church every Sunday with our individual jerseys and I loved it. We even had a spot on the Christmas tree designated for Raider ornaments only that my dad called the “black hole,” and he was very serious about keeping it safe.

I remember the first game my dad took me to where I was actually able to understand what was happening. The arena, filled with passionate people yelling with every ounce of their energy terrified me but, it also was one of the most thrilling experiences of my life; I could feel the instant connection with everyone around me. My dad had always told me that this was one of the most loyal fanbases I would ever find, and I finally understood what he meant by that. The black hole looked like Disneyland to me, with people dressed up in extravagant outfits that screamed black and silver across the arena.

But suddenly, it all came to an end. I attended a Raider’s game for the last time in Oakland on Christmas Eve in 2018. My dad got us tickets as a Christmas gift knowing that it might be one of our last chances to ever see them play at home. The Raiders had officially announced that in just a couple years they would be moving to a newly built stadium in Las Vegas, NV.

I remember seeing my dad with tears in his eyes after the Raiders made a touchdown during that game. I knew how much this team meant to him, and what this move meant for our family. It was so hard to think about them leaving and imagine not being able to hop on the Bart and end up at the stadium within an hour. I saw countless signs that read “Stay in Oakland” —  a part of me tried to tell myself that they would make some sort of difference, knowing that they wouldn’t.

The game ended in the most perfect way with a win for the Raiders. The fans crowded the Bart station in cheers, dancing to music and celebrating — everyone was united over the love we shared for this team. It was the best way to say goodbye, and I am so happy to have that as my final Raider’s memory in Oakland.

I felt so much resentment towards the owner of the Raiders, and I still continue to feel a lot of anger in regards to this decision. It felt like he was breaking up the family out of greed. I have to admit, however, seeing the stadium in Vegas makes me happy because I know my boys are playing in a well deserved, beautiful arena. Still, it won’t ever feel like home.

Leading up to the move, I got constant questions and reminders about how I felt about the move, and I made it clear that I was not supportive of it. It felt like the players were being stripped from their home and had to move their whole lives from a place they were so familiar with. When people ask me if I’m still going to be a fan, without hesitation I say of course I will, even though I’m not happy with what’s happening. It’s like having a sibling — you love them even when you’re mad.

To me, Las Vegas will never be home: home will always be Oakland, regardless of what the headlines say. This Oakland family had a love that went further than just football and it’s going to continue forever. Words fall short when I try to describe just how much this team means to me, my family and so many people in the Bay. I feel like I’m saying goodbye, but I know this team will still be family, just a family far away.