Eminem’s “Music to Be Murdered By” shows little innovation

Eminem’s new album is unfocused and suffers from a lack of identity. 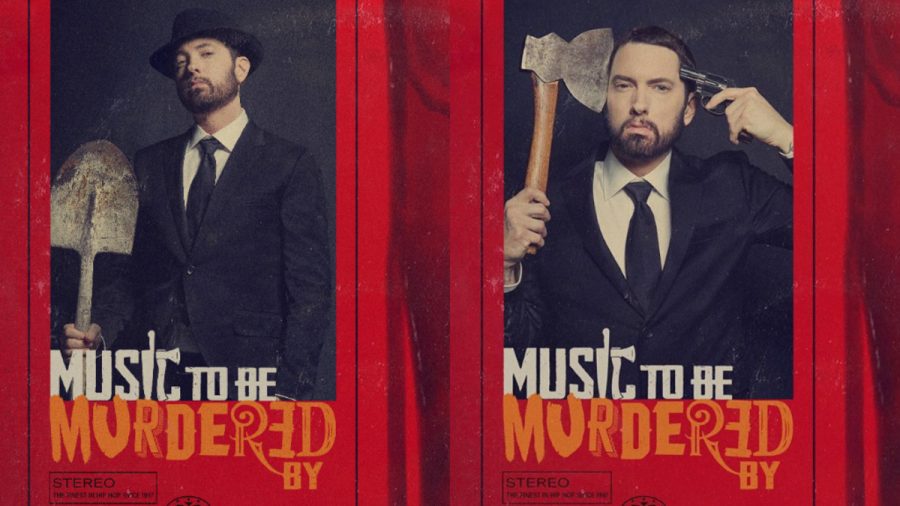 Both the title and cover of Mathers' latest album pay homage to Alfred Hitchcock's album of the same title.

t first glance, Eminem’s new album “Music to Be Murdered By” (MtbMB) seems like a return to form for Marshall Mathers (professionally known as Eminem), whose last two albums left a bitter taste in many listeners’ mouths on account of their — well — bitterness. Said albums were plagued with inoffensive pop-rap songs and corny lyrics, and filled to the brim with vindictive songs aimed towards those who had lampooned his work. Mathers also expressed in his lyrics a distaste for his contemporaries in the new wave of “mumble rappers.”

When I first saw the title and cover of the new album, I grew hopeful as both paid homage to legendary horror film director Alfred Hitchcock, which told me that the album was a callback to the music Mathers composed in the late 90’s to early 2000s, lyrical satire with a horrorcore twist. My curiosity further grew when Mathers posted an open letter to those who criticized the album for being insensitive, writing “This album was not made for the squeamish. If you are easily offended or unnerved at the screams of bloody murder, this may not be the collection for you.” Mathers’ earlier reputation mirrored that of Hitchcock’s in cinema as an artist who dared to defy standards regardless of the backlash they garnered from both the public and those within their industries.

Below, I’ve picked a few songs that stood out to me and represent trends in his new music that affect my perception of the album as a whole.

The album starts off with a bang with “Premonition – Intro.” The track begins with the eerie sounds of Mathers’ burying a woman alive followed by a sample of Hitchcock’s introduction to his album of the same title. The chorus, sung by Nikki Grier, comes shortly after, and sounds just like a woman gasping for air, befitting the scene set prior and seemingly reflective of the title and influence of the album. Unfortunately, the bang that started the album must’ve been a blank, as after the introduction the song goes downhill, with Mathers peddling the same bitter tone he portrayed in his last album “Kamikaze.”

He raps about how many thought his last album sounded bitter, and dismisses the criticism, saying that he is still lyrically skilled. However, this justification is only valid under the assumption that his music is any better than the music his peers output. And while Mathers may be able to rap faster and be more lyrically skilled, the problem with his recent music is that it just doesn’t sound good. His flow is formulaic and overused, his growl of a voice is annoying and his lines are corny. His recent works just don’t scream “talent” and are definitely not enough to compensate for his bitterness.

However, things do improve vastly on the following track, “Unaccommodating (feat. Young M.A).” Although the instrumental is a bit stale, like it could’ve landed on “Kamikaze,” Young M.A’s feature livens the track, gliding above the unrelenting beat. Mathers’ vocals complement the instrumental and his flow follows the beat precisely. However the questionable lyrical content of this song pushes me away from loving it, with multiple mentions of terrorist attacks that occured in the past few years dropped awkwardly at the end of the track. It feels like he mentions the events to try to get a rise out of his listeners on an otherwise normal song, contrasting his earlier work where the focus of the song was to be over the top and obviously satirical.

“Godzilla (feat. Juice WRLD)” was probably the most anticipated song among listeners, because of the late Juice WRLD’s presence and because Mathers was very quick to criticize “mumble rappers” and artists who frequently used autotune like Juice, with lines like,

“But nothin’ is feeling like anyone has any f—in’ ability / To even stick to a subject, it’s killin’ me / The inability to pen humility / Ha-ta-ta ba-ta-ta, why don’t we make a bunch of / F—in’ songs about nothin’ and mumble ’em?” littering his previous album..

The instrumental and the voices go surprisingly well together. Mathers emulates a high pitched and nasally voice on the track whose lightness and choppy flow rides the beat perfectly. Juice’s raspy and slightly husky voice fits his part of the beat nicely. The lyrics of the chorus, although minimalistic, allow Juice to set the lighthearted mood of the song.

The second verse by Mathers was watertight with no corny lines and successfully continues the fun bouncy nature of the song. However, the latter half of the third verse dips in quality, as Mathers is rapping as fast as possible, throwing the flow of the song off. It makes the song sound like it was there for the sake of rapping fast and showing off rather than in the pursuit of making the song sound good. Overall though, it was a good song and a respectful send off to a rising artist gone too soon, considering the fact that Juice cited Mathers as one of his inspirations in interviews prior to their collaboration.

“Darkness” in my opinion is as close as Mathers gets to vintage Slim Shady on the album. The song is a narrative of both his life and the inner mind of the 2018 Mandalay Bay Hotel shooter. Mathers masterfully intertwines the narrative of him as a rapper getting ready before a show, and the thoughts of the shooter prior to the shooting through the use of numerous double entendres.

He uses the parallel to show that he and the shooter were not so different, and comes to the realization that it could’ve been him perpetrating the attack, noting that the motive of the actual shooter is unknown. He depicts the hopelessness of stopping the trend of mass shootings in the U.S., ending the song with a seemingly never ending montage of news reports detailing the numerous mass shootings that have occurred in the past few years.

While the song is beautiful and is delicately written to provide his unique view on the shootings, I think that the impact of the song is partly lost due to Mathers joking about the same topics in other songs on the same album.

And this highlights my biggest problem with the album. Although it has a number of well constructed songs, the songs on the album discredit one another. Songs where he is lyrically bankrupt and lack substance actively disprove his defense of his bitterness through the excuse that he is lyrically superior and thus gets a free pass for being bitter. Songs where he writes and spits insightfully about social issues and his view on them are instantly contradicted by stale jokes he makes on the same issues that he wrote so thoughtfully about. Had the jokes been extreme to the point where the satire was impossible to ignore, these tracks would have worked in conjunction with the insightful tracks. However, they do not, and ultimately the album lacks focus which doesn’t allow Mathers to pay homage to Alfred Hitchcock, which was seemingly the entire point of the album.

If you want to listen to horrorcore rap reminiscent of his early work, I would recommend Lou the Human’s “Humaniac.”