A stroll through the Cupertino farmers market

Employees share their experiences selling at the local market 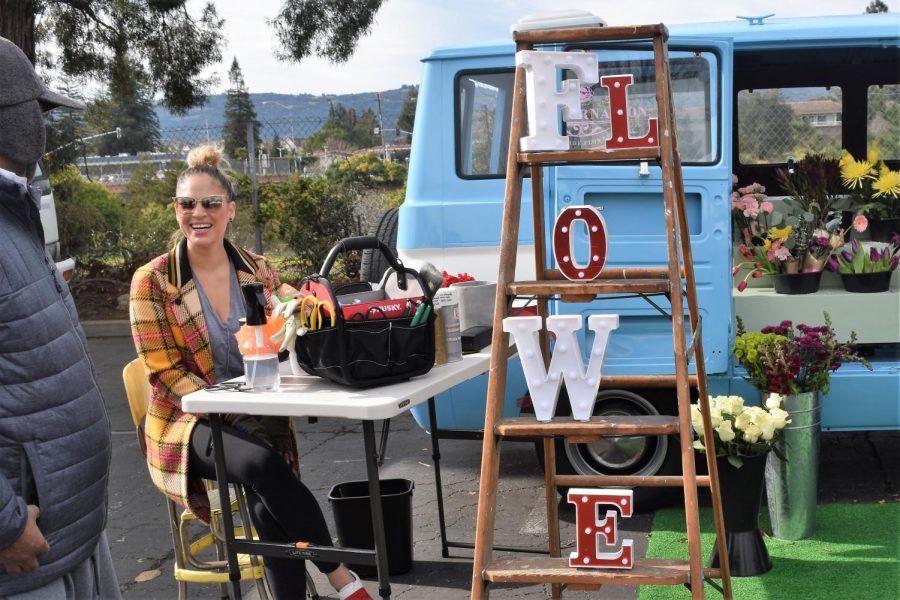 Founder Abi Lugo greets a passerby and answers questions about her flower shop on wheels.

ucked away next to the Oaks Shopping Center, vendors lay out their produce, ranging from bunches of cilantro to pints of shiny, red berries to fresh cut flowers. Other vendors display prepared foods, like hummus, pastries and Chinese baked buns. As customers pass by, an aproned employee shouts, “Free samples! Get your free samples!”, using metal tongs to offer sliced nectarines into awaiting hands.

Operating from 9 a.m. to 1 p.m. every Sunday, the Cupertino farmers market is just one of 12 branches of the West Coast Farmers Market Association.

Fifteen years ago, employee Jezreel Cadiz’s uncle started his own company, Kem Farms. After earning enough money and moving from Las Vegas to California, Cadiz’s uncle began partnering with other farmers and specializing in berries.

Six months ago, Cadiz started working for the family business and has been selling at the Cupertino farmers market for one month. On this particular Sunday, Kem Farms offered strawberries, blueberries and raspberries, selling a pint of berries for $5 and three pints for $13.

Cadiz believes that supporting small businesses at farmers markets not only benefits the vendors but also the customers, as it provides them with local produce. Kem Farms, for example, grows berries in San Luis Obispo. According to Cadiz, the freshness of their fruit differentiates them from larger grocery store chains that may import goods from other states.

Cadiz’s favorite part of the job is interacting with other people, whether it’s his boss, other employees or customers.

“I just show them [and] give them respect,” Cadiz said. “‘How are you doing? How’s your day?’ I’ve never had a rude customer or anything. I just have a friendly conversation with them.”

Pastry chef Muriel D’Agostino and her husband moved from France to California with the intention of starting an acupuncture business. With previous experience working at a two Michelin star restaurant in France, D’Agostino continued baking and eventually started her own business, Adorable French Bakery. In addition to catering for events and weddings, the bakery sells at farmers markets in the San Francisco to Carmel area, as well as to coffee shops and restaurants.

Employee Alicia Caron, who’s been with the company for three months, first heard about Adorable French Bakery from her roommate, who also works for the company. Originally, Caron started out baking in the kitchen, then later began selling at the bakery’s farmers markets booths as well.

According to Caron, selling at farmers markets versus storefront can help save money and time for the company, especially since Adorable French Bakery is a side business for the D’Agostinos. However, Caron finds that selling at a farmers market can also be difficult, both physically and mentally.

“You’re on your feet all day long,” Caron said. “I can’t imagine people who go to farmers markets one day after the other or during the week as well because you get up super early, and you have to set up your stand, and then you have to sell all day long. It can also be sort of hard mentally because if you don’t sell very well, it’s like, ‘Oh, I did not make a lot of money. I have a bunch of stuff that might go to waste.’”

Despite the challenges, Caron feels that the relative freedom she has over the pricing when selling at a farmers market allows her to have more personalized interactions with customers.

“You have a little bit of freedom with the prices here, like we’re allowed to knock prices down if things aren’t really selling well or make deals,” Caron said. “I can give stuff away if people buy a lot. At a storefront, it’d be a lot more like, ‘This is it. You buy what you buy.’ I really like selling to people, and then they eat it, and they’re like, ‘Oh my god, this is so good.’”

Three months ago, equipped with an accounting degree and no previous experience with floristry, Abi Lugo founded a flower shop on wheels: Pink Carnation Curbside Flowers. Previously, she worked several 9 to 5 jobs in HR and a restaurant business. Lugo decided she needed to do something on her own and ventured into entrepreneurship.

Lugo found a 1967 Dodge, fixed it up and converted it into a curbside flower shop, with the goal of making floristry more accessible to customers. The convenience factor of the built-in transportation allows Lugo to operate in a variety of locations and reach more people.

“We just try to park anywhere and sell flowers, do an old vintage vibe to our flower shop,” Lugo said. “[We make] it less intimidating for everyone to just walk up to a flower shop.”

Lugo also did online research to find farmers markets in the area and applied to be a vendor. This involved reaching out to the market directors and getting approval to participate by sending in pictures of the van and describing the purpose of her business.

To prepare her curbside flower shop, Lugo picks up her order from the florists early in the morning, then cuts them at home. Because flowers are delicate and “temperamental,” she takes special note of their environment, ensuring the flowers are housed in appropriate water and temperature conditions. Once at the farmers market, unloading the van takes 45 minutes and loading it up again at the end takes another 45. In total, it takes Lugo roughly three hours to prepare for a four-hour farmers market.

Lugo believes the interactive aspect of her flower shop on wheels differentiates it from a typical florist or grocery store.

“I tried to make it so people are more hands-on, and they build their own bouquet versus you walking into a Safeway or Trader Joe’s, where they already have it made for you, and you just pick it up and take it home,” Lugo said. “You feel a little more pride when you see an arrangement in your house, and you put it together.”

“People are still very unsure because they’re so used to just picking up a bouquet that’s already made for them,” Lugo said. “This is where I’m still in the stages where I’m educating people. Just feel free to pick up a flower, smell it. If you don’t like it, you can put it back. You can always start from scratch. You can figure out what you like, what color schemes you like — it’s fun.”

Other than the novelty factor of a flower shop on wheels, Lugo says her vintage 1967 Dodge typically garners attention as well, whether it’s from customers or passersby.

“[My favorite part] is people’s reaction of an old van that’s been turned into a flower shop,” Lugo said. “I think it’s the nostalgic memory people have of a van like this, and I love it. I see people take pictures and older crowds, they say, ‘Oh my God, I can’t believe you have a van like that,’ so that’s the most satisfying thing. It’s very gratifying.”