In its fourth league matchup of the season, MVHS ties against Milpitas HS 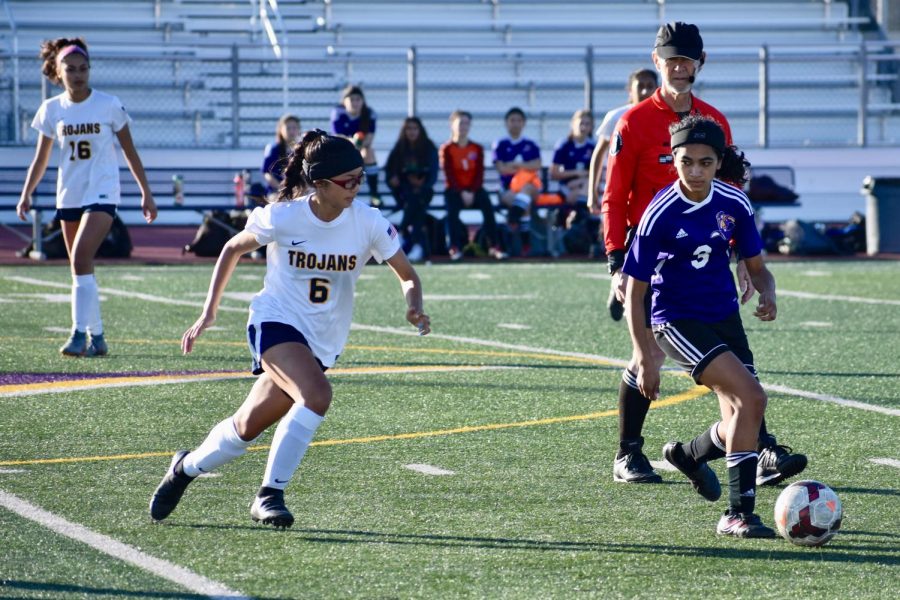 Freshman forward Diya Balakrishnan peers over her shoulder at the oncoming defender in order to anticipate her next move so that she maintains possession of the ball against Milpitas HS.

Seven offside calls and 80 minutes later, the Matadors failed to put any goals past Milpitas HS, but did not concede any either. With a final score of 0-0, the game was full of back and forth play between the two teams with few scoring opportunities.

Prior to the game, midfielder junior Sidney Chan knew that her teammates had to do their best in order to match the intensity of MHS.

Throughout the first half, Chan described their offense play as sloppy and low energy. Chan believes that this had a lot to do with the fact that MHS pressed the Matadors hard for every possession, causing them to be frantic.

With the second half underway, mirrored the first half for the Matadors. Multiple runs were made down the sideline by junior Skylar Ploshay, but ultimately the resulting shots on goal were saved by the MHS goalkeeper.

Towards the end of the second half, with the game on the line, MHS broke through the MVHS defense and had a clear shot to score, but senior goalie Catherine Cole came up with the save preserving the tie for the Matadors.

“I felt like I had played a little more aggressively this game,” said Cole. “[MHS] had a lot of high balls coming in that were a little bit off my arc, but I would take a risk and try to catch the high ball and step up.”

In their next game against Fremont HS on Jan. 24, Cole admitted that their coach told the team that this was going to be a tough game, but she felt confident that the team was going to come out with renewed energy. Cole was correct as the Matadors won 2-0 at FHS.

MVHS girls soccer faced Milpitas HS on Jan. 22 in its fourth league match of this season. Due to numerous offsides calls and stellar goalkeeping during the game, both teams were unable to score, ending in a 0-0 draw. MVHS improved to a 2-1-1 league record. Photos by Anish Vasudevan