The rumors of an impending World War III: A breakdown of the situation behind recent US-Iranian Conflicts 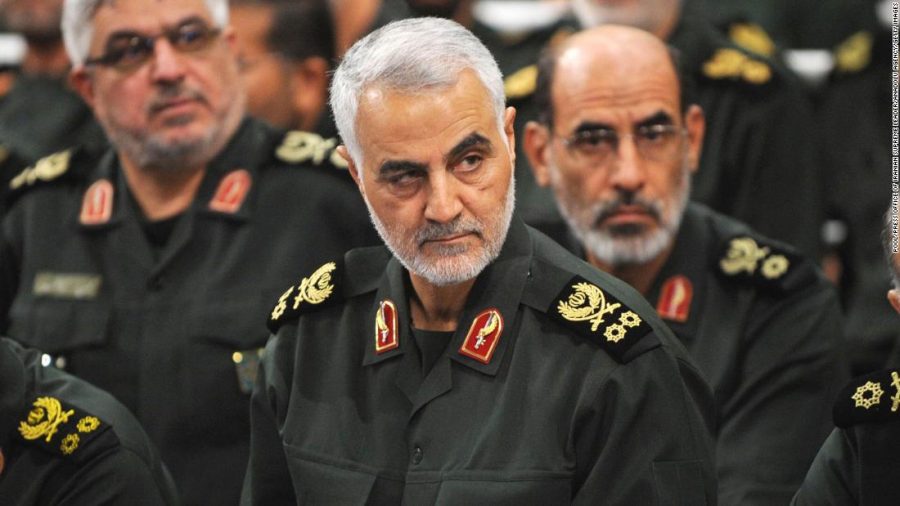 Iranian Maj. Gen. Qasem Soleimani was killed in a U.S.-ordered drone strike on Jan. 3, 2020, while on an alleged peace mission in Baghdad, Iraq. President Donald Trump claimed that the assassination had been ordered because Soleimani was planning to attack American diplomats in Iraq, and because he was responsible for the death of millions of people. At the time of his assassination, Soleimani was instrumental in bringing Kurdish and Shia forces together to fight ISIS.

When biology teacher Pooya Hajjarian heard about the assassination of Soleimani in the news, his first thoughts were about whether or not his family in Iran would be in danger if the U.S. attacked Iran.

“I started thinking about how my family in Iran are in the far east, so assuming that all of the rockets and bombs come from the west, from Iraq and from Turkey, hopefully my city is too far to be hit,” Hajjarian said. “Which is really selfish thinking, but I had to start thinking about my friends and family that are still [in Iran].”

Sophomore Arvin Ebrahimzadehkoochesfahani, who moved to the U.S. from Iran one and a half years ago, felt immense sadness when he heard the rumors about the possibility of a war between Iran and the U.S. He feared for the safety and the lives of Iranian people above any of the politics surrounding the assassination or counterattacks. He understood that if a war did occur, it would happen in Iran and the biggest loss would be suffered by the Iranian people.

When Ebrahimzadehkoochesfahani told his parents about the assassination, he was met by disbelief. He remembers hearing about Soleimani in the news frequently while living in Iran, but neither him, his family nor Hajjarian felt any sadness at the death of Soleimani himself.

Hajjarian believes that some of the anger being felt by other Iranians over Soleimani’s death has to do with the manner in which the assassination was conducted. Ebrahimzadehkoochesfahani believes that the anger is due to many Iranians’ belief that Soleimani was instrumental in keeping ISIS and other terrorist groups out of Iran.

Freshman Liana Khorasani was angered by the way that the U.S. conducted the assassination. She took to her Instagram story to post about how the actions of the U.S. government were inherently wrong.

“I think it’s terrifying, twisted and sad that Donald Trump has publicly tweeted about targeting/killing the innocent people and cultural sites of Iran,” Khorasani wrote on her story. “Especially when the Iranian government has stated that it does not want to harm the people in America, showing that they understand that this ‘war’ should be between the two countries’ governments, not the people.”

After posting, she received backlash from several of her followers about how she was supporting Iran instead of the U.S., but she stood by her words. Khorasani believes that the repercussions Iran would suffer as a result of such an attack and the possibility of a war greatly outweighed the crimes that Soleimani had committed.

“I want to make it clear that many Iranians, including my family and I, are against most ways of the Iranian government,” Khorasani wrote. “But at least the government in Iran understands that the common people of the two countries are innocent and should not be harmed.”

Khorasani was not the only person who took to social media after hearing about the attacks. Hajjarian also saw a large response online to the idea of an impending WWIII, especially on Facebook, but didn’t encounter anything extremely offensive. Much of what he saw defended Trump, while others criticized his actions. Hajjarian feels that most of the online content about the assassination and a “WWIII” was created by people who did not fully understand the situation.

“I think so much of our public is so misinformed about what’s going on,” Hajjarian said. “I think we’re now living in a time where we’re just choosing party lines and backing up whatever happens and being in support of it, without really understanding anything.”

Ebrahimzadehkoochesfahani also checked Donald Trump’s Instagram page to see the response of Iranians after hearing about the attack.

“I saw that all comments on Trump’s Instagram were from Iranian people, and they were all insulting Trump,” Ebrahimzadehkoochesfahani said. “They were saying, ‘You shouldn’t have killed Soleimani, we will get revenge’ and things like that, but I don’t think that they actually want to get revenge. They don’t really want a war.”

Both Ebrahimzadehkoochesfahani and Khorasani saw several memes on Instagram about an impending “World War III” that would begin between the U.S. and Iran.

Ebrahimzadehkoochesfahani believes that the memes were posted by misinformed people who were influenced by the media. Much of the offensive online content affected him because he understands that the media’s portrayal of Iran and the Middle East in general is very different than his personal experiences. Nowruz, or Iranian New Year, and Shab-e Yalda, an Iranian winter solstice celebration, were the two festivals that Ebrahimzadehkoochesfahani missed when he moved to the U.S. from Iran one and a half years ago.

“Every spring all the people used to hang out every day,” Ebrahimzadehkoochesfahani said. “That was a good memory for me. From the 1st to the 13th day of spring, all the families, friends and relatives used to hang out a lot. Those days [were] the best days ever.”

Ebrahimzadehkoochesfahani initially struggled to assimilate with American culture upon moving to the U.S. He found that despite the fact that American children were given more freedom in certain aspects than in Iran, his idea of the U.S. that he’d acquired from Hollywood movies was largely exaggerated.

“In the movies, everything looks so perfect, [but] it wasn’t as good as in movies, and in Iran, it [was] good that I was with my friends and family and relatives,” Ebrahimzadehkoochesfahani said. “But overall, I thought [America] was better than Iran, because here I think we have more freedom. In Iran girls and boys go to separate schools and here they don’t. And here we can drive when you’re 16, but [in] Iran, we have to be 18.”

Hajjarian also struggled with adjusting to American culture after moving to the U.S. in 1992 at age 12. Before coming, he remembers his father telling him how streets in the U.S. were so clean you could lick them. But moving to a foreign country where he did not speak the language was extremely challenging for Hajjarian.

“I think at that age my self confidence took a hit, because you’re a 12 year old having lunch by yourself at school,” Hajjarian said. “You can’t understand what anybody says. There were a few kids who tried to talk to me, and they really try, but when you don’t understand, what do you do?”

Similar to Ebrahimzadehkoochesfahani, Hajjarian misses a lot of the Iranian culture that he’d left behind.

“There’s so much hospitality in Iran, the people are so incredibly warm,” Hajjarian said. “I think I always thought that was how everybody is everywhere, and not to say that the U.S. isn’t [warm], but it’s just different culture. I loved how warm Iranians are, and how when you’re with a family of Iranians, they really make you feel like family. I think that’s really cool.”

Both Hajjarian and Ebrahimzadehkoochesfahani struggle with balancing Iranian and American culture in their lives. One way they try to maintain Iranian culture while living in the U.S. is to speak Farsi with their relatives so as not to forget the language. For Hajjarian, this is a struggle because he has spent most of his life in the U.S. and speaks English better than Farsi, but still remains torn between the two cultures.

“It’s kind of hard [because] our family adopted a lot of American traditions,” Hajjarian said. “What became even more important than Persian New Year was Thanksgiving or Christmas, like we truly tried to assimilate into the culture here. Sometimes I wonder, ‘Am I more Iranian or am I more American?’ I think especially with my looks, I don’t look Iranian and I don’t look American so what am I? I think sometimes it’s felt no matter what culture I’m in, I’m an outsider.”

Ebrahimzadehkoochesfahani, Hajjarian and Khorasani’s main hope after seeing the public’s online response to the assassination is for peace between the two countries they all have such personal connection to. Ebrahimzadehkoochesfahani believes that the media misinforms the public about Iran and the Middle East, and hopes for that to change because he understands that the Iran that he has experienced is vastly different than what much of the public assumes.

“People from other countries think that people in Iran are terrorists because there are so many terrorist groups, [but] it’s not like that at all in Iran,” Ebrahimzadehkoochesfahani said. “We don’t have any wars, any killings. There are some problems between [the] government and [the] people, but Iranian people don’t want to be in fights or wars. And right now, America and Iran are both fighting ISIS, but we’re not on the same side, and I don’t know why.”