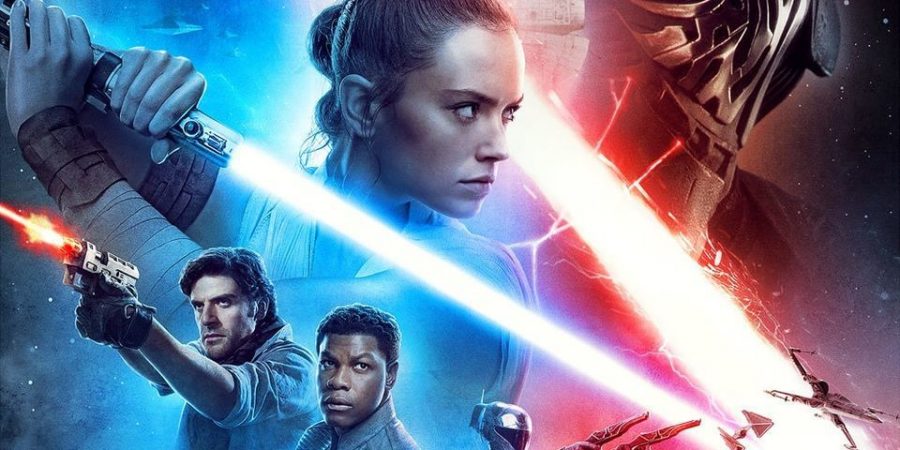 The movie banner for the newest film, "The Rise of Skywalker."

rapping up the iconic “Skywalker Saga,” “Star Wars: The Rise of Skywalker” serves as the third issue in the Star Wars sequel trilogy and the ninth film in the series that was created over  40 years. The film earned over 500 million dollars in its first week, eventually reaching up to over one billion dollars worldwide in its third week, making it the ninth highest-grossing film of 2019 despite being released in late December. Even though the movie served as a satisfying ending to some fans, the movie fell to heavy criticism for others, earning a 52% on Rotten Tomatoes.

In the most recent trilogy, the seventh movie “The Force Awakens” was directed by JJ Abrams, whereas the eighth one, “The Last Jedi,” was directed by Rian Johnson. Sophomore Rudra Phalnikar, who has been following Star Wars for four years, says that because the directors had different ideas on what to do in the trilogy, he was anticipating the latest movie’s negative reviews.

“Those who liked the eighth movie didn’t like the newest one because [of the] different directors, but I didn’t mind [since] I hated the eighth movie,” Phalnikar said. “I really liked how they ended the series in the new movie. I would’ve liked [Abrams] to direct all three. I think that the ratings and reviews would’ve been much better if he had.”

According to junior and avid Star Wars fan Chinmay Dandekar, who started watching Star Wars in seventh grade, the newest film was “disappointing” because of its lack of an interesting storyline. Contrary to popular opinions such as Phalnikar’s, who prefers the earlier movies because of the common lightsaber duels and more iconic characters, Dandekar does enjoy the prequels of Star Wars and doesn’t necessarily care about the difference between the current movies and the previous ones. With that in mind, he felt the plotline throughout “The Rise of Skywalker” was an easy way out, rather than including plot twists or character development to enhance a better ending to the saga.

“[The movie] felt very rushed, like [Disney] was working to meet the deadline instead of creating an actual story,” Dandekar said. “[For example], Rey’s character ends up becoming a Skywalker, so I felt like that was sending a message that you have to be a Skywalker or related to them to be good, which is not exactly the greatest message to send. I wanted to see [her] turn to the dark side because I thought that would be a good subverting expectation, so seeing [that] happen [would‘ve been] pretty cool.”

A massive Star Wars fan herself, new teacher mentor for MVHS and Cupertino HS, Jackie Corso shares the same sentiment as Dandekar. Corso recalls seeing the original trilogies at a young age with her dad and raving about them with her best friend in fourth grade. The whole idea of Star Wars appealed to her, right then and there — the classic “Hero’s Journey,” the space settings, the lightsabers and the strong female presence of Princess Leia. Despite her belief that the prequels were subpar, she found the current trilogy to be somewhat better. However, after seeing the film on opening night, Corso, among her other criticisms, felt one of the main issues she had with the movie was that the final character development of Rey was a “cheap shot.” Overall, she believes the movie was not terrible but not great either.

“I didn’t think it was a great film,” Corso said. “It was visually really cool. There are some really nice fight scenes. [About] the criticism, [when] we hear that Rey has no real family lineage [in Episode VIII], I thought that was cool, like, ‘OK, it means anyone can be an expert in the force and be this really powerful person.’ So it felt like almost a cheap shot [to say], ‘Oh, she’s a Palpatine,’ [as if] they needed to explain why she was so good and powerful, which I felt kind of took away from her as a powerful character.”

Another reason Corso thinks the movie lacks a more interesting storyline is because the directors seemed to be catering more towards bringing back iconic characters such as Lando Calrissian, rather than shaping the new characters they already established. Additionally, Corso notes the importance of sticking to the established “rules” in previous trilogies; throughout the original trilogy, Luke Skywalker had to go through extensive force training in order to effectively use it, whereas in the newest one, Rey is easily able to use the force, overriding these earlier plots.

Because Star Wars was sold in 2012 to Disney, Phalnikar believes that the original trilogies are better because the film’s original creator, George Lucas, had a greater influence on them. Phalnikar hopes to see more improvement in the future films with the incorporation of Lucas’s input.

“I would prefer if [Lucas] had some sort of say in the future projects because it is his creation, like the whole universe is Lucas’s creation,” Phalnikar said. “I don’t think that [Disney] should throw out some series or movies just for getting money, and I would like to see more TV shows surrounding the current trilogy just to get more information on the current characters. [Mostly], I want [to see] Lucas writing the storyline and script for future projects.”

Despite their differing opinions on the movie, Phalnikar, Dandekar and Corso believe that while there is a lot in store for the future of Star Wars, Disney shouldn’t oversaturate its market with multiple Star Wars based media, and instead, take more time to develop deeper plotlines. Overall, Corso believes the long-lasting impact of the series is still there and stresses the importance of keeping it alive.

“The storyline [of the last movie] was fine — it concluded things and wrapped it up in a way that felt satisfying,” Corso said. “I just think [Star Wars] is a series that appeals to a lot of different people across age and I think that’s really cool.”