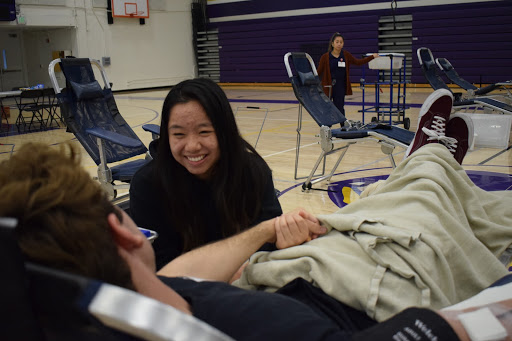 Senior Nate Reyes lies on his seat as he prepares for the procedure while holding on to senior Allison Wu, who smiles at him.

A strong smell of antiseptic wafted over 12 blue chairs arranged in a U-shape in the main gym. Over 70 students signed up to donate blood at the annual Standard Blood Drive held on Jan. 10, which was a part of the non-profit Stanford Blood Center’s (SBC) effort to increase the number of blood donors in the country and provide blood to hospitals that need it.

Students 16 years old with parent permission or older had the option to sign up for an appointment time in advance or walk in. Upon entering, staff signed the students in, ensured they had eaten, checked their pulse, inquired about their travel and health history and then drew one unit (525 milliliters) of blood from the superficial veins in the inner elbow. After this one hour process, SBC Volunteer Dan Nelson gave students snacks at the canteen before they returned to class.

Nelson, who has been part of SBC for three and a half years, makes sure all donors receive relief after their blood is drawn. He provides orange juice and water, ensures that patients’ eyes do not glass over and checks facial coloring, which tells him if a student may faint.

According to Nelson and SBC Donor Recruitment Manager Karen Hendryk, who is responsible for creating partnerships with churches, small businesses, schools and other small organizations, there is a shortage of blood donors in the U.S.

“If there was a catastrophe here in our community, it’s the donors that donated yesterday, the day before that or even last week that are going to help those patients today,” Hendryk said. “You never know when someone needs blood. So we rely on these members of our community to help by giving part of themselves, part of their day, to simply save someone else’s life.”

Senior Aditya Dash has been aware of the event since his freshman year and was motivated to take advantage of the opportunity to donate for the first time.

“My family and people around us have gone through stuff in their lives where they needed blood,” Dash said. “If I can do something for them that makes [me] feel better, it also makes me feel responsible for something good happening somewhere.”

One of Hendryk’s favorite things about working at SBC is telling donors how the plasma, cryoprecipitate, white blood cells and red blood cells in just one unit of blood can help as many as three people. After donation, 250 mL of plasma is removed from the unit to create a packed red cell product (PRBC), which can help patients with hemorrhages, symptomatic anemia or blood loss.

“We need the real stuff,” Nelson said. “We need more younger people to get involved because there’s no way to make artificial blood. It’s older people in their late 50s, 60s and 70s that are donating, not a lot of younger people.”

Nelson has donated platelets, blood cells that help clotting, every two weeks to SBC for 25 years. According to Nelson, the demand for platelets is extremely high because one platelet’s life span is about four days. In the three hour process, the platelets are extracted from the blood, which is returned to the body.

Junior Aditi Singh agrees with Nelson, stating that there is a high demand for blood at local hospitals.

“Blood is kind of a rarity, especially in the medical field,” Singh said. “Even one pint, if it can help someone, then I’ll be willing to give it.”

People like Nelson, Hendryk and SBC staff member Dan Rhodes are constantly trying to find ways to increase the number of blood donors. Many people are not eligible donors because they travel to countries with disease endemics whereas others choose not to donate for cultural or personal reasons. According to Rhodes, there seems to be a stigma involving needles and drawing blood, thus making fewer people motivated to donate.

“Kids now they think that there’s something wrong with the needles,” Rhodes said. “They don’t want to share their DNA. They give you excuses [like] they don’t like needles. Well, that’s not a reason.”

Dash and senior Sid Viddamatla both agree with Rhodes, stating that they were initially nervous about donating blood due to a fear of needles.

“I’m scared of needles,” Viddamatla said. “And trust me, you want to look away when they insert that needle into your veins.”

Despite their apprehension, Viddamalta ultimately decided to donate blood because he was O-negative: the universal donor. Hendryk shares his drive of helping others in contributing to the recruitment of blood donors.

“I really like helping,” Hendryk said. “I really like being a part of something, even if it’s small, in knowing that the impact I have in the work I’m doing on a daily basis can help someone.”

Rhodes acknowledges that multiple experiences he had with trauma and cancer patients who needed blood to perform surgeries and transplants give him motivation to continue helping SBC.

“[Patients] are in the back of the vehicle saying they’d be dead if they didn’t get [blood],” Rhodes said. “There [are] hundreds of stories. That’s why you get kind of callous [or] numb to it, but it gets you up and you get to work every day.”