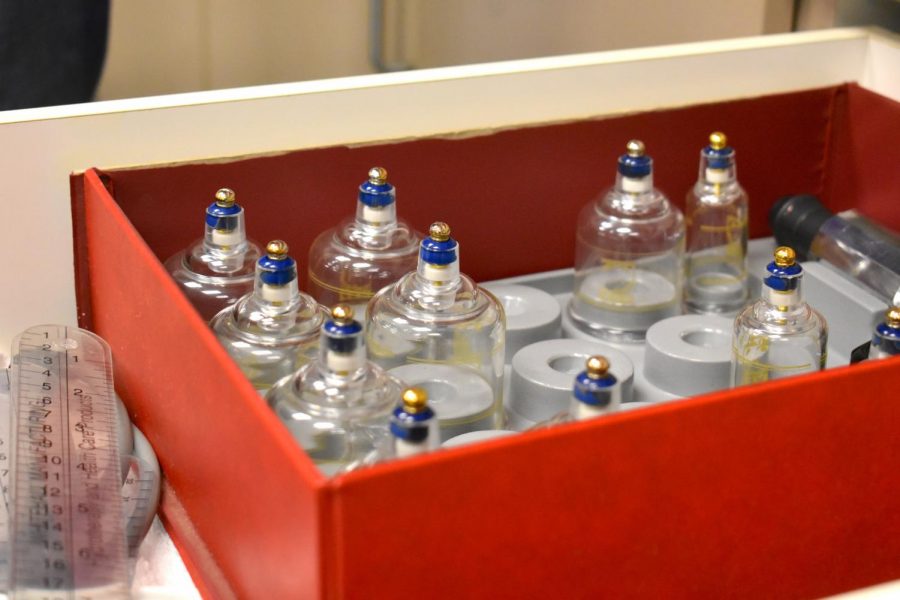 s the acupuncturist took the needle out of the packaging and carefully touched it to her skin, junior Samantha Dunn felt a pinch. Desperately trying to translate the rapid fire Chinese among the doctors to figure out what was happening, Dunn felt more pain as he pushed the needle in deeper, but soon the feeling went away. This was repeated 30 times all over Dunn’s ankle.

After fracturing her ankle earlier this year while blocking a player from Sequoia HS in a preseason volleyball game, Dunn turned to acupuncture, a type of traditional Chinese medicine, to help ease the swelling and promote healing in her ankle.

“It hurt at first when they put in the needle,” Dunn said. “But then after a while they let me lay there for close to half an hour. And after a while, it started to feel almost tingly. It felt like something was happening. I don’t know if what was happening was actually beneficial, but it felt like there was activity in the injury, which felt good.”

According to Johns Hopkins Medicine, acupuncture can act as a treatment for many conditions, from anxiety to arthritis. While Dunn went to acupuncture for a physical injury, Chinese teacher Zoey Liu used acupuncture to help with stress-related eating issues after her dietician recommended the treatment.

Apart from the acupuncture, Liu explains that the doctor at her Chinese medicine clinic also puts in “tiny magnets,” or ear seeds. As stated by Healthline, “Ear seeds are small seeds used to stimulate pressure points in your ear.” Similarly to acupuncture, ear seeds are used to treat various health issues depending on the placement of the seeds. In this case, they were used to aid Liu’s diet and digestion.

Although Liu does not believe the ear seeds were very effective, she had a positive experience with the acupuncture portion of her treatment. However, because the treatments are not covered by insurance and are expensive, Liu stopped getting treated.

While Liu’s family has a history of practicing Western medicine, Liu recalls one of her first times witnessing traditional Chinese medicine firsthand — when she was a child, her dad used cupping, another method of traditional Chinese medicine, on her mom to help soothe pain in her waist.
“I was horrified,” Liu said. “When [they] took it off, the first time I saw it, I was shocked. I thought my mom was hurt. And she said she didn’t feel any pain from the bruise — she actually felt better.”

Athletic trainer Javier Margarito uses traditional Chinese medicine techniques at MVHS. Margarito learned these skills from massage school, where he learned massage therapy with a component of acupressure, where pressure is applied to certain acupoints. However, he mainly learned how to perform cupping from online courses. Margarito explains that cupping is a form of soft tissue mobilization that affects the skin and its surrounding tissues, as well as the blood underneath.

Cupping can be used as an alternative to rolling out muscles with a foam roller depending on the location of a muscle or injury, especially if the pressure of a foam roller is too much to handle. While the effects of cupping are very similar to those of rolling out a muscle, Margarito describes that the cups draw the skin up, which allows blood and tissue to move around, while a foam roller applies direct pressure to the muscle.

“The basic principle behind it is to restrict movement or increase blood flow,” Margarito said. “From a traditional Chinese medicine standpoint, the main focus is you’re trying to affect qi, or the movement of energy. When you have any kind of imbalance or something like a muscle that has a knot, that’s stuck energy. So you’re trying to alleviate that.”

Cupping has become more popular in recent years after Olympic swimmer Michael Phelps was seen with circular bruises on his body at the 2016 Summer Olympics. Various celebrities like Kim Kardashian, Justin Bieber and Jennifer Aniston have been spotted sporting these marks as well.

Margarito notes that another popular technique of traditional Chinese medicine that he uses on athletes is gua sha, or scraping. He explains that the company Graston has standardized the practice, labeling it “instrument assisted soft tissue mobilization.”

“Basically you’re taking a metal tool with a blunt edge to move tissues underneath [the skin] and you’re getting those restrictions out,” Margarito said. “You can do a variety of different things, but you can overuse [the tools], you can actually cause some damage with them, so it takes some time and experience to use them.”

While she has never tried gua sha, Dunn used cupping to heal a more severe muscle strain in her quadricep, where she had eight cups placed on her leg, promoting blood ow and speeding up the healing process. Rather than fire-cupping, which involves glass cups and fire, Dunn used cupping with plastic cups, in which a syringe creates a vacuum, suctioning the skin. Although the overall experience felt beneficial, she distinctly remembers the pain, especially when the cups were moved around the area, leaving her with circular-shaped bruises.

Traditional Chinese medicine can also include preventative measures that involve incorporating herbs into one’s diet, according to Dunn.

Overall, Margarito explains that traditional Chinese medicine takes a very holistic approach in healing, examining the body as a whole rather than focusing on specific components and parts of the body like Western techniques do. He also describes the theory of tensegrity in which everything is interconnected by fascia, the body’s main connective tissue. It illustrates the way tension works throughout the body, explaining the how one aspect of the body can affect another.

Another unique aspect of traditional Chinese medicine is the way it focuses on the flow of energy. For example, acupressure looks at different pressure points in the body and what effects they have on health, such as alleviating congestion by pushing on the cheekbones.

For Liu, Western medicine is used to get rid of any short-term illnesses right away, whereas traditional Chinese medicine could be considered for more long-term illnesses or injuries, as more of a lifestyle.

On the other hand, Dunn believes the main difference between the two is that traditional Chinese medicine is more based around the body’s internal processes, dealing with inflammation or blood flow, while Western medicine focuses more on physical healing.

“I think for certain injuries or illnesses, Chinese medicine works better than Western medicine,” Dunn said. “But for other things, like [if] you have a broken bone, Western medicine will probably help you more.”

Despite their differences, Margarito believes both traditional Chinese medicine and Western medicine have their benefits.