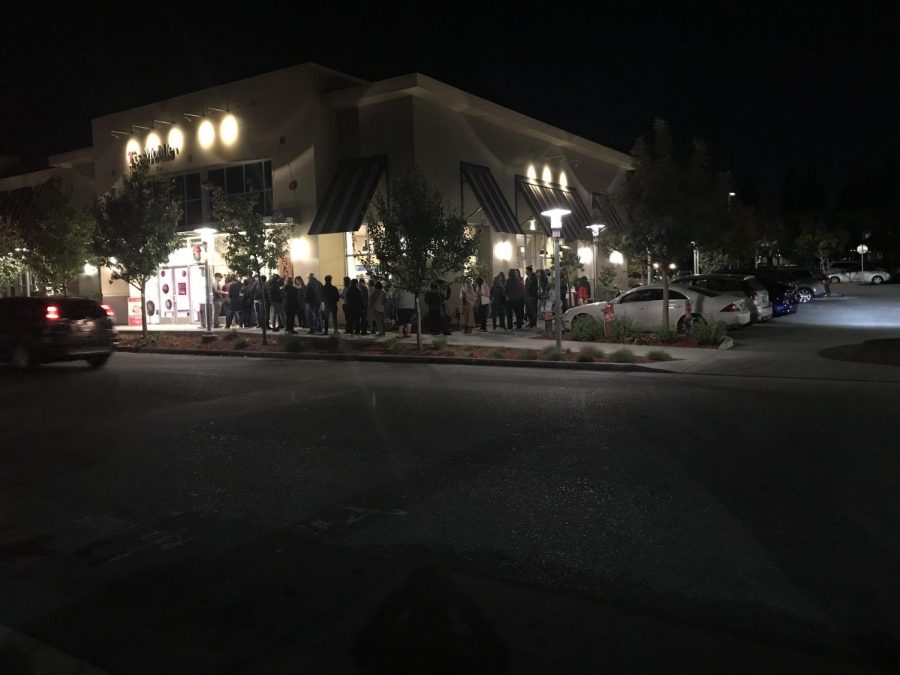 Afuri Ramen +Dumpling sits comfortably next to a T-Mobile and a Sleep Number, drawing crowds seven days a week.

With the rising population in the Bay Area in recent years, there has been no shortage of mouths to feed and no shortage of restaurants to accommodate this increase. One of the many popular dishes in the area is ramen, or Japanese style wheat noodles. In particular, restaurants like Kahoo, Ramen Nagi and Mori Kitchen have brought light to the once lesser-known dish. The latest attempt to provide Cupertino residents with high quality noodles is Afuri Ramen + Dumpling, the American offshoot of a ramen chain with the same name in Tokyo. However, Afuri sorely misses its mark on both the quality of the food, overall service and design of its facility.

Located in Cupertino’s Saich Way Station, the restaurant sits comfortably next to a T-Mobile and a Sleep Number, drawing crowds seven days a week. The building itself is small with a modern industrial design. Pipes and vents across the ceiling and pendant lights hanging above the countertops give off a warm golden light. All of this contributes to the cozy ambiance, especially in the evening. Although the space is no larger than a high school classroom, the restaurant seats 48 customers at full capacity.

When I got to the restaurant at around 5:45 p.m., there was a line snaking from the self order machines, out the door and around the side of the building. The long line gradually made its way into the 48 beckoning seats. It took around 40 minutes to get into the building and order, not counting the time it took for the kitchen to make and serve it. Here is where I ran into my first problem — the inefficient ordering system. There were various moments when I would see large numbers of seats ready to be occupied by the next person in line, only to be left open due to the large customers being bottlenecked at the self order machines. There were only two self order machines, which slowed the process of getting customers to seats and dissolving the crowd outside.

The problems didn’t end when I was eventually lead to the tables. In order to accommodate for the lack of space, seats were squeezed eight to a table, leading to a very cramped experience where my elbows would practically brush past my neighbor. The design of the building could be vastly improved by adding a couple of self order machines and reducing the number of seats per table.

In the food department, Afuri floats somewhere in the average to sub-par region, egregious when paired with the amount of time one spends in the cold waiting for customers to get through the abysmally designed ordering system. I ordered four dishes priced at just under $46 all together to review.

The Kakuni Pork Bun consists of a steamed bun with the chain’s logo enveloping a slab of chashu pork belly and a few slices of cucumbers. While the surrounding bun was passable with no notable strengths or flaws, the chashu pork belly did not have enough flavor. This coupled with the wet cucumber resulted in a flavorless mess. The main strength of a traditional chashu pork belly is its juicy umami taste and the tender fatty texture, but with Afuri’s starter it felt like I was biting into a tasteless, watery, fat sandwich. ⅕

The eight piece buta gyoza was exactly as the text on the menu suggested, with eight pieces of ground pork (buta meaning pig in Japanese) and vegetable stuffing inside a thin, starchy wrapping. It came with a soy-based gyoza sauce. While the gyoza was not overwhelmingly greasy like many tend to be, the surrounding skin was far too thin and not crispy enough to balance out the salty meat filling. The soy based dipping sauce only contributed to the saltiness of the appetizer. ⅖

The yuzu shio ramen is Afuri’s supposed magnum opus. It is what is supposed to set Afuri apart from any old ramen joint. However, it also fell short of expectations. It consisted of ramen noodles in a non-traditional chicken-salt broth with the aromatic yuzu-citrus along with toppings of endives, chashu pork, egg, seaweed and bamboo shoots. The noodles were more like soba noodles rather than traditional ramen in both texture and taste, a small improvement in texture gave more depth to the taste of the whole dish. The soup was aromatic with the addition of the yuzu-citrus, but was overall too salty. That added salt may have been compensating for the chashu, as the lack of flavor of the chashu was carried over from the Kakuni Pork Bun. The egg was also a major let down, as it was cold and overcooked, with the yolk leaving a chalky residue in my mouth. I’m not sure having egg in the first place was a good idea for a noodle dish with a salt-chicken broth base — in a traditional ramen, the soy-based soup soaks into the egg and makes it stand out, a feat that can not be achieved with a salt-chicken broth base. The only other redeeming quality of this dish besides the noodles was the bamboo sprouts, which had a sour acidic taste which paired wonderfully with the yuzu-citrus. However, this effect was slightly mitigated by the saltiness of the broth. ⅖

The yuzu shoyu ramen was an improvement on the yuzu shio ramen on almost all fronts. The soy-based soup went much better with the egg, as it successfully heated and soaked the white of the egg with its umami flavor, but retains a runny yet viscous yolk. The soy-based soup was obviously less salty than the salt-based soup, but had the added benefit of being thicker, helping to hide the lack of flavor of the chashu. Not only did the yuzu shoyu ramen improve upon the shortcomings of the yuzu shio, it retained the limited greatness of the yuzu shio ramen. The noodles were still the same, nicely textured soba style noodles and the bamboo shoots remained the highlight of the dish, proving their versatility in going well with both the soy-based soup and the salt-based soup. ⅗

While the food is passable, the faulty design results in an unnecessarily long wait. Given the long wait time, the quality of the food is unacceptable. Save yourself some time and go to Orenchi instead.