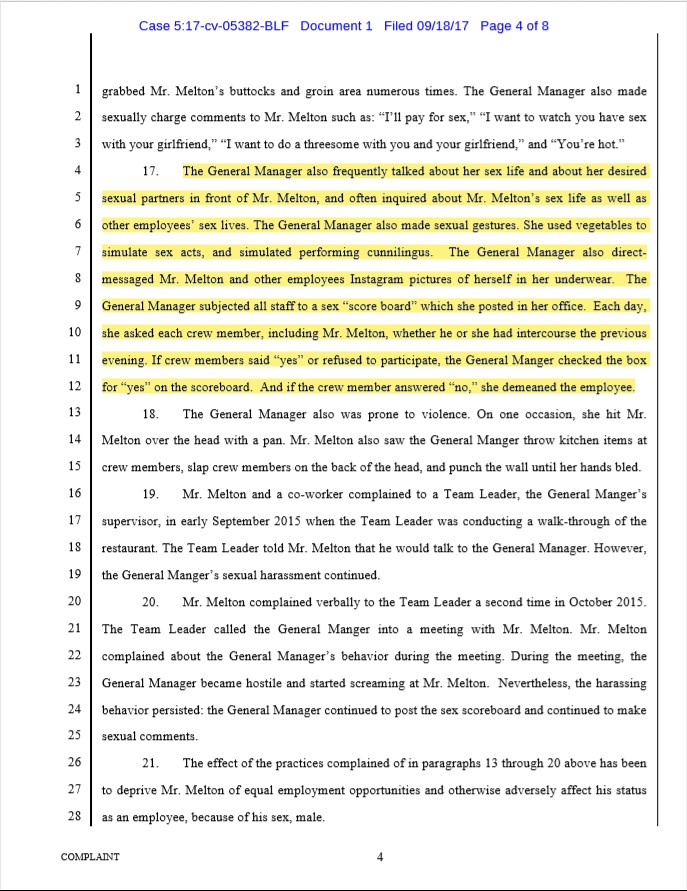 Used with courtesy of Ethan Baron

An excerpt from Melton's complaint and lawsuit against Chipotle, describing some of the General Manager's actions.

On Dec. 4, 2019, the Mexican fast food chain Chipotle agreed to pay 22 year old ex cashier Austin Melton $95,000 in a settlement for a sexual harassment lawsuit filed in 2017. The lawsuit against his manager consisted of claims that referred to lewd comments and gestures, physical harrasment and a sexual “scoreboard” mounted on the office door where the manager kept track of when employees were having sex. After enduring the harassment for six months, and later being locked inside a freezer, Melton reported the incidents to Chipotle corporate and later sued.

Junior Jeff Shen, who currently works part-time at the Cupertino location, says that both the manager and Chipotle’s working environment as a whole are to blame for incidents like these. When approached, Chipotle declined to comment. He also stated that stressful environments can create competitive power dynamics between employees, and that may contribute to instances of sexual harassment.

“Chipotle is very stressful [to work at] because there’s always a bunch of people coming in almost every hour,” Shen said. “I think [the] environment there is [not] toxic but it’s just super stress-inducing. You’re constantly put at work and there’s no downtime except for a 10-minute break.”

Senior Shumi Wu did not witness the harassment Melton had undergone, as he wasn’t working at Melton’s location at the time of the harassment, but was told about the actions by Melton during his visits to the Cupertino location.

“I’d say working at Chipotle was OK” Wu said. “[It was] very pleasurable because one: I love the food there so, it was pretty fun, but two: it’s very simple, there’s not a lot I’ll have to [do].”

Wu believes that establishing physical boundaries in the workplace should be “common sense.”  He added that Chipotle’s training, short educational videos, wasn’t enough to protect employees from dangerous situations, since the sexual harassment training primarily consisted of learning how to report incidents, and there was no specific sexual harrasment training.

“When you first start [working at Chipotle], you sit behind this computer in the office, and you watch all these videos [where] they teach … you what to do in all these situations,” Wu said. “In terms of reporting abuse, sexual harassment or violence of any sort, you want to report it to your manager. They also tell you if the general manager is [who’s] causing harassment, you don’t need to tell [the manager, and instead] go straight to corporate, which is what I think Austin did.”

Along with a $95,000 settlement, Chipotle agreed to provide additional training for its employees. However, Shen has not heard word of or received any new policies or training to prevent sexual harassment in the workplace since Melton’s lawsuit.