Members learn about the health benefits of dark chocolate 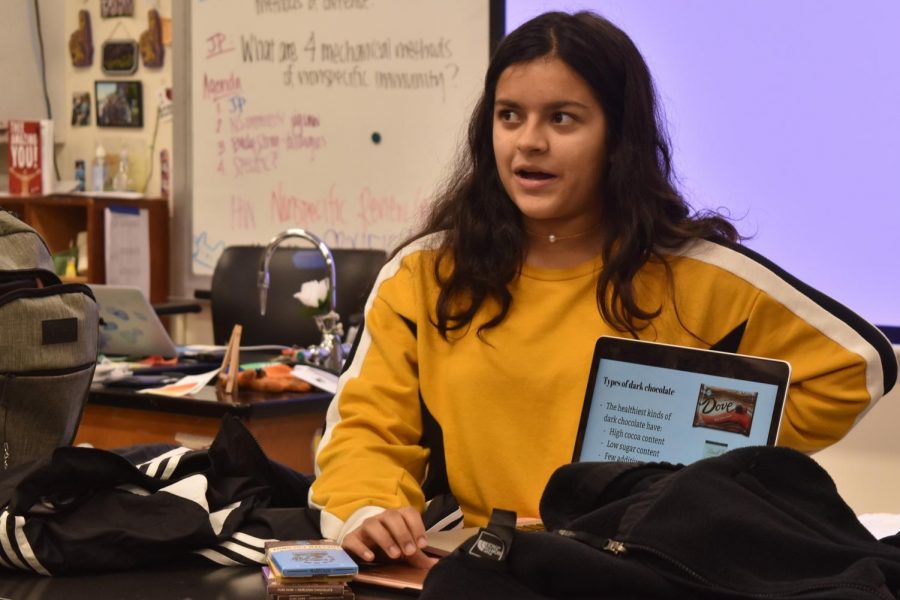 Sophomore and treasurer Jayanti Jha starts the meeting off by presenting about different types of dark chocolate.

ccording to president and junior Emily Shen, Bite Club’s focus on “the world of food” teaches members about the lesser known aspects of food, ranging from nutritional and health benefits to food culture. On Dec. 4, Bite Club held a lunch meeting about chocolate in room B103.

According to Shen, Bite Club officers typically rotate to decide who’s in charge of each meeting. One officer will choose a topic or food they’re interested in and research it to lead the meeting, while other officers will add onto the presentation. This meeting was planned and led by sophomore and treasurer Jayanti Jha, who started off the meeting with a brief presentation about dark chocolate. Jha covered the types and benefits of dark chocolate, as well as how to identify healthier chocolate options.

During her presentation, Jha also shared that eating dark chocolate every day may relieve stress over time. According to Shen, this, coupled with chocolate’s popularity among students, was why Bite Club officers chose to hold a taste testing of chocolate bars with 60%, 70%, 80% and 92% cocoa. 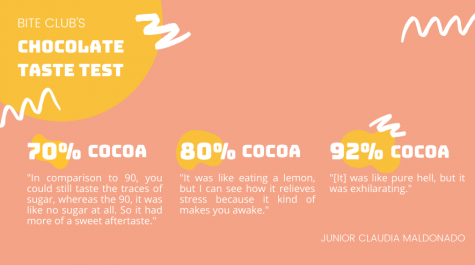 In past years, Bite Club has held a few annual events that regularly have a large turnout, like the spicy noodle challenge in collaboration with Korean Club — which typically has the highest attendance, according to Shen — and the making of kale chips with a microwave. Junior Christine Au noted these hands-on type of events as some of her favorites.

Shen, who enjoys baking and cooking at home, hopes to incorporate more hands-on activities and allow members to make food during meetings. However, one major challenge for Bite Club is that the club isn’t allowed to use the oven at school. Shen is currently discussing with the office to see whether or not they can bring their own cooking materials from home or use the school oven, which would allow Bite Club to expand their options when planning meeting activities.

Reflecting on past years as a third-year member and second-year officer, Shen’s aim this year has also been to shift away from only discussing healthy foods during meetings. As the second semester draws to a close, Shen believes she’s been successful in this goal so far.

“We were able to bring a lot more ideas to what Bite Club could be because the world of food is really big and you can take it in a lot of different directions,” Shen said. “Last year, it was a little bit more restricted in what kind of content we covered, like we only talked about foods you would find healthy. We talked a lot about salad and kale, [which are] more nutrition based. We’ve been able to expand past just nutrition to talk a little bit more about food culture and food trends.”

For example, Shen points to a meeting where they compared different types of cereal and their sugar content. Moving forward, Shen also hopes to hold a boba lab, where members can test the sugar content of varying brands of tea. Member and junior Claudia Maldonado notes that these types of meetings, especially the Coca Cola slushy lab she participated in, are her favorite.

“We did a trivia, so I got to win my Coca Cola,” Maldonado said. “It was more like a science based experiment. Basically you had to get it to a specific temperature where it’s an in between state between frozen and liquid, and it produced this really silky texture.”

Outside of planning meeting activities, Shen says that another goal for Bite Club is to increase attendance by promoting their meetings to more students. Shen explains that they’ve tried to use social media to aid with this, posting meeting reminders and recaps on their new Instagram account, as well as engaging everyone in the room.

“What’s also working is we do our meetings in this room, which a lot of people generally just gravitate towards during lunch,” Shen said. “Then, we try reaching out to those people who are just sitting on the side to try to get them involved.”

By getting more students involved in Bite Club, Shen hopes to educate members about the nutritional value of food, something she believes is typically overlooked among teenagers.

“I think it’s just something that MVHS students are kind of lacking or aren’t really paying attention to a lot of the time,” Shen said. “We all eat junk food and especially being teenagers, it’s important to learn more about the food that you’re eating and how it can be healthy for you.”