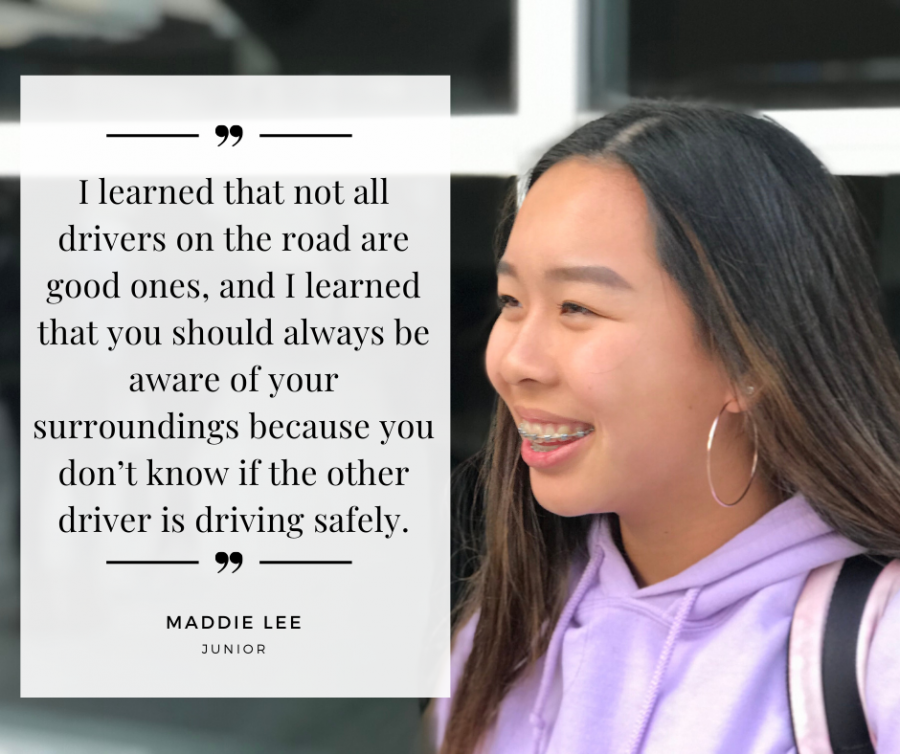 Nitya Yerraguntla
After receiving her driver’s license in February of 2018, junior Nitya Yerraguntla recalls that one of the most dangerous moments she’s experienced was when she was late for a class and was rushing to get her friends home.

“I was merging onto the freeway and we were in a rush,” 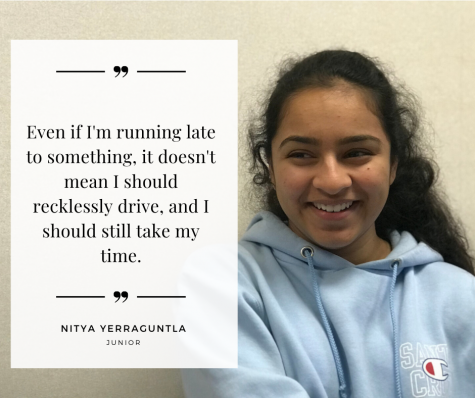 Yerraguntla said. “And I think that when I was merging me and the other car were both parallel to each other when we were on the freeway. I didn’t brake and I didn’t press the accelerator, and so we were getting really close to touching, and I had to suddenly break which was dangerous.”

This incident gave Yerraguntla first-hand experience on how easy it is to get into a car accident — it serves as a reminder to her not to rush, even if she is running late.

“I learned that oftentimes, I can’t take out my stress in driving and show my emotions on the road,” Yerraguntla said. “And even if I’m running late to something, it doesn’t mean I should recklessly drive, and I should still take my time.”

Maddie Lee
With over a year of driving experience under her belt, junior Maddie Lee explains that her most dangerous experience was when she shared the road with an irresponsible driver. While she almost got into an accident, she was ultimately able to avoid it with quick instincts. 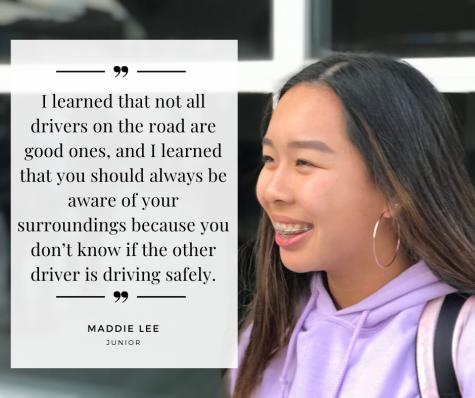 “I was driving home and at the intersection at 7-Eleven; I was driving straight and there’s four lanes in total but two of them split off to take a left turn,” Lee said. “Then this car comes and makes a right turn, and he was getting into my lane so I had to merge into the lane to the left. So I went there so he wouldn’t crash into me, but then he tried to merge again into the freeway lane with me and he didn’t see that I was there so I had to swerve back into the lane that he was in before.”

From this incident, Lee has learned more about the dangers of driving on the road; she now knows that her safety can be in her own hands.

“I was scared that the person was going to hit me and crash into me, but I was able to avoid it,” Lee said. “I learned that not all drivers on the road are good ones, and I learned that you should always be aware of your surroundings because you don’t know if the other driver is driving safely.”

Rishi Ajjarapu
After obtaining his driver’s license in April of 2019, senior Rishi Ajjarapu remembers an incident in which he almost got into a crash. It occurred when his parents were in the car as he was driving to San Francisco. 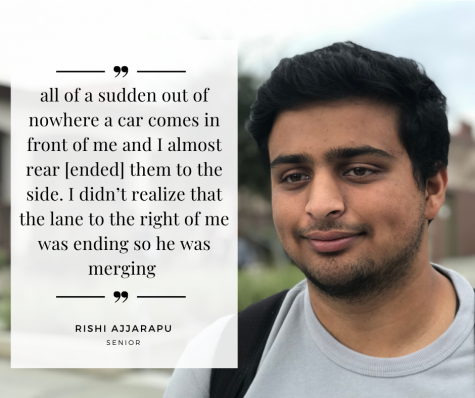 “For some reason I was just really drained and super distracted,” Ajjarapu said. “While I was driving, it started to become foggy so it was a bit harder to see. I was in the second lane to the right and I was driving and all of a sudden out of nowhere a car comes in front of me and I almost rear [ended] them to the side. I didn’t realize that the lane to the right of me was ending so he was merging and I almost hit him, which would have resulted in a bad accident.”

As this was the closest he’s ever been to a car accident, Ajjarapu felt some first-time emotions during this incident.

“I was really scared because my parents were right there and I didn’t want them to take away my driving rights,” Ajjarapu said. “I also felt really guilty because my negligence could have caused an accident and a possible injury. I was also super nervous and shaken up because it was unfamiliar territory for me — I’d never really had an incident like that before.”

Ajjarapu has taken away the lesson that in addition to other drivers posing a threat, he himself can also act as a liability.

“I guess I realized that when you’re driving, you’re essentially a hazard to yourself and others and that you have to pay attention no matter what,” Ajjarapu said. “This was my first experience in a situation like this so it was kind of a wake up call.”

Debbie Mandac
Ten years ago, AP secretary Debbie Mandac was driving in snowy Sonora, California, with friends from places with heavy snow such as Montana, when she ran into an issue with the wheels on her car, putting her in a dangerous position.

“[My friend] was laughing at me because I was freaked out over two feet of snow,” Mandac said. “I didn’t know if you were supposed to turn it on four wheel drive while you’re driving or before you start. Anyways, I ended 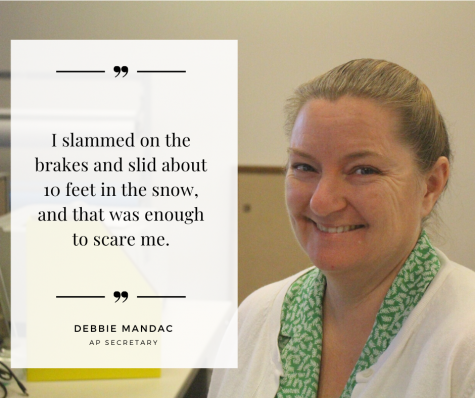 up sliding. I slammed on the brakes and slid about 10 feet in the snow, and that was enough to scare me.”

Mandac has learned that it’s better for her to avoid putting herself  in situations where she’s uncomfortable, especially when it comes to driving.

“My advice is if you’re in snow just drive very, very slow or let other people drive the car because if you’re like me you might not feel confident driving in the snow,” Mandac said.