Boys basketball: The Matadors lose in an intense matchup against Willow Glen HS

With faltering defensive plays throughout the game, the Matadors fell with a final score of 46-58 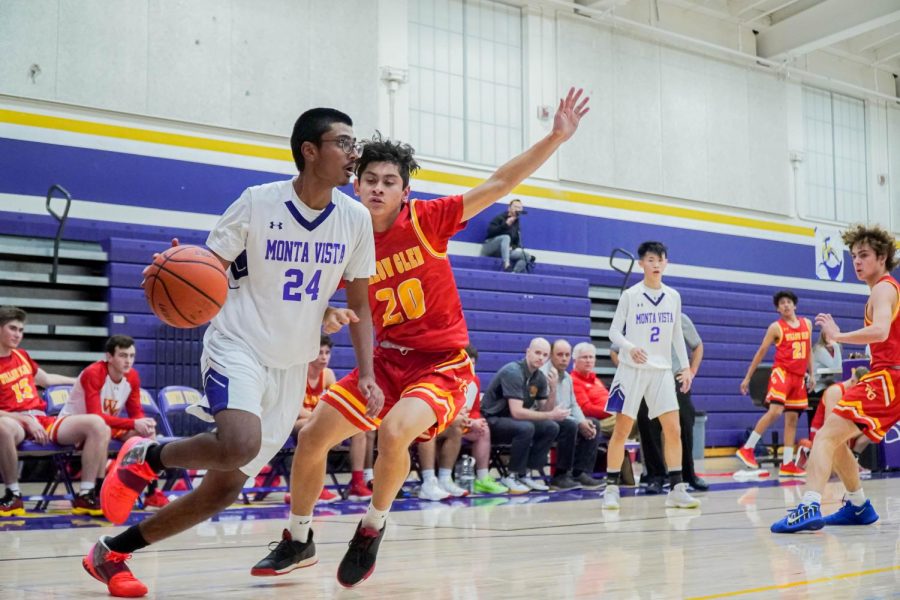 Senior Sanjay Gollapudi passes by a Willow Glenn defender in hopes for a shot opportunity early on into the second period.

he MVHS boys varsity basketball team entered its home opener on Dec. 10 hoping for their first victory to the 2019 season. Despite the slow start at the beginning of the game, the Matadors had difficulties defensively which landed them to eventually lose the game with a final score of 46-58.

Kickstarting the match, Willow Glen HS had scored a jumper right away followed by another few points before MVHS was able to score. Senior Sanjay Gollapudi scored a floater for MVHS bringing the score 2-6. By the end of the first period the score was 8-15 with WGHS in the lead. During the second period MVHS was able to bring the score up 17-23 with some shots made by Gollapudi, and threes by junior Matthew Wong.

When reflecting on the game, junior Arnav Raut believes that the team has the capability to do well but have some areas to improve on such as defense and judgement. With a few injured players going into the game, the team had to do the best with the players available.

“I don’t think there was a talent gap, because I think they had some good players,” Raut said. “It was only their starting lineup. They did not have a deep team, we have a very deep team, any can have any guy can come in and score on our team, anyone can come off the bench and have a good game. I think talent wise we’re up there with them we just…were missing a few key players and we let them, especially in the third quarter, we let them get out on us.”

Similar to Raut, Gollapudi believes that the team has potential and what it takes to do well as long as they work on their offense and other areas throughout the game.

“We have the tools to succeed and win games all of our games were right here, we just have a small lapse in judgment in one of the quarters,” Gollapuidi said. “We were just trying to go through the motions, being a little bit like robots. We weren’t trying to attack with conviction.”

Throughout the third and fourth quarter the Matadors were able to get to the free throw line which helped them bring up the score. During the third quarter WGHS was up 30-45 and after some back and forth with getting closer and falling behind, MVHS ultimately lost with a final score of 46-58.

On Dec. 10, the MVHS boys basketball team had its first home preseason game against Willow Glenn HS. The team had a few injured players going into the game, which put them at a disadvantage. The team lost 46-58 and will be playing next against Lynbrook on Dec. 12. Photos by Justine Ha and Tabitha Mendez