The US versus Africa: Toxic Individualism

ords, the corporate ladder, and individualism are cornerstones of the American experience. Our culture is one defined by self-driven success, where relying on a network or community is only used for individual promotion. If we don’t move out of parents’ houses by age 20, we’re looked down upon. America’s shift towards this individualistic mindset is a result of industrialization.

The American dream only rewards economic success, so people are focused on their own wealth and how to achieve this ideal of success by themselves. According to National Review reporter Michael Hendrix, “Prosperity has afforded our independence from neighbors and networks, as the Social Capital Project of Senator Mike Lee (R., Utah) found … an isolation of affluence is indelibly marking modern society.”

However, many cultures around the world don’t follow this mindset, like African countries. According to the United Nations Department of Economic and Social Affairs, the average household size in Africa is more than five people, whereas the average household in the US is made up of around three people. American children in the current day don’t grow up with a sense of community, many are expected to move out of their houses and start independent lives at 18, and achieve corporate success by themselves — a narrative that isn’t necessarily sustainable for many.

Though each African country has its own unique culture and belief system, many have a different, more family oriented system in place. Many African countries are still developing, meaning they haven’t shifted to a more industrialized societal structure. Consequently, the stereotypical nuclear family structure of a mother, a father, and one to two children is nonexistent. Many households sustain children for longer periods of time and include extended family, which exposes these children to the importance of building community.

National Review reporter Michael Hendrix attributes much of America’s individualistic mindset to the shift and growth of industrialization, and away from rural settlement. Urbanization promoted a sense of capitalism and individual economic success. Married couples and everyone in the household contributes towards maintaining it in a more divided way, because of the increased number of people, and economic gain is shared equally; the narrative of individual climbs to success isn’t as emphasized in this culture. 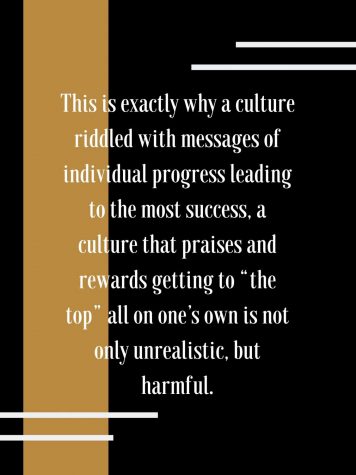 In an exploration of the African Immigrant experience in Philadelphia, the Historical Society of Pennsylvania interviewed a Nigerian immigrant. She viewed America’s individual-centric culture as very hard to adapt to, stating that “[her] mother came to visit and stayed a year and that was it, because she did not like it. It was isolating for her. Back home, people are in and out of your house, in and out, friends and families are walking down the street. They stop and say hello.”

This supportive community network that many African inhabitants have built up and have come to rely on is just not present in America, and continues to hurt us. According to a study done by researchers Greg Scott, Joseph Ciarrochi and Frank P Deane for the Australian Psychologist Journal, idiocentrism is closely associated with a weakened support system, thus leading to an overall trend in mental illness and unwillingness to reach out to others for others.

This is exactly why a culture embedded with messages of individual progress leading to the most success, a culture that praises and rewards getting to “the top” all on one’s own is not only unrealistic, but also harmful. This culture  that fosters community is similar to the ones many of our immigrant families have grown up with; according to International Education Service’s Cultural Atlas, many Asian cultures place a large emphasis on extended family and building support systems from the start. For many immigrants, they’re alienated by the U.S.’ large emphasis on achieving success and happiness all by ourselves.

This isn’t to say that individualism is all awful. To be self-reliant is a respectable virtue, a trait that all humans should harness and develop. However, too much individualism, the type that frowns upon larger networks and support systems, is dangerous. It creates an isolated society that is obsessed with individual success to an unhealthy extent.