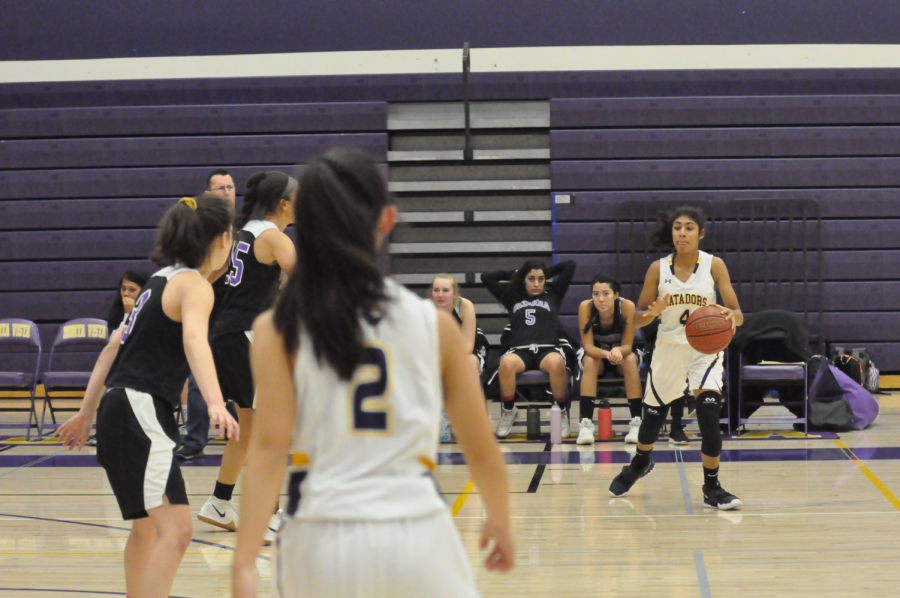 Freshman Varshini Peddinti receives the ball and prepares to pass to the center. Photo by Vivian Jiang

Despite having a strong start to their season, the MVHS varsity girls basketball team was defeated by Sequoia HS 45-17.

Senior Daphne Lam made the first points of the game, scoring a 3-pointer shortly after the game started. Sequoia soon caught up, bringing the score 3-9. Even with a few strong offensive plays by the Matadors shortly after, they still trailed the first quarter with a score of 6-11.

In the second quarter, the Matadors increased the pressure against Sequoia with Senior Ashley Liu making another 3-pointer with an assist from junior Kelli Kosakura. However, Sequoia took the lead after scoring numerous baskets, further increasing their points and bringing the score to 9-21 at the end of the second half.

Freshman Emi Kosakura notes that Sequoia’s offense was fast-paced, making it hard for MVHS to score, but the team was able to adjust by the end of the quarter.

Senior Jocelyn Chang believes that because they lost to Sequoia last year, they went into the game with an intimidated mindset which hindered their performance as the game went on. After the game ended, the team filed out of the gym to debrief their play and discussed how they would work on their communication.

“We want [the post players] … to communicate more,” Chang said. “They can see the majority of the court whereas the guards on top can’t really see what’s going on behind them and they can’t really see … the cuts.”

The MVHS girls basketball team loses 45-17 against Sequoia HS. Since this was a non-conference game, the team maintains its 1-0 standing in the league. Photos by Vivian Jiang and Rucha Soman pic.twitter.com/KtxcVmT9J9