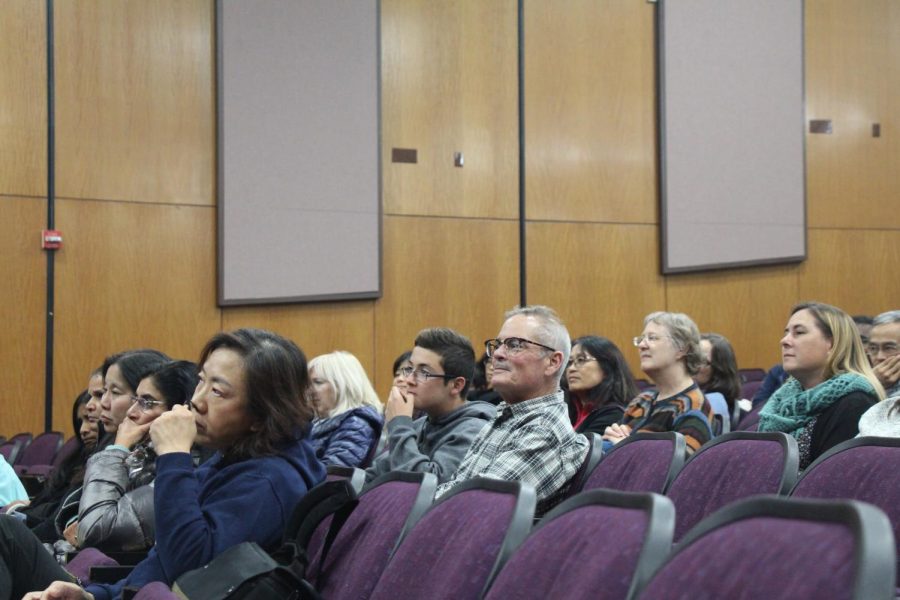 On Nov. 19, students and parents gathered in the auditorium to watch the movie "Screenagers NEXT CHAPTER: Uncovering Skills for Stress Resilience. Photo by Michelle Chen

n Nov. 19, the Parent Teacher Student Association (PTSA) held a screening for the movie “Screenagers NEXT CHAPTER: Uncovering Skills for Stress Resilience” in the auditorium. The film centered around ways for parents to help teenagers deal with stress, particularly in relation to screen usage. Afterwards, student advocate Richard Prinz led a discussion to answer any questions and further elaborate on topics brought up in the film.

According to PTSA president and parent Kathy Jacques, the goal of the movie screening was to promote better transparency between parents and teenagers through communication of expectations, as well as give students and parents a new perspective on the topic of teenage mental health.

“All parents want the best for their kids,” Jacques said. “We all worry about our kids. We all want them to have the best opportunities [and] we all want them to be safe. And sometimes as a parent, you don’t always communicate that in the best way, so I was really hoping that [the movie] would help people think about different ways that they can communicate with each other.”

Jacques felt that the takeaway of the film was fitting, particularly because of the recent rise in technology and screen time which she has observed, as well as its correlation with the stress for students to meet all the expectations placed upon them.

“There is so much stress right now, so much more pressure on our kids to achieve, to focus on their future, to do well in school [and] to do well socially than ever before,” Jacques said. “And on top of that, [students are] dealing with something that I never had to deal with, which is being constantly accessible by social media to any opinions that other people may have of you. Anything you put out there is going to be commented on by people who know you, people who don’t know you — some of that’s very positive, some of it can be very negative.”

According to Jacques, many people enjoyed the movie screening, as she recalls a parent who provided feedback on the movie afterwards and found it to be particularly helpful because of the discussion afterwards, and the fact that Prinz had brought a student from MVHS to answer questions as well.

“I had one parent come up to me afterwards who was very grateful that we brought the movie and felt like he really got something out of it,” Jacques said. “The chance to hear the student who was there speak about her experiences and how she felt when her parents approached her about certain things —  [the parent] just found that really helpful. So I’m hoping that we can kind of do more events like that in the future things that can kind of create an opening for conversation for parents and kids.”

Prinz too was able to learn from the discussion. He recounts how, during the discussion, a parent brought up the viewpoint that video games are beneficial in that they help children strengthen relationships. Although Prinz initially responded by explaining how video games are addicting, when he continued the conversation, he realized that the effect of media is often contextual.

“[The parent] emailed me and he talked about how [games have] been helpful for his son, but it was in the context that his son had met somebody in person at a camp, and they lived in different states,” Prinz said. “They stayed in touch by playing games and talking and laughing, and then they got together again. So it’s different than just [playing] games with people and you never have any personal contact or you don’t have a relationship. So, I think it’s stimulated people to think about [how] it’s not always bad — it depends on the context.”

Parent Neela Annamalai was particularly surprised by the statistics shown in the movie, such as the 59% increase in teenagers reporting depressive symptoms since 2011. In particular, she was startled by the strong correlation between the increase in usage of social media and the decline in mental health of students. She attributes this to an absence of in-person interactions between children.

“Depression has increased because [children] tend to stay away from forming physical relationships with friends and teachers around them as they are getting more into the digital world,” Annamalai said. “As a parent, it’s the first time we are going through this. There isn’t a generation before us who have had their teenagers going through this digital age transition.”

Similarly, Prinz has noticed the lack of verbal communication skills among some students, a problem that affects their everyday interactions and influences their mental well-being.

“I meet people here who don’t have social skills — they’d rather have a relationship [through] texting than in person,” Prinz said. “And then when they say something and it upsets everybody, they get depressed. And so they need to work on those skills in person with people and have a give and take [interaction], and talk about how we communicate.”

With this, Prinz believes parents can take the first step towards a healthier relationship with their children by changing some of their own habits, such as managing their screen time, and ensuring that they take care of their own mental health as well.

“Sometimes parents are frustrated [because] there’s stress from work, [and] they come home [and] just get angry,” Prinz said. “They’re not controlling their emotions [and] they’re not understanding what effective communication [is] and what [it] isn’t and so parents first need to work on themselves and also watch their own screen time. Because a lot of times they’re doing the same thing, and start to see the value of face to face communication so I think that’s what they can learn by going to parenting classes.”

For Annamalai, one of the most important steps is teaching students to reach out and ask for help and support from those around them when they are struggling. Annamalai also believes the school should play an important role in instilling this habit in teenagers.

“This is something [the] school should also be part of, so that [the administration] enforces this habit on children early on as a positive pattern,” Annamalai said. “[It] is a habit that needs to go in children. When you’re feeling down, it’s your time to reach out to your friends, your teachers and your family when you’re down and stay away from social media, because it’s not really going to help you in the long run.”

Jacques agrees, as she has observed the ability of relationships to alleviate feelings of loneliness or depression. By showing people that there are others who may be going through the same problems, students gain a sense of security in that they aren’t alone.

Jacques believes another strategy to solve the problem is to spread awareness and increase the resources and mental health guidance available to people, something which she hoped this event was successful in doing and wishes to continue doing in the future.

“I think the best way is putting more information out there, just like we did with Screenagers, [and] making sure people are aware of the resources available, working together to support each other,” Jacques said. “As a parent, for me, it’s having the information, knowing where the resources are, knowing that I’m not dealing with it alone, knowing the school, the PTSA [and] the community overall are all working together to support our students because as important as it is to get good grades and to achieve, it’s also important to be healthy and happy.”